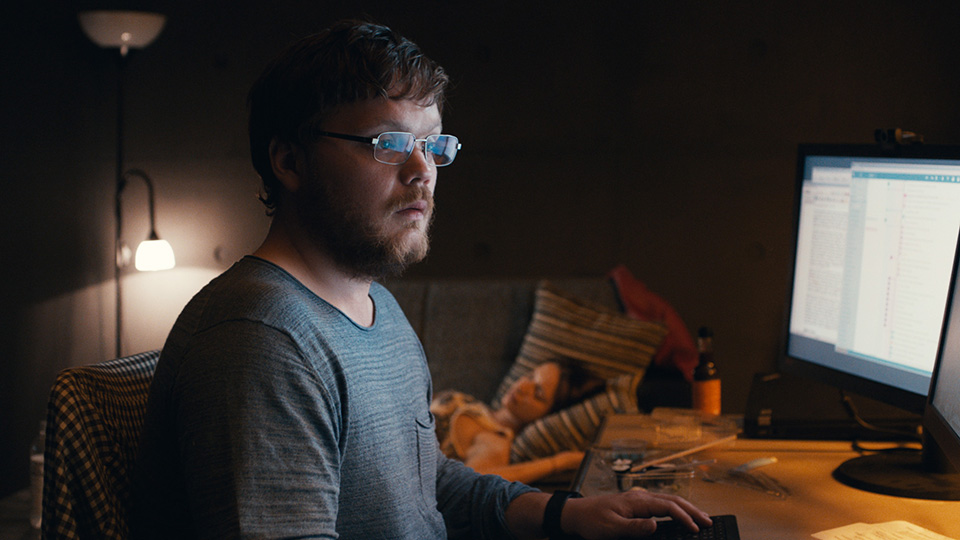 Unnerving, unflinching and uncompromising, A Young Man With High Potential will take you to very dark places and leave you with plenty of conflicted feelings. It’s a film you really need to see as it’s quite unlike anything you’ll have seen before. I highlighted it as one of the hidden gems at this year’s festival.

I caught up with Linus ahead of the film’s screening at Arrow Video FrightFest to talk about the concept, discuss the remarkable performance of Adam Ild Rohweder, and find out what the challenges of making the film were.

Hi Linus. How are you today and where does this email Q&A find you?

I’m doing great. A little tired after many hours of writing in a café in Berlin Neukölln.

Your film A Young Man With High Potential is receiving its UK premiere at Arrow Video FrightFest 2018. What’s the film all about?

It’s the story of Piet, a very intelligent but sexually inexperienced computer science student who falls in love with the bright and beautiful Klara. But when she turns him down, he is deeply hurt and takes a dose of a sleep medication, leading to a tumultuous night during which he loses his innocence in more ways than one.

It’s hard to put a label on the film, since it’s doesn’t follow a typical genre formula. A programmer once called it “an unhappy love story”, others described it as “a very dark coming-of-age interpretation”. I think it’s an intense personal drama bordering horror.

Where did the concept for the film come from?

I’ve been carrying the idea for a long time. The characters all inspired by real life observations of people I know – and to be honest, also of myself. Without addressing it directly, the film tells a lot about the time we live in. The crime story is made up and more of a thought experience to put the character’s and spectator’s integrity to the test.

Adam Ild Rohweder really is incredible as Piet. How did he get involved with the project and what do you feel he brought to the film?

He carries the film and I’m more than grateful to have found him. For most of pre-production, we had a different actor in mind who liked the script but was afraid to play Piet. We spent a lot of time encouraging him, but he shied away from the project 3 month before the shoot, because he felt uncomfortable with the character. We then found Adam last minute through a Danish casting agent who said “You want free advice? Well, I’ll give you three names for free. But everything I’ll do for you beyond that you’ll have to pay.” Luckily, Adam was one of these first three. We Skyped a couple of times and at first I thought he was too impressive and handsome – a viking warrior, not an introvert student. But from the beginning he was so dedicated and convincing, that I knew he’d be able to become that character. I asked him if he was afraid to play the part and he said “No. Going to dark places that I wouldn’t go to in real life is what I love about acting.” I love watching him as Piet.

A Young Man With High Potential is quite difficult to watch at times. What unfolds on screen is unflinching and it’s sure to make people uncomfortable. Why did you decide to expose the viewer to as much as you did?

I was thinking about that a lot lately. It came very natural in the writing process. We are telling the story completely from Piet’s emotional point of view. So it’s consequent to experience all the feelings of anxiety, panic and disgust with him. I kinda force to audience time and again to cross several lines with the protagonist. Borders of moral and taste. And it’s long and agonising. At the world premiere at the Munich International Film Festival, some people left. A week later in Neuchâtel, people had the same question, although they could stomach the film better and even laugh at times. I think my artist approach is justified, but I sometimes wonder if I went a little too far, especially considering, that the most disturbing parts for many viewers are not what I think is actually subversive about the film. Let’s see what the audience at FrightFest will say about it.

Somehow you managed to make Piet a sympathetic character and I felt very conflicted with how I felt towards him by the end. How did you manage to craft such a brilliantly balanced and complicated character?

Thank you. I don’t write characters that I can’t embrace. Sure, it would have been easy and conform to the horror genre to reveal Piet as a monster or psychopath. But not only would allow the audience to distance themselves from him, it would completely betray the character who is in fact very human and empathic. I want the audience as close to him as possible. His potential for doing something horrible is per se not higher than our own.

What was the most challenging part of making the film?

Casting and post-production. We cast actresses from four or five different countries. We had a lot of issues with actresses feeling uncomfortable with the part of Klara. Once we had Paulina Galazka and Adam, everything else fell in place. We were very lucky with the shoot as well. But it took me forever to finish the editing. We had “finalised” the film three times already, including final mix and everything, when we came up with another game changing structural idea. So I went at it again. I’m glad I had the luxury of time, just enough money and great collaborators to pull this off. I love my team.

What is the one thing that you hope people take away from A Young Man With High Potential once they’ve seen it?

I can’t boil it down to one thing, but the film should inspire a discourse and challenge the viewer on a philosophical and a physical level. Christoph Gröner of the Munich International Film Festival called the film “profoundly unsettling”. If everyone in the audience feels profoundly unsettled, I’m happy.

Right now, I’m writing an episode for my good friend Till Kleinert’s series “Hausen” which will be produced next year. It’s a horror series set in a brutalistic high rise block somewhere in the former GDR. Working with Till is great, he is one of my best friends and closest partners-in-crime.

Why should people buy a ticket for A Young Man With High Potential at Arrow Video FrightFest 2018?

I’ve been told that the film is quite unique and that it can not be unseen. And also it’s probably the only chance you have to see this on the big screen in UK for a while.

A Young Man With High Potential receives its UK Premiere at Arrow Video FrightFest at 1.15pm in the Prince Charles Discovery One Screen on Friday 24th August 2018. You can watch the trailer below: