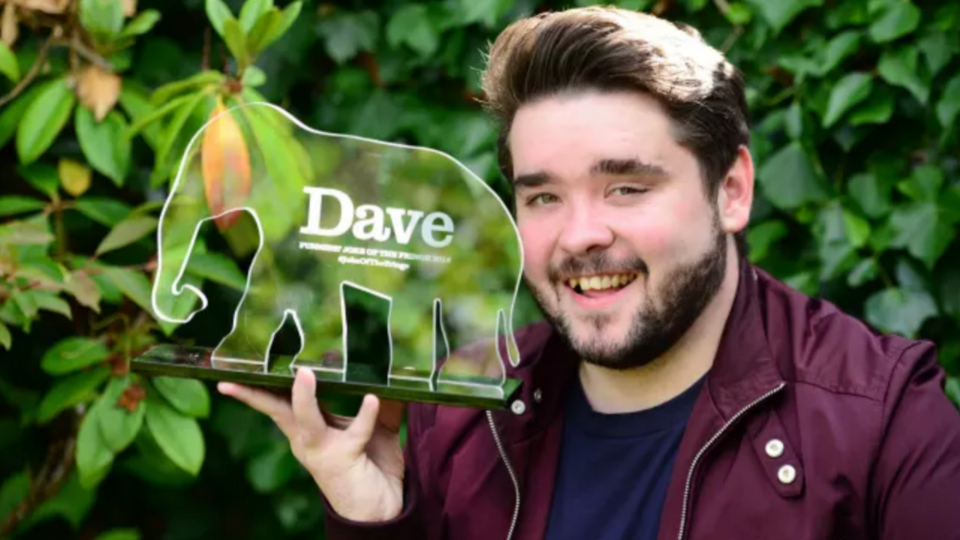 UKTV’s award-winning entertainment channel Dave has announced the winner of the eleventh annual Dave’s Funniest Joke of the Fringe award.

Adam Rowe’s witticism about the irony of being fired from a job centre was voted the winner:

“Working at the JobCentre has to be a tense job – knowing that if you get fired, you still have to come in the next day.”

It was crowned the funniest of the Fringe with 41% of Brits voting it the top tickler, after it was nominated from his show Undeniable at Just The Tonic @ The Caves.

In its mission to find the most hilarious one-liners, Dave enlisted the help of an expert panel of ten judges, consisting of the UK’s foremost comedy critics. They scoured venues at the world-famous Edinburgh Festival Fringe to nominate their six favourite jokes, with the shortlisted gags, which are listed anonymously, then voted on by 2,000 Brits to reveal the jokes they found funniest.

Adam Rowe, who recently received a 5/5 review from Entertainment Focus for his show ‘Undeniable’, said: “I’m absolutely over the moon and quite blown away by this! It’s my favourite joke in the show, as it ends the bit I’m most passionate about; trying to dispel a few myths of what it’s like to be brought up on benefits. It’s such a huge honour, I really never expected to be in with a shout of winning things like this, so it’s just a massive but lovely surprise. Thank you very much!”

The joke was included in his third Edinburgh show, Undeniable. The show takes a closer look at how your background, class, race, sociological issues, mental health and personality all either hinder or aid your journey towards that title. He thinks you can turn (what seems to be) your biggest weakness into your biggest strength.

Following the success of his Edinburgh Fringe run, he will be taking the show on tour and dates are as follows:

1. Working at the JobCentre has to be a tense job, knowing that if you get fired, you still have to come in the next day. Adam Rowe: 41%

4. In my last relationship, I hated being treated like a piece of meat. She was a vegan and refused to touch me. Daniel Audritt: 28%

5. What do colour blind people do when they are told to eat their greens? Flo and Joan: 26%

6. I’ve got a new job collecting all the jumpers left in the park at the weekends, but it’s not easy. They keep moving the goalposts. Darren Walsh: 25%

6.Trump said he’d build a wall but he hasn’t even picked up a brick. He’s just another middle-aged man failing on a DIY project. Justin Moorhouse: 25%

8. I lost a friend after we had an argument about the Tardis. I thought it was a little thing, but it seemed much bigger once we got into it. Adele Cliff: 24%

8. Why are they calling it Brexit and not The Great British Break Off? Alex Edelman: 24%

10. I think love is like central heating. You turn it on before guests arrive and pretend it’s like this all the time. Laura Lexx: 24%

To book tickets to the tour visit http://www.adam-rowe.co.uk/shows/

2018 marks the eleventh year of Dave’s Funniest Joke of the Fringe. You can also follow Dave on Twitter: @davechannel