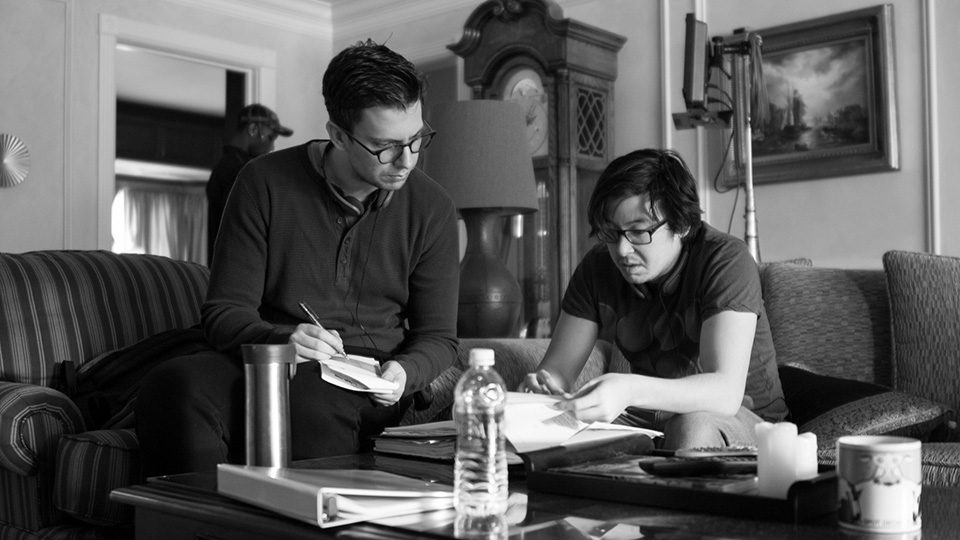 Abiel Bruhn and John Rocco are bringing their new feature film The Night Sitter to Arrow Video FrightFest 2018 for its World Premiere.

The talented duo wrote and directed the movie, which stars Elyse Dufour, Jack Champion, Jermaine Rivers, Amber Neukum and Joe Walz. An homage to classic horror films with an 80s twist, The Night Sitter is sure to be one of the most talked-about films of the festival.

I caught up with Abiel and John ahead of Arrow Video FrightFest 2018 to find out more about the film, discuss their influences and talk about the challenges of making a horror film.

Hi guys. How are you and where are you today?

We’re both out in the summer heat of Los Angeles, counting down the days until FrightFest! It’s been great to spread the word about The Night Sitter and get it out to the public.

Your film The Night Sitter is going to screening at Arrow Video FrightFest this month. What’s it all about?

The short version: it’s Home Alone meets Suspiria with a hard R rating. The longer version: it’s set at Christmas and follows a con artist posing as a babysitter who chooses the wrong house to try to rob and winds up fighting for her life against an ancient evil summoned by the kids she’s watching. It’s dripping with vibrant colours, it’s got some mean-spirited deaths and plenty of splatter, and it even has some heart for those who like their eviscerations with a side of emotional resonance. We’ve made a series of short films with our team Roller Disco Massacre, and The Night Sitter is our first feature – the culmination of all the work we’ve done over the past few years.

I feel like The Night Sitter pays homage to classic horrors, particularly the work of John Carpenter. How did the concept come about?

JR: The root of the story comes from a place of innocence. We knew we wanted to do a “one night in one house” kind of story and that the young characters at the centre of the film would be important. I tried to recall the scary thoughts I had when I was Kevin’s age, and I realised my childhood home in Nashville was the perfect location. We could shoot the entire movie there, as well as sleep the cast and crew. After several months of convincing, my parents graciously gave us permission to film in their house. We were able to incorporate all the parts of my home that used to scare me as a child and weave them into a supernatural story involving witches, which was extremely fun and nostalgic.

AB: I didn’t have the personal connection the location that John did, but I fell in love with the idea of calling on our childhood fears and hopes to craft a narrative that is totally unique to our sensibility. I think that’s why The Night Sitter strikes people as being somewhat retro or nostalgic even though it’s set in the present day; it feels like the type of film you’d watch on late-night cable, or pick up at a Blockbuster on VHS. That sensibility factored into every choice we made while we were developing the story and during production. And of course, we really liked the idea of following a con artist as the true protagonist – Amber sort of thinks of herself as a bad guy, so it’s a lot of fun when she’s forced to confront some real bad guys and become the hero.

One of the things that’s so striking about the film is the use of lighting. Can you give us a little insight into the inspiration behind that?

We’ve worked with our cinematographer Scotty G. Field for nearly a decade, and we’ve always incorporated vibrant and saturated colours into all of our content. It’s a tool in the cinematic toolbox that people tend to forget or ignore, especially in the indie world. We sat down with him in preproduction and did our homework. Everyone’s caught onto the Suspiria/Argento influence, but films like Black Christmas, Society, The Funhouse, From Beyond, etc. were hugely influential as well. We really wanted The Night Sitter to pass the “can you watch it on mute?” test that so many horror classics from the 70s and 80s pass – the visuals alone are engrossing, even without the plot being communicated through dialogue. The Christmas lights and decorations scattered throughout the house motivate most of the color, but we took a more impressionistic approach. We were trying to express moods and feelings, especially towards the end when things have gone properly crazy in that house. There are a lot of color motifs throughout; red symbolizes warnings, while green represents the witches or their influence.

This is your first feature film. What challenges did you face in making it?

Coming from a the world of short-form content, the biggest challenge was stamina. We had preproduction and then a three week shoot all in the same house, the house that we were also living in, so cabin fever starts to set in a bit – especially since we were doing night shoots. We didn’t see much sunlight for about a month! Also, we’d never worked with animals or children before doing this film, so there was a learning curve there, but we’re really happy with how it turned out.

You’ve assembled a great cast for the film and Elyse Dufour in particular, really shines. Why did you pick her for the role of Amber?

Elyse was really the only choice for Amber from the minute we saw her audition. She had this mixture of confidence and vulnerability that really sold Amber’s journey throughout the film. She also has that elusive onscreen presence you hope for; she’s just flat-out watchable when she’s on camera, no matter what she’s doing. And she can really do anything: she has to carry comedic scenes, dramatic scenes, action scenes…she grounds the audience so all of the weird stuff happening in the movie feels honest.

Ben Rittenhouse was responsible for the film’s special make-up effects. What do you feel he brought to The Night Sitter and which of his effects impressed you most?

Ben brought the sturdy foundation we needed to ensure our effects looked realistic and were of a certain quality. Finding out that a professional who worked on movies like Kill Bill and Blade II was currently located and teaching in Nashville, was a huge relief. He was able to utilise the class he was teaching by having his students come to set on the heavy effects days. The practical effect that impressed us most would probably have to be when one of our favourite characters gets his throat ripped out. There are plenty of other gory moments, but that one is definitely the juiciest.

The Night Sitter has a really stylish feel to it from the poster art through to the production. It’s clear you both have a real passion for horror films. What is it that you love about the genre?

JR: I’ve been a fan of the horror genre ever since I can remember. The practical effects in horror movies, especially ones from the 70s and 80s, are the reason this genre will always be the best in my opinion. I would always be mesmerised by the particularly violent or scary scenes of movies because there was so much you could pay attention to. Even now when I see a terrific effect I immediately want to know how they pulled it off. There’s something amazingly nostalgic and almost magical about being able to create a prop from scratch as well as figure out the mechanics behind it in order for it to function properly for a specific shot. Another reason why I love this genre is that the mood is able to change drastically at any moment. It’s the only genre where I get that nervous, but excited feeling like being on a roller coaster.

AB: I’ve always loved that horror movies create a really empathetic experience; you don’t have to think about a truly scary or disturbing moment…you just FEEL it, even if you don’t want to. Horror films also have this amazing legacy of invention and innovation; I’ll always remember reading Bruce Campbell’s If Chins Could Kill memoir and learning how they created all these rigs to pull off the shots in The Evil Dead.

Which horror film do you wish you’d written and directed, and why?

JR: The Thing. It’s literally the perfect horror film. Actually, it’s just the best film ever made. The setting, characters, monster, music and of course the practical effects are all the best in each field. Also, there’s not a shred of romance, which tends to be the least interesting part of most films for me. It’s just a bunch of dudes trying to figure who the monster is when it can replicate anyone and anything. Pretty terrifying… Also, being able to work with legends like Rob Bottin, Ennio Morricone and Kurt Russell all on the same project would be the ultimate dream. The only problem is that you’d have to accept moving forward with your film career that you’ll never make another movie as good. And that’s pretty scary as well…

AB: The Thing is objectively the right answer, but I’ll go a different way and say Fright Night. The elements of voyeurism and paranoid obsession play off the comedy really well, and the whole movie has this incredible mood – it has that “suburban neighbourhood built on a set” artifice that just feels so cinematic and unnatural (in a good way). I think there’s something about that movie’s sensibility that really speaks to my personal taste – there’s danger and life-or-death stakes but it still feels a bit like a movie about people hanging out and there’s constant levity. It’s the type of horror movie that feels like a hug from an old friend every time you watch it.

Why should horror fans going to Arrow Video FrightFest check out The Night Sitter?

Eye-popping visuals (sometimes literally), an incredible soundtrack, brutal deaths and a bonafide scream queen in the lead…without tackily overselling it, we can say with absolute certainty that watching The Night Sitter will be the best experience of their lives, including but not limited to their weddings and/or the birth of their children.

The Night Sitter receives its World Premiere at Arrow Video FrightFest at 8.45pm in the Cineworld Discover Screen on Sunday 26th August 2018. You can watch the trailer below: