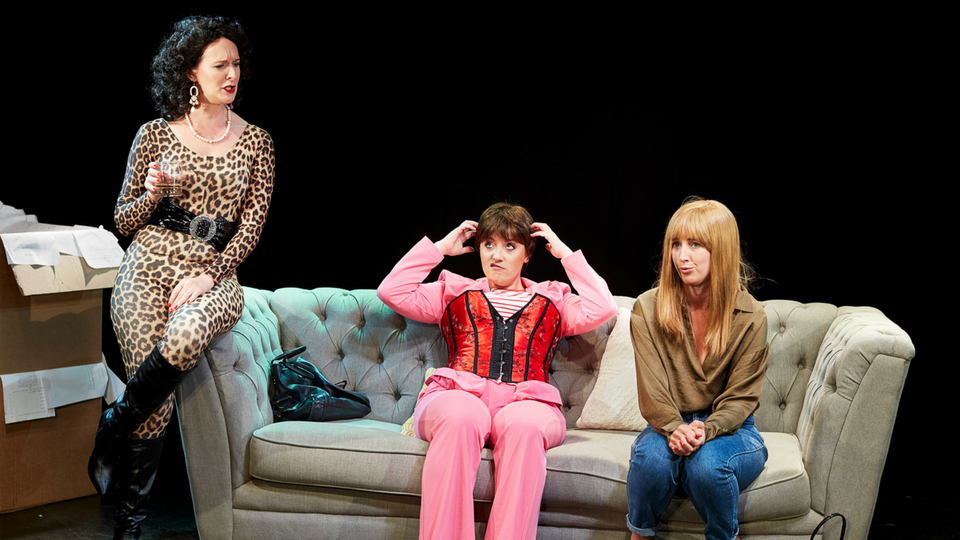 The new play Early Birds comes from the writers of television classics Goodnight Sweetheart, The New Statesman, and, of course, Birds of a Feather. Now, Maurice Gran and Laurence Marks are sharing the true story of how Birds of a Feather came together as they wrote it with Pauline Quirke and Linda Dobson in mind (having worked with the actresses in Shine on Harvey Moon). It’s the story of progression from the germ of an idea to the writing room to the TV studio.

It sounds more than a little self-indulgent that Gran and Marks have written a play about their own journey as writers, but there is merit in the piece as they examine a slice of TV history. Gran, Marks, Linda and Pauline may not have known it at the time but they were on the cusp of something very special for their careers, and for the nation. Birds of a Feather might not quite pass the Bechdel test as Tracey Stubbs, Sharon Theodopolopodous and Dorien Green’s chosen subject was more often than not about or related to men. Nevertheless, it was a pioneering 90s sitcom with an all-female cast in the starring roles.

Gran (Alastair Natkiel) and Marks (Nick Howden-Seenstra) rather smugly narrate the action as we witness a chance encounter one Christmas in a West End hotel between two women dolled up to the nines and their fellas; one tanned, one pale. Between them, Gran and Marks’ imaginations run wild as they cook up a back story for the foursome as two bank robbers and their trophy wives. With the inspiration for the characters of Sharon and Tracey smouldering away, we join the pair in ‘The Writer’s Room’ as they delve further into their potential back stories and decide on a location. Regardless of how self-congratulatory it may come across, it’s true that Maurice and Laurence put the working class vs middle class divide under the spotlight on TV. A divide that could come between even two sisters, where one has a fella who she believes is working honestly for the money he earns (when he’s actually on the make) and resides in an affluent area of Chigwell, while the other’s stuck living hand-to-mouth with a deadbeat husband in a local council block. Their love overcomes status, of course, and that’s the real heart to the show. It is fascinating to watch the thought processes and conversations exchanged as the outline of Tracey’s sex-mad yet unsatisfied neighbour Dorien (humorously portrayed by Sue Appleby) starts to take shape, too.

The ‘take home’ message is that this TV show was inspired by real people, and was made for real people. Much to the shock and frustration of several BBC TV execs. ‘Working class people pay their television licence too,’ utters one character as there’s a battle to keep the show on air following a wealth of complaints when the first episode was broadcast before the watershed.

The pair tackling young Pauline/Sharon, (Harriet Watson) and Linda/Tracey (Katriona Perrett) have clearly studied their subjects with extremely convincing voices and mannerisms to mimic the real actresses. You may not be aware that PQA venues is founded by Pauline Quirke, and it’s somewhat of a family affair on stage too as Pauline’s real life son, Charlie Quirke, stars in several roles, including the unemployment officer signing his ‘stage mum’ Pauline on the dole. Acting clearly runs in the genes as Charlie gives a genuine, likeable performance and, together with Harriet Watson playing a youthful and charismatic Pauline, they provide much of the light relief. A satisfying wave of nostalgia washes over the audience when the unmistakable theme tune ‘What’ll I do?’ by Irving Berlin kicks in, and Pauline and Tracey settle on the sofa to watch the closing credits roll.

The only real problem with this play is that we all know the ending. Birds Of A Feather was a hit show, it’s one of the nation’s best-loved sitcoms. Still, it’s interesting to examine the start of a piece of TV history and consider how many shows live and die on the word of a handful of people. Whether an idea makes it from the notepad to the screen is as much about luck and timing as anything else.