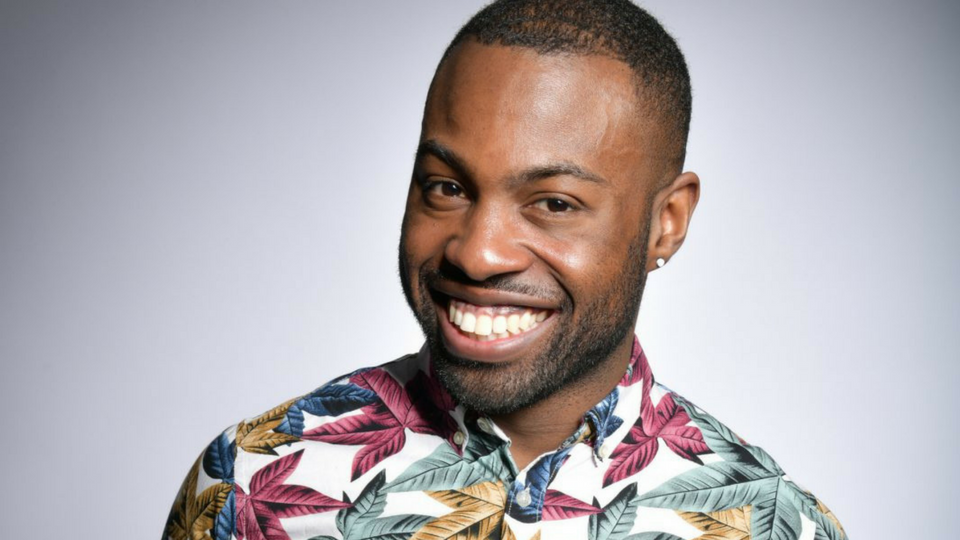 After being nominated for Best Newcomer at 2017‘s Edinburgh Comedy Awards, Darren Harriott returns with his brand new show Visceral at the Pleasance Beneath from 1st – 26th August.

Following the huge success of last year’s show, the Birmingham comic is taking us on a tour of his teenage years. With a personal account of his early teen experiences (circa 2001), the show looks at the aftermath of his father’s death. He explores how he found himself in a gang to appear ‘tough’ and how he managed to get out of its grasp.

“The show last year was very much my debut show, looking at politics and upbringing and introducing myself whereas this show is more about my teenage years and early teens, I talked about my dad’s death in the last one, whereas in this show I talk about how this affected me and the decisions I made as a result.”

“It’s about gangs, masculinity, and how i’m very grateful and lucky to be in the position i’m in now compared to where I was.”

Darren hopes his story provides insights into how teenagers end up in gangs and what young people risk in doing so. “I look at the reasons why youths join gangs and carrying knives and and how I got out of the gang. There are 13 and 14 year-old boys getting into this, with very fragile egos, who are wanting to be seen as tough. It just takes one moment for your whole life to change, that’s all it comes down to. I really want to get that across.”

During the interview, I was embarrassed to admit that I hadn’t seen a Nicholas Cage film from 1997 that Darren used to explain this point further. Con Air has a plot that sees action hero Cage, a decorated Marine, get into a situation where a group of men threaten his pregnant wife in a bar, which ends in Cage killing one of the men in a brawl. “His life changed in one moment. He was in the wrong place at the wrong time, and next thing he know’s he’s on a plane full of prisoners who take over the plane. He never could have imagined he’d end up in that situation”.  Here’s hoping Con Air is on Netflix (for when I finish the 17 half-watched series currently on my list).

Comedy became a part of Darren’s life when he was 17 and studying acting at college, “I was definitely a funny kid, trying to be tough but also funny. I never realised I wanted to do comedy until I did acting, I enjoyed everything about it but not the theoretical stuff. I also watched a Dave Chapelle special ‘For What It’s Worth’ and decided comedy was the way I wanted to go.”

When it comes to the Edinburgh experience, Darren sees it as an opportunity to becoming a better comic. “I’m following what I did in last year’s show, where the plan was to write a new joke, or something new, or change something in the show every single day. It worked out really well. This year I’ve taken a similar approach as my goal is to leave a better comic. That’s the whole point of Edinburgh.”

“I went into Edinburgh last year with 48 minutes of material and left with over an hour of material. Some comedians turn up with their full show but I was editing, adding to it and making it more fun. Then I got my nomination for Best Newcomer.”

Politics is still a theme in the comic’s work for both broadcast and stage, however he is keen to not draw on specific political events that can quickly date with audiences, such is the pace of the way the news is reported. “I remember talking about Charlottesville and Donald Trump on stage around the time of Edinburgh last year, and then the next week something else happened it it was hard to keep it fresh.”

“Now, I tend to pick issue based themes, asking why it keeps happening, as opposed to talking about political events or things Theresa May has attended, mainly because I need material that will last for six months.”

This year, Darren has a venue that is twice as big, which means bigger audiences. I asked him if Edinburgh audiences had been behaving themselves, following a tweet I’d spotted highlighting annoying behaviour taking place in one of Darren’s shows. “It’s a bigger room and twice the size as last year. The other day there was a couple and one of them kept going on their phone every now and again, plus some excited kids talking all the way through. A woman got up and left one minute before the end and managed to leave through the noisiest side of the door by the bar despite me telling her to use the right hand side of the door if she had to leave.”

Edinburgh can be a nerve-wracking time for performers, awaiting reviews news from agents during the run. I wondered how Darren copes with this. “I made a decision not read the reviews until September, when the festival finished, and that worked well for me last year.”

“All I get to see are the stars on my poster, or I’ll retweet the reviews and stars, but generally I’m pretty unaware of what’s happening and what the feedback is during the fringe itself.”

“As long as I feel good about what I’m saying on stage, I should really know myself what’s going wrong in my show, especially as now I have a director. If we can’t work out what’s going wrong, there’s a problem.”

Away from Edinburgh, the comic has lots of TV work lined up as well as numerous pilots in the works. “It’s all very hectic at the moment, working on lots of pilots,  and a new James Acaster and Josh Widdicome show called Hyperthetical. I’m also recording a Comedy Central roast with Stephen Bailey, airing in the autumn, as well as filming a CBBC programme, where I’m playing a teacher.”

The medium of TV places different demands and preparation on the performer, who takes to the screen with ease, “It’s just a different skill, and you get used to it. It relies a lot more on doing topical stuff, like Mock The Week, so you have to prepare the day before, which can get a little nerve-wracking, but you have to remind yourself that you deserve to do it.”

Darren Harriott definitely deserves a lot more in his comedy career, and there will be much more to come from this star. Make sure you catch Visceral at Pleasance Beneath (9:30pm) until 26 Aug. To book tickets, visit https://tickets.edfringe.com/whats-on/darren-harriott-visceral