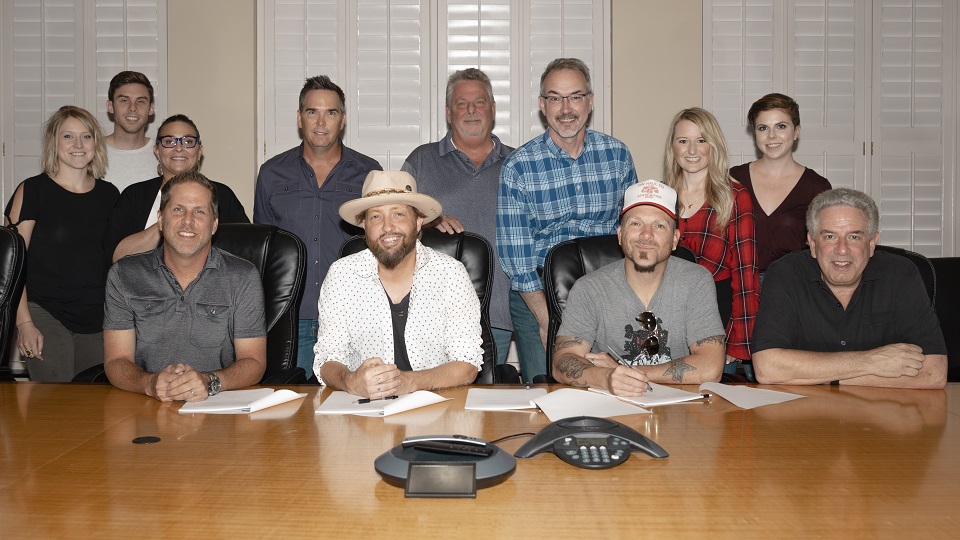 Band members Preston Brust and Chris Lucas joined BBR executives at their offices on Nashville’s famed Music Row for the signing. The group is signed to the Wheelhouse Records imprint, where they will join labelmates including Trace Adkins, Granger Smith, Runaway June and Walker McGuire.

“LOCASH has accomplished so much on their own, people in the industry have really embraced them,” said Jon Loba EVP, BBR Music Group. “Their entrepreneurial spirit mimics our own and we are so excited to work with them and look forward to watching them soar.”

“We’ve known Loba for years and had our sights on BBR since before we signed our first deal but knew we had to get the timing right, now it just feels like all of the stars have finally aligned and this is where we’re supposed to be,” said LOCASH’s Preston Brust. “It is a bit of a ‘pinch me’ moment, we’re such big fans of everybody on the roster and are honored to be named alongside such incredible artists.”

“They have put together an incredible team at BBR and with the full support of BMG behind them, there’s no better team to help take our career to the next level,” added bandmate Chris Lucas. “Talking with Zach Katz, who has made such an incredible impact on the music business and everybody on the BBR team, we could just immediately tell our music was going to be in the right hands and as a songwriter and artist, there is no better feeling.”

Known for their blend of country, rock, R’n’B and hip-hop influences, LOCASH formed in Nashville where Brust and Lucas moved to pursue musical careers. They released two albums and eight charting singles before their gold-certified breakout hit, I Love This Life, in 2015. The follow-up single, I Know Somebody, was also certified gold and topped the chart. Their most recent album, 2016’s The Fighters, was released in 2016 and reached the top 15. Additionally, the duo has penned hits for the likes of Tim McGraw and Keith Urban.

As well as performing on their own high-energy headline tour, LOCASH has opened for Tim McGraw and Faith Hill on their Soul 2 Soul Tour. They’ve also been nominated for a string of awards, including the ACM Award for New Vocal Duo or Group of the Year, CMT Music Award for Duo Video of the Year and CMA Award for Vocal Duo of the Year. LOCASH’s latest single is Don’t Get Better Than That, taken from their upcoming album which is due later this summer.

In 2017, BBR Music Group was acquired by BMG, the new model music company founded in 2008. BMG has 14 offices across 12 core music markets, representing over 2.5m songs and recordings as well as thousands of artists and songwriters.