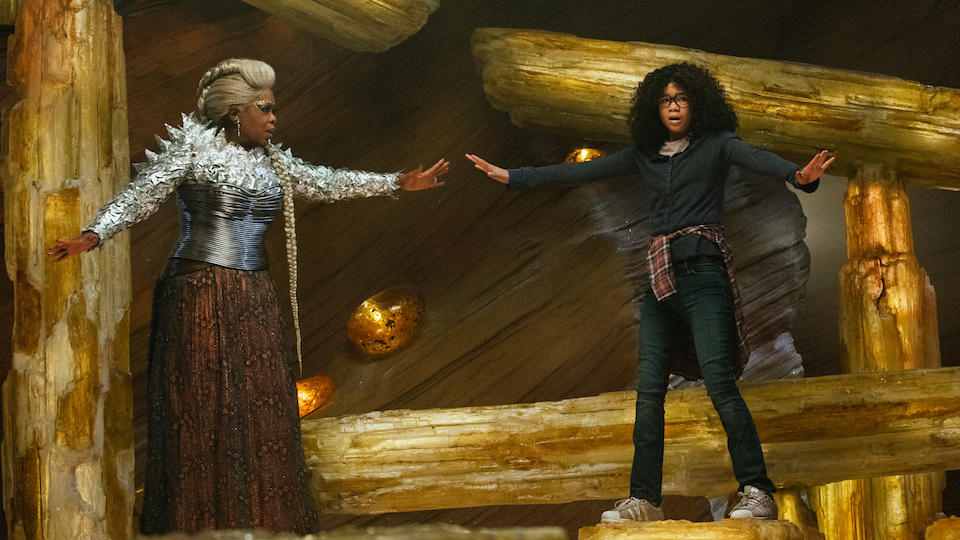 Based on Madeleine L’Engle’s 1962 novel, which isn’t particularly well known here in the UK, Ava DuVernay’s all-star adaptation of A Wrinkle in Time has been unfairly burdened with pressure since before it was released. Thanks to some high-profile comments from Academy Award winning actress Brie Larson regarding the validity of critique from the largely white, middle-aged, and male film writing community, it has continued since its release to be a film in the spotlight, but for all the wrong reasons.

From the word go, A Wrinkle in Time wasn’t just a film. It was an “important” film. The first African-American female director making a film with a budget over $100m, with a diverse, mostly female cast, and an unknown black teenage girl in the lead role. The prognosticators and think-piece writers were all over this. The film was being wrongly used as a litmus test for whether or not audiences wanted to see diverse stories on the big screen. It wasn’t allowed to exist on its own merit, and as a result, it was ultimately suffocated by its own cultural significance.

A colourful ode to outsiders and otherness, A Wrinkle in Time tells the story of Meg (Storm Reid) who has struggled to fit in at school ever since the mysterious disappearance of her scientist father (Chris Pine). He wanted to unlock the secrets of the universe using something called the tesseract, a kind of gateway to interstellar travel, but got lost in the process.

Then a strange visit from three astral travellers, Mrs Whatsit (Reese Witherspoon), Mrs Who (Mindy Kaling) and Mrs Which (Oprah Winfrey) sends Meg, her classmate Calvin (Levi Miller) and her weird genius little brother Charles Wallace (Deric McCabe) off on an adventure across the universe to rescue her father.

DuVernay throws absolutely everything at the screen, but with very mixed results. The film is extraordinarily colourful, and an absolute feast for the eyes, but it is also unavoidably ridiculous. If you can keep a straight face at the sight of a giant Oprah Winfrey in a curly blonde wig, then fair play to you.

During the course of their adventure, Meg and her pals discover that the universe is being infected by the IT – a darkness that is spreading into every corner of every world. It projects fear wherever it goes, which leads to rage and confusion, and eventually violence. This gives the film a timely relevance, but the noble message of fighting to bring back hope is handled somewhat mawkishly.

So here’s the thing: what Brie Larson said in her call for inclusivity in the film industry is absolutely true. We do need more critical voices that aren’t just 40-year-old white dudes. And I get that anything I say about this film, as an almost 40-year-old white dude, is pretty much irrelevant. Whilst I can certainly acknowledge the significance this film might hold for women of colour, or biracial teens, I will never experience that myself. All I can do is listen, and try to understand.

But whilst what Larson says about diverse voices is true, let’s be honest, the old “it wasn’t made for the critics it was made for the fans” is a crock of shit line only ever rolled out when something has taken an absolute beasting by the critics. Culturally significant or not, I’m sorry to say but this film deserved it.

A Wrinkle in Time is a wildly uneven film, and full of plot holes so big that if you take your eyes off the screen for more than a few seconds you’re likely to not have a clue what is going on. Yes it is visually imaginative, but to the extent that there’s no room left for any recognisable emotion. Sure there are happy moments and sad moments, but you can see the strings being pulled from a mile away. But don’t worry if you can’t see them, the incredibly on-the-nose soundtrack will tell you if you’re meant to be laughing or crying.

There’s no real sense of DuVernay herself in the film. No personal touch that reminds you that you’re watching a great artist at work. It instead feels like something brainstormed at an inclusivity away-day for Disney executives. Distinctly lacking in drama, structure, and focus, A Wrinkle in Time is so intent on being this grandstanding piece of progressive and universal art, it forgets to be a good film.