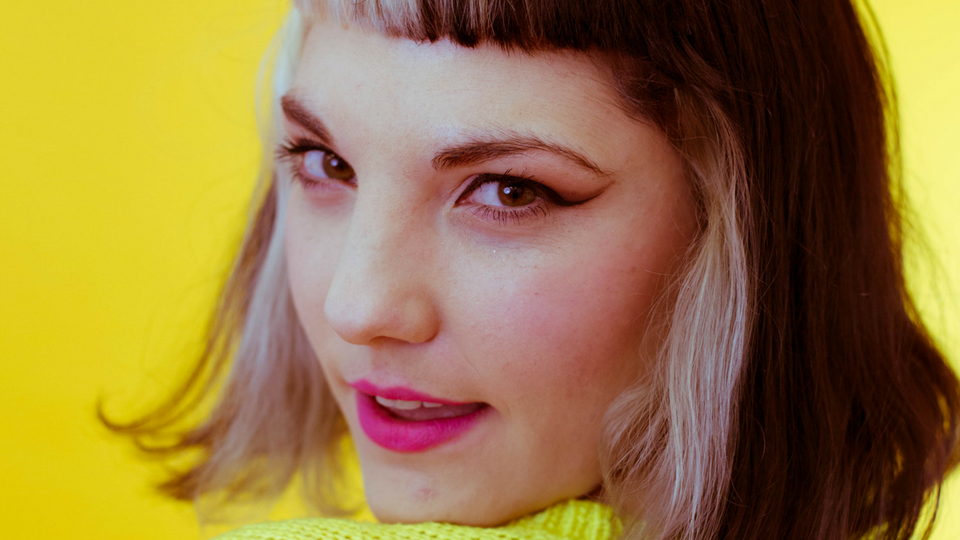 Scanning the Edinburgh Fringe line-up for something new and different led to me spotting Siân Docksey’s psychedelic poster on Twitter for her new show Interdependent Woman, which featured an eye-catching giant red lobster.

Siân has been to the Fringe before and was included in a round-up on the Telegraph in 2017 for ‘funniest one-liners’. Having curated her own DIY comedy nights in London, the Funny Women ‘one to watch’ comic promises ‘a fresh show about neoliberalism and being at sea from an avocado-carrying member of the millennial snowflake brigade. Plus lobsters.’

I was keen to find out more about her notions of political activism and feminism tackled through surrealist comedy, alongside the premise of a show devised to convince her worried mum that she’s a successful stand-up on a cruise ship.

Why a career in comedy?

I started stand-up at university when I did a gig mostly by accident, and now I think it’s the nuts. Alongside solo stuff I’ve spent the last few years doing sketch comedy with my writing partner Zoë Tomalin (who is a brilliant stand-up and comedy writer, follow her on Twitter @ZoeTomalin ) – what we love is making dark, Mighty-Booshey or League of Gentlemen type shows that are funny or just unsettling, your call. I’ve kept some of that vibe in my solo stuff because really what I like is making fun, weird shows that do a bit of storytelling, a bit of social commentary, but mostly just go big and nonsensical and entertain people. Apart from that, my career in comedy is a ruse through which I pursue my true passion, which is admin emails.

How important is it for you to be politically and socially active as well as being funny and what issues do you care about most?

Erm. It’s difficult because I’m not sure that comedy is activism in and of itself, truthfully. There’s usually political themes in my stand-up because it’s what I’m interested in talking about, and even the very personal is political, whether you like it or not. The problem with making it funny is: what I care about the most, politically, ends up getting into really dry structural issues about policy and economics when you properly get into it – I’m furious about what austerity under the Tory/Coalition governments did to welfare and the public sector in the UK, and I am always angry about feminist issues, particularly about the unpaid and undervalued work done mostly by women. Yeah I know, exactly – hilarious, right? Some of this ends up featuring in my shows but I want to do a stand-up show, not a campaign. If you care about political stuff, sign petitions, go canvassing for the party you support or donate money to people who are actually doing the work. I’m very flattered if people think my stuff is politically or socially active but I also reserve the right to mince about and make jokes about my foof.

How does the surreal help you address series/ridiculous topics through comedy?

It both massively helps and massively hinders. Last year I did a show about trying to turn myself into a lemon, because I wanted to talk about mental health under by capitalism: The idea behind the show was that I wanted to have the thick skin and resilience of a lemon, rather than the vulnerable brain of a human person. And what resulted was 45 minutes of me mostly talking about lemons. And gender and sexuality stuff, as well as a bit about being Armenian and having an immigrant mindset – but the point is, even though it was a much better show for it, the surrealism sort of departed from the original topic. Although I do still think that resulted in a much better show, despite everyone who sat in silence through me making a lemon porn scene every day who clearly disagreed.

Finally, what people, places or things are on your comedy manifesto at the moment?

Graham Linehan. He’s has been vocal online about men not taking up space from women, and is livid that some men will go so far as having expensive surgery, legally changing their gender, and repeatedly identifying as “a trans woman”, to steal some of the international glory of, for example, joining an all-women’s netball team. You go, Graham! It is often confusing for women to know whether they are actually women, particularly if they have only given it their own lifetimes-worth of considered thought. All confusion will disappear with Graham Linehan in charge of who is or can be attracted to women, and Father Ted will finally be recognised as a political drama about Ted’s relentless attempts to use Mrs Doyle’s bathroom.

Any ideas around how we’d move #MeToo along?

The #MeToo movement has been revolutionary in bringing up heart-wrenching stories of sexual harassment, such as “Why don’t women like things I spent literally nanoseconds thinking about to shout at them?” By getting #MeThree trending, we can better understand of these experiences as upsetting, everyday instances of men expecting women to fall in love with them for the bare minimum effort.

Well, why not save the UK baking industry AND stop Brexit AND dump Trump by introducing … Gender ‘Recognition’ Cakes? Why have only one Gender Reveal Cake to decide which set of crushing social expectations to stream your unborn child into? Make it compulsory to declare your gender, via cake, on every birthday – in fact, why not every day! How does this stop Brexit? I don’t know. I am dealing with that by dampening the anxiety with cake. And Trump? You know what scrap this idea I am single-handedly stress-eating enough cake to keep the entire British economy afloat.