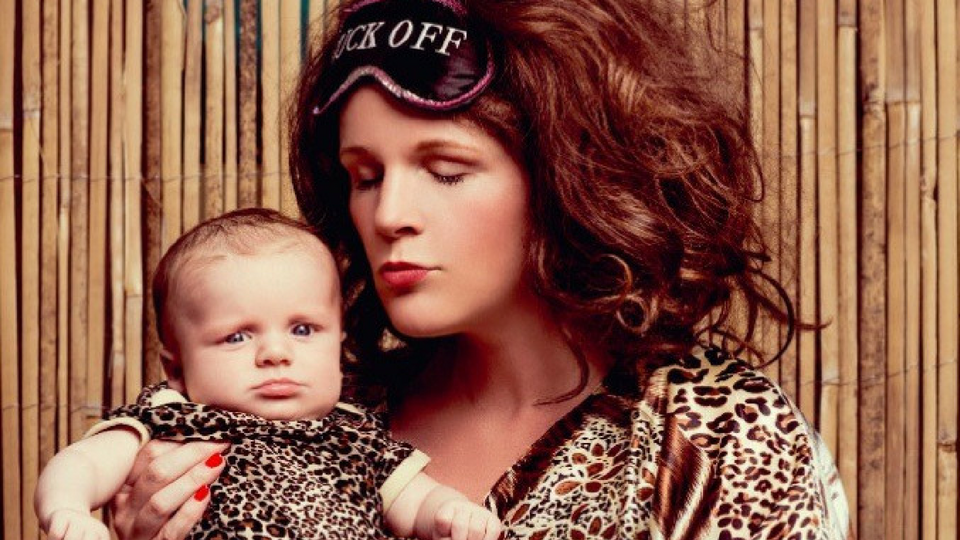 Beth Vyse is sailing into uncharted waters this year by bringing a real life baby onto the stage at this year’s Edinburgh Fringe as part of her character comedian show Olive Hands – The Hand That Rocks the Cradle.

Not just any baby mind you, she’s appearing with her own little boy, who is getting the taste of Edinburgh for the first time with an integral casting, to see what his hard-working mum gets up to for a living.

Beth’s character at the centre of her show, Olive Hands, the second most popular daytime TV presenter, is ‘your number two in the morning’ and is on a mission to become the best ever. I caught up with Beth to see how the character has evolved and how Beth tackles the hysteria surrounding motherhood by channelling into a surreal and jam-packed comedy show to hilarious effect.

What has Olive Hands been up to lately, leading up to this show?

She’s been working really hard, and has been on a cruise ship with Jane McDonald, and has also had a baby. She is determined to claim the best daytime TV presenter crown at any cost, and wants to prove that it can be done as a mother. So much so, she’s bringing her son along for the ride.

What can we expect from the show?

Things will go wrong. Obviously, using a real life baby is completely unpredictable, we don’t know what mood he’ll be in, if he’ll be happy or sad, but the end result will be big, bold, ridiculous and funny. Olive wants to prove she can make it with a successful career in daytime TV and even has a Handmaid man to assist.

How has your own experience of motherhood influenced the character this year?

I think the show looks at the known versus the unknown and what the ‘old you’ wanted before a new life comes along and how your priorities change. You start to laugh at what you used to be like beforehand. I think there’s definitely more of myself in the character of Olive this year. No-one prepares you for having a  baby, it is a shock to the system. You start thinking ‘how am I going to earn money for this new life?’ and you try to work it all out. Nappies make you feel sick when you first smell them but then you start to like it, then there’s all the beach body pressure, there’s a lot of hysteria around motherhood and questions that a new mum has and I try to address this in the show. The final section is about c-sections – I had one myself – and the psychological effects that come with it. All done through a daytime TV format. It’s very silly but is part of my own journey.

How has the venue (Monkey Barrel Comedy Club) accommodated you and a small baby?

They’ve been absolutely great, I picked the venue as I knew it would be a lovely one for us. They’ve given us the green room during the performance and we have a babysitter too. We have everything we need to ensure we’re well looked after.

Tell us about Olive Hands’s relationship with Jane McDonald and Paddy McGuinness?

She’s incredibly jealous of Jane, for all her success, which as we all know resulted in the recent BAFTA. She does draw on this and there’s even a warm-up act provided by Paddy McGuinness [played by Beth] who has a massive forehead and a foot for a penis, as he looks like he talks from his groin.

Who else will you guys be hoping to catch while you’re up at the festival?

Anyone who gets up on stage and makes me laugh and is naturally funny. I really like Daniel Cook, Nick Mohammed and Ali Bryce, Jayde Adams, Helen Duff and Lucy Pearman.