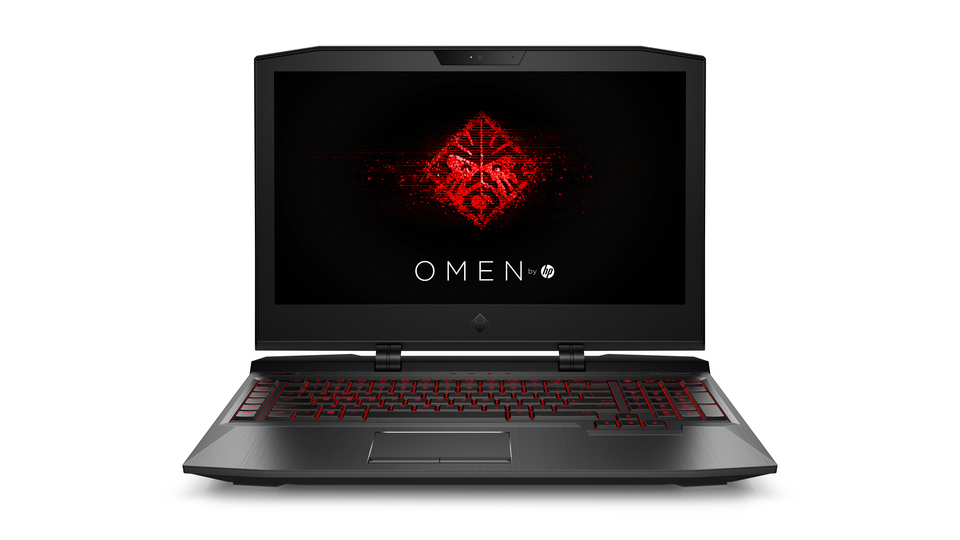 The Omen X is a high-end gaming laptop from HP that has it’s sights firmly set on replacing your current gaming desktop. Don’t be fooled by the mention of the word laptop though as the Omen X isn’t something you’re going to carry around often or even sit with on your lap. The size of the machine actually surprised me when I first took it out of the box because this thing is massive. The official dimensions come in at 42.5 x 32.72 x 3.64 cm and it weighs just shy of 5kg.

Turning the laptop on for the first time it’s hard not to be mesmerised by the built-in customisable lighting. The keyboard features individually RGB LED backlit keys and there are additional lights on the back of the screen. When turned on these lights burst into life and they look truly impressive. The laptop comes with a piece of software called the Omen Command Centre that can be used to configure the lighting and other aspects of the machine.

How you have the lighting is all down to personal preference and it’s possible to have everything the same colour or to define different areas and animations. The animations look good but I found they can be a little distracting during use if used on the fast settings. I much preferred the animations on the slower setting. A neat feature is being able to completely customise each and every key. For games it can be useful to define a profile to show the keys you need to use. So for example, an FPS game you might set the standard WASD keys to a particular colour so they stand out.

Watch the video below to see the Omen X laptop in action:

The HP Omen X is currently available in two different configurations in the UK. The model I reviewed was the 17-ap003na which costs around £2700 and is the higher of the two configurations:

As you can see from the specs above the Omen X is a very capable machine. In addition to these specs the machine is packing a 17.3 inch FHD (1920×1080) 120 Hz IPS WLED-backlit display with NVIDIA G-Sync. It’s a perfect size for gaming and looks stunning. The screen is attached by two substantial hinges that look like they will last for as long as you own the laptop.

One of my favourite features of the Omen X is the mechanical keyboard. The keys are shallow with just 2.5mm travel and they feel incredibly responsive. It’s an absolute joy to type on and just as good for gaming. There’s a full size keyboard on offer which includes a numpad. The left side of the keyboard even features a row of programmable macro buttons. The keyboard also features NKRO, also known as N-key rollover. This enables the keyboard to register as many keys as you can press without missing any. If you’ve played competitive games on a normal keyboard you’ve probably come across missed keystrokes and know how frustrating it can be.

One thing I wasn’t keen on with the Omen X is that the DC input is on the right side of the machine. When gaming with the machine connected to the power and using a wired mouse (as many gamers prefer) the power cable can be in the way. When unplugged this isn’t an issue but you’re only going to get around 3 hours out of the battery when gaming.

Booting the machine up is very quick and performance doing normal PC things in Windows and web browsing is excellent thanks to the SSD drive and impressive specs. If you’re into programming, 3D graphics or photo/video editing you’ll find the Omen X handles these tasks with ease.

There’s a dedicated button on the keyboard that brings up the Omen Command Centre software. As well as configuring the lighting on the laptop the Command Centre lets you tweak the performance. It’s possible to overclock the processor for some extra speed if you need it. Also there’s a network booster that lets you prioritise your gaming traffic to reduce latency. You can even force the Omen X to use the network card for gaming traffic while sending everything else over the Wi-Fi.

The machine truly shines when gaming and everything I’ve thrown at it just plays beautifully. All the latest titles run incredibly well and the Omen X can keep them all running at max frame rates on Ultra settings. The inclusion of NVIDIA G-Sync is very welcome and it ensures your games stay sharp, smooth and tear-free. It’s worth mentioning that you can connect a couple more monitors to the Omen X should you need multiple displays. Also the machine is VR-ready and easily powerful enough to run the latest VR headsets.

The Omen X features dual Bang & Olufsen speakers which do a decent job. During a gaming session the fans can get a little noisy but the speakers are loud enough to drown them out. However I much preferred using the machine with a decent set of headphones thanks to the included DTS Headphone:X tech. When playing online shooters it’s important to be aware of your surroundings and with headphones it’s easier to hear when other players are sneaking up on you from behind.

The HP Omen X gaming laptop is an absolute beast that can handle anything that you throw at it. If you have a need to play the latest games in multiple locations, and can afford the price, then the Omen X is going to suit you just fine. Any gamer should be blown away by the performance but those looking for a more portable machine might find the Omen X a little too big and heavy to carry around.