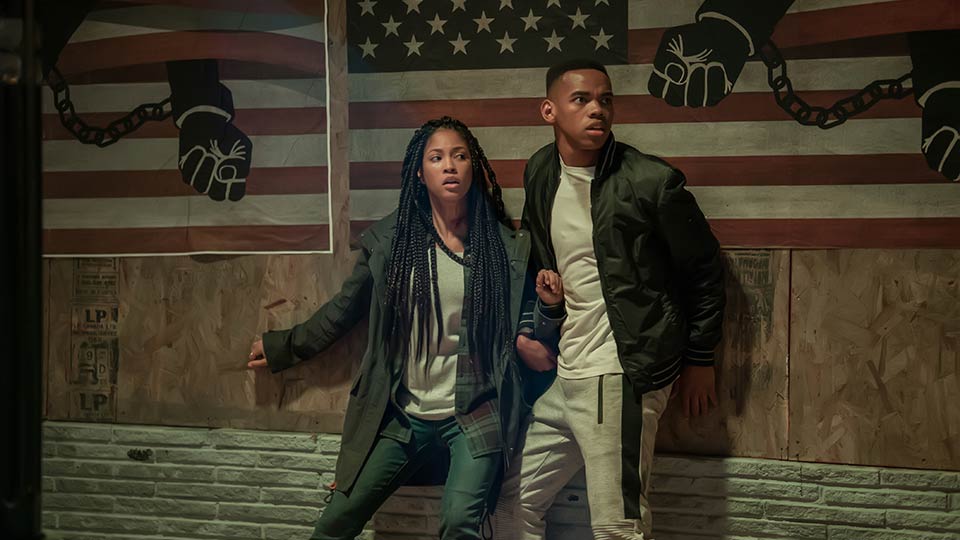 Making tons of money every time a Purge movie comes out, it comes as no surprise to see The First Purge be green-lit by Universal Studios. A prequel to the 2013 original starring Ethan Hawke, The First Purge looks at the first ever night of mayhem, the political situation surrounding its inception and focuses on how it affects a local community caught up in the crossfire.

Dubbed ‘The Experiment’ by the government, this prequel starts with news soundbites detailing how a new political party has emerged in the US to rival the Republicans and Democrats. Called The New Founding Fathers of America (NFFA), they quickly gain support and finance from (among others) the NRA and before long get elected into Office.

Once there, and with the help of Dr. Updale (Marisa Tomei – Spider-Man: Homecoming), the NFFA pick Staten Island for its test subject. Updale is the architect of a social experiment to see if a 12 hour, penalty-free purge can reduce the crime rate. Giving citizens a free pass to commit crimes and purge their systems of any built up rage and violence, the controversial scheme is voted in despite waves of opposition. Now with a matter of hours to go before ‘The Experiment’ begins, we get introduced to some of the locals facing a tough night ahead.

Drug kingpin Dmitri (Y’lan Noel) is concerned about Purge night and is looking to protect ‘his kin, his skin, his product and his money’. He is a familiar face to the locals of the community who know what he does for a living, but who also have a level of respect for him. He used to date Nya (Lex Scott Davis) who has now committed her life to helping the community, being an activist and protecting her younger brother Isaiah (Joivan Wade). He has started working the streets as a drug pusher, unbeknown to Dimitri who doesn’t want Nya and Isaiah caught-up in his world.

As the ominous klaxon sounds ushering in 12 hours of ‘the experiment’, the NFFA and Dr. Updale are monitoring the situation with drone and body cams, having incentivised the locals to stay on the island for $5000, with more monetary reward if they ‘participate’. One of those who needs no prompting to kill is crazy convict Skeletor (Rotimi Paul) – an unhinged psycho looking to have some fun. But as Dimitri and Nya soon see, the NFFA have a few ideas up their sleeve to make sure their agenda is pushed to the max.

The undoubted star of the film is Y’lan Noel who is simply sensational as local drug king Dimitri. The man has natural charisma and a screen presence that has been seriously lacking in Hollywood for years. I really want Wesley Snipes to return to the role of Blade, but if (for whatever reason) that doesn’t happen, Marvel need to sign up Y’lan Noel right now. He is a star on the rise and would be an incredible acquisition.

Lex Scott Davis is really good as Nya but it’s a shame that her strong female character slowly fades from the forefront as the film progresses. Patch Darragh plays a pantomime villain as Chief of Staff Arlo Sabian. There’s solid support from the likes of Joivan Wade, Steve Harris, Luna Lauren Velez, Siya, D.K. Bowser, Derek Basco and comic relief from Mugga too. And despite not being the actual Skeletor from He-Man and the Masters of the Universe, Rotimi Paul is certainly creepy as hell and frequently freaks you out onscreen.

I love Marisa Tomei, and she dutifully obliges in a cameo role that should have been fleshed out far more to utilise her talent. At one point she even utters the immortal buy silly line ‘what have I done?’ – as if the realisation that her idea of a purge night going awry is something of a genuine surprise that’s caught her unawares?!

Director Gerard McMurray (one of the producers of the excellent Fruitvale Station) handles things well enough, with writer James DeMonaco once again delivering the script, but stepping down from his previous duties of directing the last 3 Purge movies. The film has a few jump scares thrown into the mix which work well, and the contact lenses that participants use so that the NFFA can monitor them makes all of the bad guys look like crazy zombies with bright eyes – it’s a nice visual touch. But for every one of those moments there are opportunities that go begging for more exploration, like the white supremacists that are running around town. Or the great idea that a massive block party is happening at the start of the purge where no one is really killing anyone – kind of like a middle finger to the organisers of ‘The Experiment’. It would have been a great counter-point to have this idea explored further and how class and racial divides can’t force good people into becoming murderers.

Your enjoyment will stem largely from your expectations going into The First Purge. For sheer entertainment and suspense, it ticks all of the boxes and delivers a very entertaining ride. But The First Purge also had a great chance to deliver something more, especially given the current political and racial climate that we live in. If it tried a little bit harder, this could have been a great commentary on modern society. As it stand The First Purge is a very enjoyable thriller that does all of the basics just right. It’s such a shame that with this impressive cast, the script couldn’t cut a little closer to the bone and really make a bold statement.