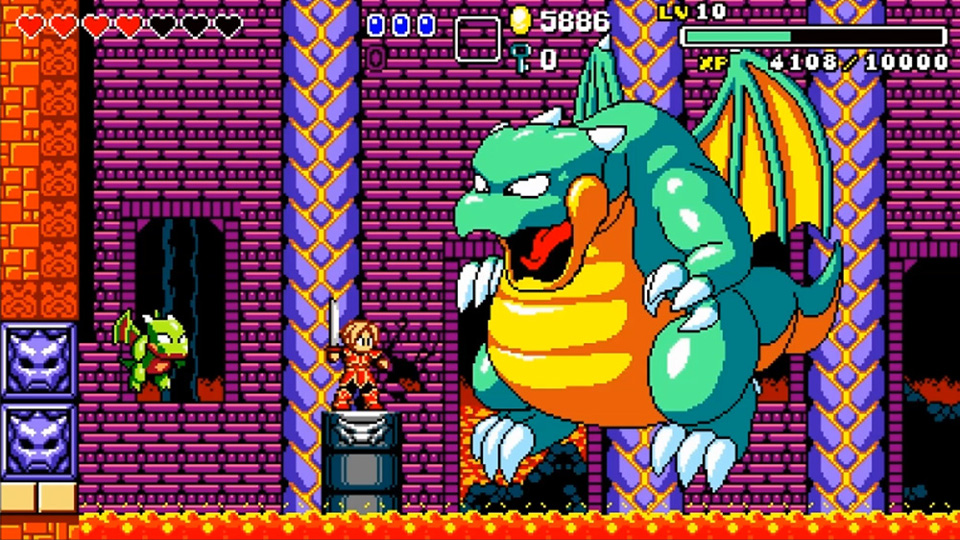 Developer Storybird Games, swoops in and drops an instant ‘classic’ into our laps in the form of Aggelos. A love letter to the 16-bit era, it skips nothing in the way of retro quality, and polishes it with a very modern touch.

Everything about Aggelos is nestled well within simplicity. From the menu to the controls, Storybird Games has found a way to take the ‘new’ retro formula and polish it to a sparkling finish. The controls are some of the tightest I’ve ever played, with the addition of modern day inertia added in. Aggelos feels retro, but pulls off the controls of a modern day title without a hitch.

The colours and palettes are a shining example of how to do pixel art right. The sprites are very simple, but so incredibly effective within their own animations. Nothing feels skipped out on when you watch your character run, jump and slash across the screen. The contrasting colours also make it so you never have to wonder about anything on the screen–everything is bold, standing apart from each other and often is just plain aesthetically pleasing to look at.

Watch the Aggelos launch trailer below:

The composition of the soundtrack is another gem to behold. Tunes that are so simple, yet catchy, will remain in your head long after you’ve walked away from the keyboard. It’s a loose one, but the only suggestion I can possibly make here is to have more variety, as some are recycled. In that though, nothing ever feels repetitive or annoying, and it’s great fun to hear the unique tracks given to the different planes and temples.

The temples themselves are absolute magic. They’re challenging, rewarding, and a great joy to work through. The best part about them is how doable they are–it’s no walk in the park by any means of the term, but by employing all of the techniques learned thus far in the game, making sure you’ve equipped the right armour for the job, and finally remaining on your toes as a player: this should get you through. The puzzles aren’t of rocket science caliber, but require just enough brain power to really feel good when solved. The bosses are also a thing of beauty–they’re huge, intimidating, colourful and really bite back. Mechanics in the boss fights that might be easy for some, but take a good few goes for others (I’m having flashbacks of the Water Temple and the eight tries it took as I write this). A lot of fighting in Aggelos takes a good bit of patience and some well-thought-out attacks. But on the flip side, there are many enemies that you run into in the world that you have to be quick and get the jump on. It’s not just a masher–Aggelos requires you to think.

It’s a lovely factor of Aggelos that you have to collect to pass. Meaning: leveling up, gaining hearts, exploring to get better items…it’s all in the name of progression. You can move freely about the world as you see fit, but unless you take the time to step into that temple, explore and beat it, chances are you’ll come across a road block in the world level that you can’t get past without a certain item, or just aren’t tough enough to weather. It’s cleverly done–and the best part is Storybird Games has used a great eye for detail in that you don’t get stuck. I mean this in two ways–there’s a wizard in the castle willing to give you little hints if you’re unsure of where to go (hot tip!), and if you’re on a board that you shouldn’t really be there yet (due to equipment limitation), then you’ll be able to find a way out without being stuck and having to restart the game manually in order to wiggle back out of it.

View some Aggelos screenshots in our gallery:

The only drawback of Aggelos that I can possibly point out, is the lack of a viable map. I say this lightly–as it would be very helpful to have, especially in exploring new areas and passages, but Aggelos isn’t complicated enough to not warrant a memorization of the frequent screens you see. Nothing is too labyrinthine to become overly frustrated over either. As you begin your quest, the feeling of intimidation is very much there as you take in all the different paths, but after roaming around the world enough, you find that not having a map really doesn’t hold you back. In the true fashion of the 16-bit era, Aggelos expects more of you as a player to sort out your journey on your own.

The great thing about modern day retro titles is the ability to make the game fair. All too often in our childhoods did we come across a game that was seemingly unbeatable, or just downright unbeatable. Looking back, there’s often a yearning to wear those rose-tinted glasses. Aggelos rights all these wrongs in the best way possible. Nothing of the retro feel is sacrificed. It plays, feels, looks and sounds like a true game of an era past gone.

Aggelos was reviewed using a digital code supplied by the publisher.