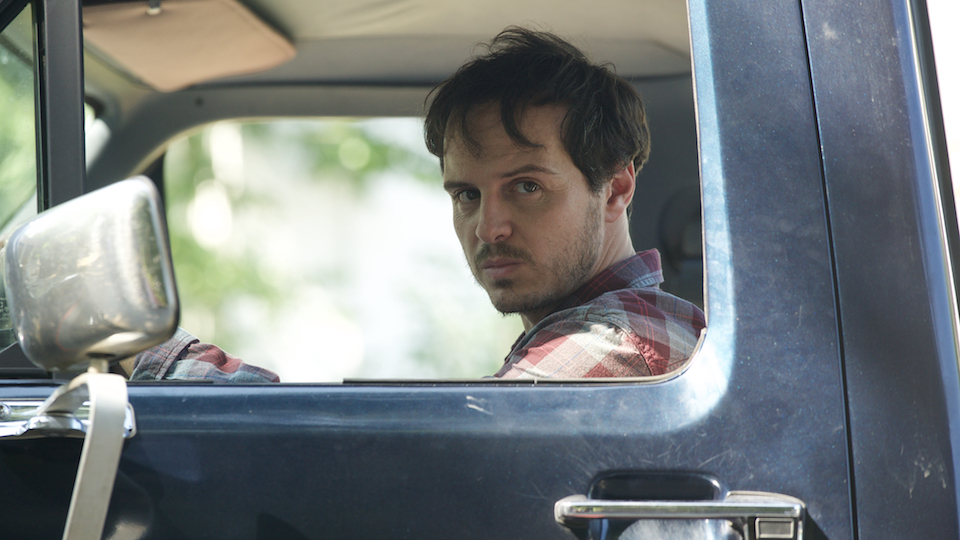 Steel Country, from director Simon Fellows is a dark and atmospheric thriller set in the decaying rust belt of America’s heartland. Beautifully shot and well acted, this is a very accomplished piece of filmmaking, but it is hampered by some whopping great leaps in logic. Your ability to overlook these will ultimately determine your enjoyment of the film.

Irish actor Andrew Scott (best known for playing Moriarty in Sherlock) plays Donny, a sanitation worker with learning difficulties. It is never explicitly stated, but the implication is that he is somewhere on the autism spectrum. When a local boy is found dead, Donny takes this personally as the boy always used to wave at him. The police deem it an accidental drowning. When Donny offers his condolences to the boy’s mother, a throwaway comment from her suggesting the boy would never go off by himself flicks a switch in Donny’s head and he becomes obsessed with finding out what really happened.

Driven by a desperate need to uncover the truth  – a need that the film never truly examines, we are left to assume it is because of his autism – Donny begins to investigate the crime. Socially awkward, a bit weird looking, and sniffing around the death of a small child. This doesn’t look good. Through Donny’s eyes this is a quest for justice. But through the eyes of everyone else, this strange behaviour could be taken in a very different way. It’s not long before Donny finds himself on the radar of the police. Alarm bells are ringing. Is this going to go the way we fear it will?

Whilst initially quite jarring to see Andrew Scott and fellow stalwart of British TV Bronagh Waugh playing working class Americans, they are both on fine form and very convincing. Scott in particular is given a real showcase for his talent, and in turn delivers an engaging central performance without ever becoming too showy or veering into stereotype. His best moments (as well as the film’s) see Donny spending time with his daughter and her mother during his court-approved visits.

Because of his job as a garbage collector, there are always flies buzzing around Donny. The director uses this symbolism to evoke the darkness and corruption in this small town. Something is rotten here. Sadly it’s the script. It’s a solid enough premise, but it wants to be too many things. A murder mystery, a small-town thriller, a social-realist drama. Each one buckles under the weight of the others and none of them end up paying off.

This slow burning thriller aims to say something profound about the state of modern America. The opening credits tell us straight away that we are in Trump country here. This is the disaffected America that got left behind by Bush and Obama. An America that lies, that strangles the truth, and where men abuse their power. Steel Country wants desperately to say something about all this, but trips over itself in the process. The plot is just too daft to give the social commentary any of the heft it requires.