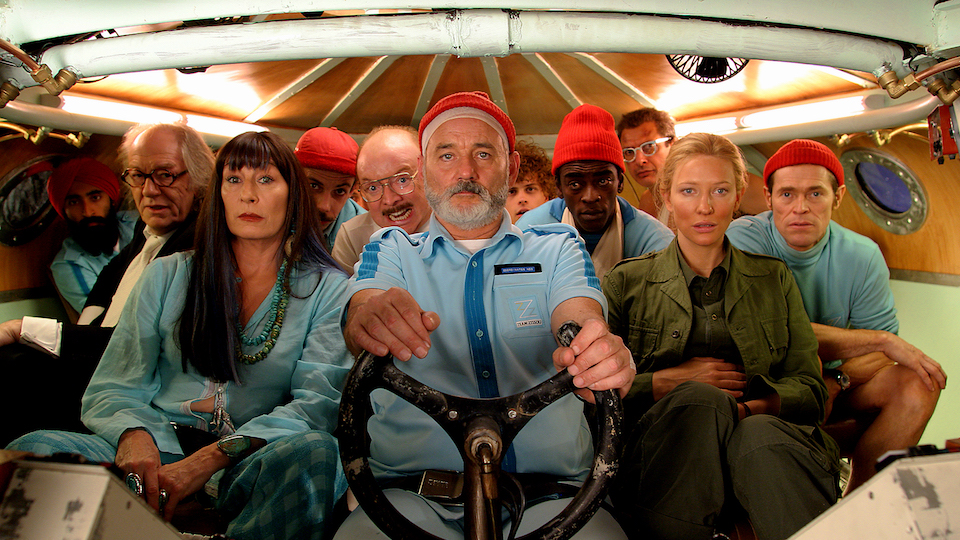 Following Bottle Rocket and The Royal Tenenbaums, the Criterion Collection continue with their excellent UK releases of Wes Anderson’s back catalogue with this deluxe edition of The Life Aquatic with Steve Zissou. Stunning picture and audio, and hours of special features make this a must own for fans of the eclectic director.

After three absolute critical smash hits, Anderson was very much the darling of the US indie scene when he unleashed The Life Aquatic on the world, a strange Jacques Cousteau adventure with allusions to Moby Dick. It would be unfair to say it was critically panned, but it was certainly met with a much more tepid response than his previous films. By far his most mannered, arch and arty film to date, The Life Aquatic follows the eponymous Steve Zissou (Bill Murray) as he sets out on an oceanic adventure to kill the fabled “jaguar shark” that ate his best friend.

As he sets sail into the deep on his mission of revenge, Zissou must deal with pirates, kidnappings, stop-motion aquatic critters, a safety expert (Seu Jorge) who sings excellent acoustic cover versions of David Bowie in Portuguese, and a rival oceanographer played by Jeff Goldblum. Also on board the Belafonte are Zissou’s estranged wife (Anjelica Huston), his first mate (Willem Dafoe), an airline pilot who suspects Steve is his father (Owen Wilson), a pregnant journalist (Cate Blanchett), and Zissou’s producer (Michael Gambon).

This was the first time Anderson truly unleashed the full force of his weird aesthetic on the world – and judging by how adored The Grand Budapest Hotel would become – it is clear we just weren’t ready for this yet. In the years since its release, it has become something of a cult favourite among the Wes Anderson faithful.

Played with such ironic, dead-pan affectation, it can feel at times like you’re watching a bunch of Ritalin addled kids playing make-believe. However, the great cast are very watchable, the music is great, and if you’re attuned to Anderson’s stylistic sensibilities then you’ll have a lot of fun with this film.

The disc comes jam-packed with supplementary goodies, first of which is a feature length commentary with Wes Anderson and co-writer Noah Baumbach. There is a 50-minute behind-the-scenes documentary called This is an Adventure, which was made by Antonio Ferrera, Matthew Prinzing, and master documentarian Albert Maysles. This is excellent, and features some pure Bill Murray gold.

Also included is an episode of Italian talk show Mondo Monda with Wes Anderson and Noah Baumbach. There are lots of deleted scenes, as well as vast selection of cast and crew interviews. Those of you interested in the music of the film are well served also, with an interview with composer Mark Mothersbaugh, and footage of Seu Jorge performing all his David Bowie covers. Lovely stuff!

You can tell this film meant a lot to Wes Anderson, as its realisation and production has been thoroughly documented. There is another behind-the-scenes film, but this one is more of a video journal, shot by the guy who played Intern #1. There are photos from the set, and various original artwork and designs. There is also a Starz on set making-of featurette.

Finally, the insert with the disc features a cutaway view of The Belafonte, some of Eric Anderson’s (Wes’s brother) original illustrations, and a conversation between Wes and Eric from 2005. Eric has also illustrated the artwork for each of the Criterion releases his brother’s films so far. Another excellent Wes Anderson release from this label.

John Parker
John is a freelance writer and film reviewer for Entertainment Focus.
Previous article
EIFF 2018: Who We Are Now review
Next article
Watch Tiffany Haddish get feisty in new Uncle Drew clip