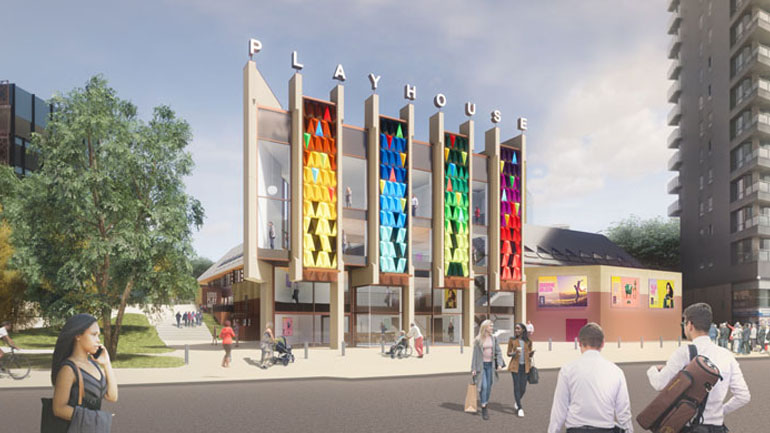 West Yorkshire Playhouse’s main building closes its doors for a major refurbishment this year, but the show goes on with a programme of exciting new work taking place across the region and in the Playhouse’s all-new pop-up theatre space.

With this change comes a major development reflecting the Playhouse’s commitment to the city – a new name and identity which harks back to the earliest beginnings of the Playhouse when it began life on the University of Leeds campus in 1968.

Now called Leeds Playhouse, the North’s premier producing house of new performance is marking a new chapter in the theatre’s 50-year history – embracing its role at the heart of cultural life in the Leeds City region and echoing the original name of the playhouse when it first opened.

James Brining, the Playhouse’s Artistic Director: “Changing our name to Leeds Playhouse is a progressive step forward for the organisation, reflecting and acknowledging our rich and fruitful history, the ambitions of the city of Leeds to place culture at the heart of the city’s life and the way that Leeds as a regional centre has become synonymous with the ambitions for this part of Yorkshire to work together for the greater good of its citizens.”

The renaming comes at a key time for the organization as it embarks on a transformative capital redevelopment project which will result in a striking new city-facing entrance; improved access around the building; enhanced financial and environmental stability and the opening of the Bramall Rock Void – a third performance space within the foundations of the theatre.

Funding has come in part from Arts Council England, Leeds City Council, the Playhouse’s own resources and funds and donations from trust and individuals including The Liz & Terry Bramall Foundation, Irwin Mitchell and SOYO / Moda.

“The redevelopment will transform the Playhouse to match the ambitions of our organisation to be a theatre for the 21st century,” explains Robin Hawkes, Executive Director. “Plans for the renewal of the Playhouse building are breathtaking, and the success of the fundraising campaign to date is testament to how integral those ambitions are to Leeds and Leeds City Region.”

From September the Playhouse will present its 2018-19 pop-up season which will take place in a temporary theatre on the existing site – with additional venues secured across the city and the wider region. The programme features a broad range of modern classics, contemporary revivals and all-new commissions.

Playhouse Associate Director Amy Leach: “We are incredibly excited about our forthcoming pop-up season. It’s a unique opportunity to present a brilliant, resonant array of plays to audiences in a variety of unusual locations including our own workshop; a backstage area of the theatre that is normally off-limits to the public. Our season is made up of a wide variety of stories that interrogate Britain from a contemporary, largely Northern perspective, as well as through the lens of the past.”