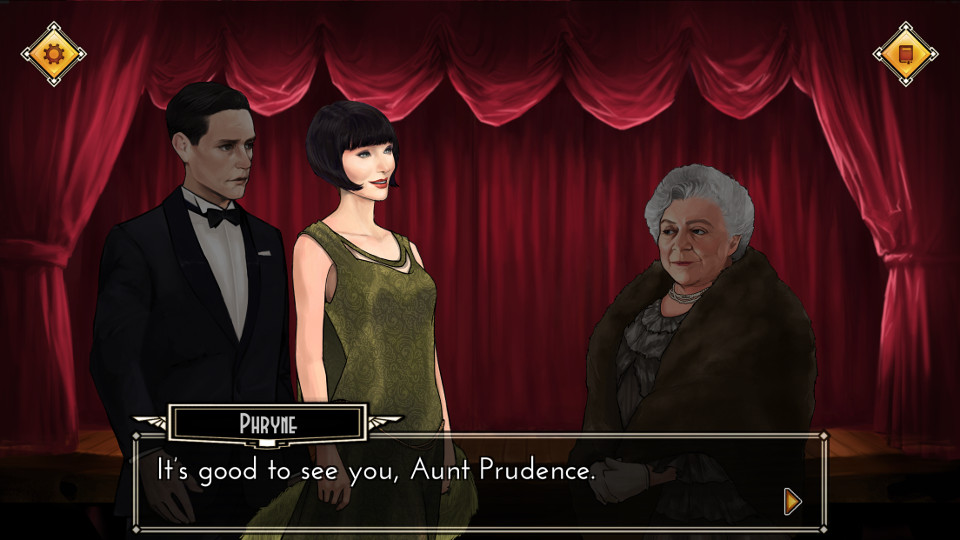 A smash hit on Australian television, Miss Fisher’s Murder Mysteries debuted in 2012, based on the popular Kerry Greenwood novels. It’s a clever period drama, taking you back to the roaring 1920’s and all the glamour that surrounded character detectives and sleuths of the time. Miss Phryne Fisher is no different from the luxurious tapestry woven in this era and proudly makes her way to her first game: Miss Fisher and the Deathly Maze by Tin Man Games.

Miss Fisher and the Deathly Maze itself is well done, fun and simple to play. The premise is in a ‘interactive gamebook’. You’re set to play through two of Miss Fisher’s murder mysteries in episodic form with two being released at the moment of this writing, clocking in at a steady pace of about an hour, hour and a half each. There’s no real game overs, the violence is modestly covered (which is impressive for a game revolving around murder!), and there’s moderate choices in branch text to be made. Sprinkled in for a bit of fun is the hunt for Miss Fisher’s lovely collectible outfits, which you are rewarded with to wear in game any time you please.

View the trailer for Miss Fisher and the Deathly Maze below:

There’s not too much to stray from the story itself. Aside from listening to everyone which is the main job, you can move from setting to setting as you wish, look for clues in anything from a fireplace to hiding in plain sight, and deduct said clues on a special screen where Phryne makes her own conclusions by comparing items and testimonies. It’s a great way to feel involved in the story, with just enough and never too much to become annoyed at the rate of which you have to employ these services.

It might be too simple for some, but if you’re a fan of Phryne Fisher herself and the series of novels or the TV show–this is going to be a surefire hit for you. Everything points to Phryne’s personality being perfectly captured in the the game–from her witty comments, coy flirting to her wonderfully nagging curiosity. Even if you’re not familiar with her previous appearances, you’d be hard pressed not to fall in love with her by the end of episode one. Not to mention that the surrounding characters have a good bit of charm to them as well. Everyone is clearly their own entity–no blanket writing for the character’s personalities, making them unique and all of their own. The dialog is refreshing as well–it’s short, sweet and right to the point without sacrificing the details that make up any one character’s sole vernacular. As a person that sometimes has trouble concentrating on long cutscenes, I found Miss Fisher and the Deathly Maze to be incredibly easy to pay attention to, as well as captivating enough to become attached to the settings, plot and cast themselves.

View some screenshots of Miss Fisher and the Deathly Maze in our gallery:

There’s also a fair bit of mystery involved for the player–the lightheartedness of the ordeal is fantastic at distracting you from laying down your own concrete conclusions as to who committed the crime. The writing isn’t complicated, but is effective enough to keep the murderer in the dark until the very end. This is something to appreciate across the board–when you play Miss Fisher and the Deathly Maze, you’re always going to have suspicions running through your mind as to who ‘done it’, but the game throws enough curve balls to keep the trail moderately cold. Keeping the audience constantly wondering is key to a well written murder mystery, as there’s nothing fun about knowing how the plot resolves right from the beginning. This does affect the amount of replay you might get from this title though, and Tin Man Games combats this by putting in plenty of achievements (some for collectible outfits, some for reaching certain dialog points) for you to go back through the episodes and hunt for.

As the game itself is very simple, there can be a few hangups with it as a whole, along with squishable bugs in the programming of paths and menus. For some, I suspect Miss Fisher and the Deathly Maze will come off as too linear and not complicated enough to be considered ‘proper’ gameplay. Indeed it plays more like a novel you’re interacting with rather than your average adventure title. For most, there’s no illusions in this respect; as Miss Fisher and the Deathly Maze is based originally on it’s own novel, the format of the game seems to be the perfect fitting to tell the story in the way Miss Fisher fans would like. If you enjoy a bit of murder mystery, a lovely, strong woman in the lead and are ready to go on an hour long journey to a lavish time–Miss Fisher and the Deathly Maze is certainly a title for you. Having never had heard of Miss Fisher herself before this review, I can certainly say I’m charmed into being a fan of the character and hope dearly for an episode three to be released in the future!

Miss Fisher and the Deathly Maze was reviewed using a digital code supplied by the publisher.