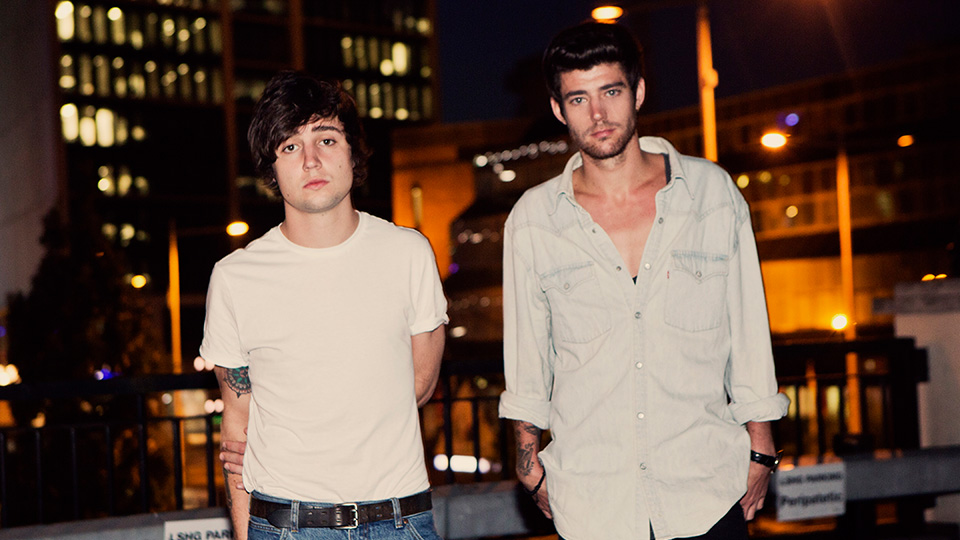 Into the Ark came to the attention of the public after appearing on The Voice UK in 2017, where they were mentored by Sir Tom Jones.

The duo – Taylor Jones and Dane Lloyd – won fans over with their combination of folk and soul and went on to complete a sold-out UK tour after coming second in the competition. Since then they’ve been working on new material and they’ll be releasing new E.P. Valencia on 22nd June 2018.

I caught up with Dane recently as the duo were in the midst of supporting Sir Tom on his US tour to talk about Valencia, find out what plans the duo have for their music and to discuss the challenges of coming off a reality TV show.

You’re calling me from Texas today. How has the US been treating you?

So far, so good. Every show has gone really well. Fans are coming up to us afterwards and speaking to us so we’re doing alright.

It’s a pretty extensive tour that you’re doing at the moment with Sir Tom Jones. What kind of preparation have you had to do to make sure you can get through such a lengthy tour?

I think the main thing was that we were meant to be doing this in September last year and then Tom had to have an operation so it got postponed until now. That’s given us a lot more time to prepare because we were trying to think what we would have actually done if we did come out in September. It was kind of a blessing in disguise that it was a bit later. We signed a deal in February and we’re funded by our label so we don’t have too much to worry about.

In July you’re going to be back over in the UK for some shows. What can people expect from those?

If they haven’t seen us before, we’re a singer-songwriter duo. It’s based on a lot of harmonies and the lyrics to our songs are quite deep, if I’m honest. If they like that kind of thing, come and watch!

You’re releasing new EP Valencia in June. Tell me the story behind that and how it came about…

We’ve been going in and out of different studios before doing The Voice UK, doing our own music and we couldn’t really find a sound with anyone. They kept trying to make us very manufactured with lots of effects and tuning the vocals. Me and Taylor just wanted to come off The Voice and just show people what we actually love doing, which is the harmony thing like Simon & Garfunkel, The Beatles and The Beach Boys, all of our favourite bands and influences. We went to Valencia to work with these two guys because everything they do is pretty raw. There were no gimmicks, no effects or or anything. We most things in one take and live so you can hear any mess ups or any scuffs of the guitar. It was quite an organic thing so we’ve done that for this E.P. The thing we’re proud of most of all is that we didn’t just do an E.P. full pop songs. I like to believe that it’s quite mature and I guess our biggest influence for the E.P. would be Ray LaMontagne. It’s similar vibes to that but as a duo. .

Having been on The Voice, was there that pressure for you to just go out and record a ready-made pop album just get something out there immediately?

Yeah. That’s normally way it does go and try to get the Christmas single (laughs). We didn’t want to do that, we wanted to take a good couple of weeks, and take it all in as well, and write about it. Some of it was hard to handle in terms of the instant fame type of thing and how people are when you come back. You obviously feel no different when you’ve only been away for seven months but to them, they’ve been watching you on TV. Even the closest people an act a bit strange. That was a good thing about going to Valencia so we could write about it and take in all the process. We’ve kept to what we normally do, folk and soul music.

It can be really hard to be taken seriously after you’ve been on a reality TV show. I feel like you guys have been earning your stripes by touring so much. What hurdles have you faced in terms of being able to make the music you want to make?

To be fair, the fans we gained from The Voice have all been amazing. We did one song that was a bit poppy but still wasn’t pop like what’s in the charts. It had a lot more going on in terms of production. They prefer the stuff we do that’s more like Ray LaMontagne and The Beatles so I think we’ve good some good fans fortunately.

Sir Tom’s been on your side since he mentored you on The Voice. What kind of mentor has he been for you throughout this entire experience so far?

He’s been amazing. That’s one of the reasons that it’s been going so well for us if I’m honest. We did our own UK tour straight after The Voice and that was sold out. To go from that to playing shows with Tom just made it feel like a step up for us in terms of stages and the amount of people we’re playing to. He’s taken us to America now. Just being around him, you learn so much obviously because he is like an idol to us, that’s how everyone sees him in Wales. I listened to his music when I was younger and now I’m getting to perform on stage with him. With the E.P., one thing he told us was not to come off the show and be someone else that you think people want you to be. He said the reason people liked what we do is because they haven’t seen a duo just playing guitar and singing on the show. Normally there’s lots of dancers in the background and strobes and all this, and he said that’s the reason we got so far. That’s what we’ve kept doing and so far it’s worked out.

What’s the plan for music after the E.P.? Are you working on an album or are you going to see what reaction you get to Valencia and take it from there?

We’ve started making the album. We’re doing it with Mike Needle and Dan Bryer. They work with Rag N Bone Man and Niall Horan. Rag N Bone Man does soul music but it’s very current, that’s what we wanted for the album. We got to do our acoustic mopey sad stuff but we do have big songs that need production, but it’s the right type of production, so we felt like these were the right guys for it. I think there’ll be a couple of singles in October, then the album will be released in early 2019. We’ve got some good plans for that in terms of tours, music videos and radio. Fingers crossed that people like the E.P. and that they love the album even more.

You’ve got a busy few months coming up. Are you going to be able to fit anything else in before the end of the year?

We’re always writing music whether it’s for us or for fun. Ever since working with these guys, we want to do some writing on the side and maybe pitch it to some artists. That’s just if we get time, if not we’ll just keep focusing on us.

Into the Ark release their new E.P. Valencia on 22nd June 2018. You can see them performing at the following dates:

Advertisement. Scroll to continue reading.
In this article:Into The Ark, Sir Tom Jones, The Voice UK