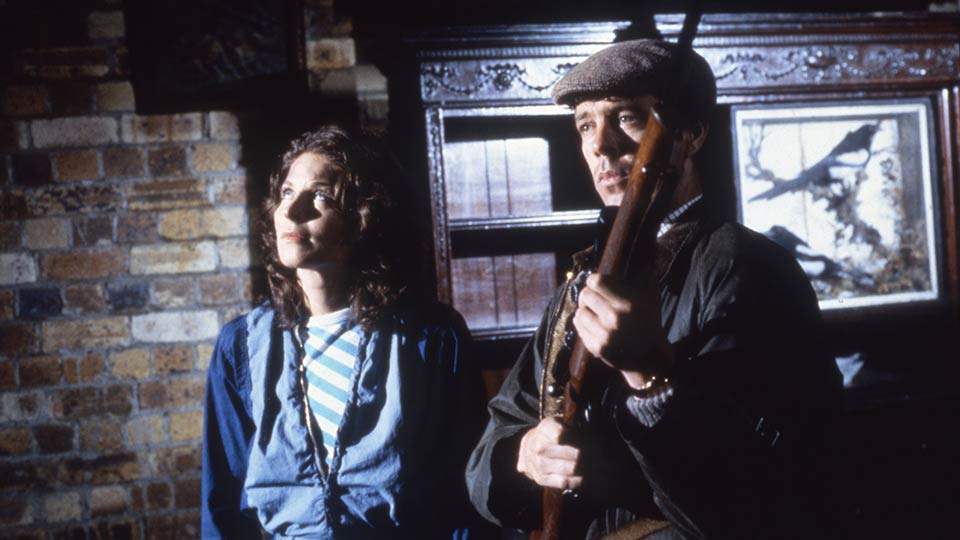 The Mad Death is a three-part BBC television drama serial from 1983 which deals with an outbreak of rabies in the UK.

When a young French woman can’t bear to leave her Siamese cat when she goes on a trip to England, she illegally smuggles the pet abroad. Only the cat is infected with rabies, and when it’s bitten by a local fox, the disease spreads… But of course at the height of the disease, infected animals become aggressive. So when Tom Siegler (Ed Bishop) takes a docile-acting fox home, it isn’t long before the animal goes on the rampage and bites him. To complicate matters, Siegler is having an affair, but also kisses his wife and hand-feed his menagerie of pet dogs…

Will the deadly disease spread amongst the human population or just trouble pets and wild foxes? When Siegler’s condition is diagnosed, the government is brought in to identify the source of the outbreak, quarantine pets and to destroy all infected animals in the area to get the disease under control and prevent public panic.

The Mad Death gets off to a terrific start. The opening episode is full of drama and suspense, and is full of beautifully-teased red herrings, where viewers spot the potential for the infection to spread. Ed Bishop, best-remembered for playing the lead in Gerry Anderson’s UFO, gives an incredible performance as somebody who goes from fit and healthy to suffering from hydrophobia, vividly displaying the madness associated with rabies.

The problem is, having built up such a great premise, the final two episodes offer diminishing returns. Almost as a way of stretching the drama over three episodes (it could easily have been resolved in half the time) affairs and improbable love triangles are thrown in that are boring and nonsensical. There are also repeated scenes of dogs being shot at which, especially in a canine-loving nation like the UK, isn’t terribly appealing over a sustained period. If we cared more about the lead characters and the mortal danger they are in, the urgency of the violent cull would perhaps work on an emotional level. As it is, the characters seem lifted from something like the 1980s yachting soap opera Howard’s Way and dropped into a rabies crisis, so the approach is alienating.

Added to the problems of the script are some very uneven performances, as sadly the rest of the lead cast don’t match up to Ed Bishop’s masterclass in fear and sickness. Barbara Kellerman was an extraordinary beauty and was regularly employed in high-profile leading roles throughout this period. In The Mad Death, she gives her usual stilted, rather bland performance as a doctor involved in identifying the disease. She’s paired off with the equally insipid Richard Heffer, who heads the government investigation. The late Richard Morant is slightly more compelling as Kellerman’s caddish beau, but he can’t do much with a one-note moustache-twiddling character. Other than Ed Bishop, the only actor to keep the viewer’s interest is Brenda Bruce, who plays an eccentric old cat lady who prefers animals to people, and can’t quite understand why her pets have to be quarantined. Bruce attracts both sympathy and fear from the audience, and she steals every scene she’s in.

As compelling drama goes, The Mad Death does very well in depicting rabies and its effects. There are some truly suspenseful moments, such as when an infected Alsatian stalks a family in a shopping centre car park, and the animals leaping at glass windows with foaming mouthes is brilliantly realised. As a public safety film warning about the symptoms and dangers of rabies, The Mad Death is a palpable hit. Where it falls down is in its weak characterisations and over-long script that is riddled with tedious romantic embroilment and some ludicrous motivations, realised via an abundance of forced dialogue.

The overwhelming feeling with The Mad Death is it would have been much stronger to have limited it to the opening episode, or had the first episode dealing with the outbreak, and the second episode resolving it. Instead, the mangled and uninteresting “human drama” bogs down the actual issue at stake, weakening it. Frustratingly, The Mad Death could have been a lot better.