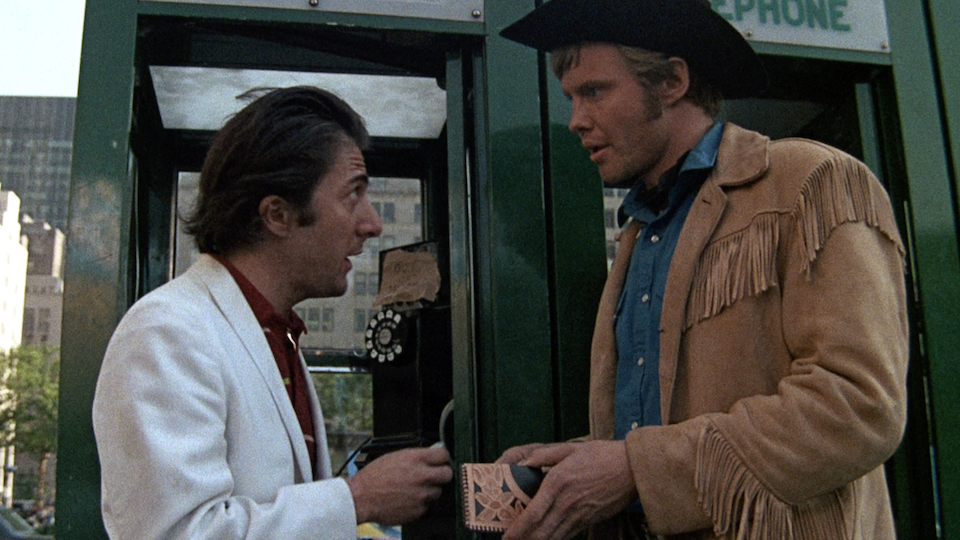 John Schlesinger’s groundbreaking and Oscar winning film Midnight Cowboy arrives on blu-ray this week, and is granted a spectacular release courtesy of the fine folk at Criterion. Beautifully restored and jam-packed with special features, this landmark in American cinema is well worth your money.

One of the quintessential New York movies, Midnight Cowboy tells the story of Joe Buck (Jon Voight), a wide-eyed hick from Texas trying to make it as a hustler in the most street-wise city in the world. He dreams of making a fortune by seducing the bored, rich women of Park Avenue, but ends up living in squalor with a tramp grifter called Ratso (Dustin Hoffman).

Famously (or infamously) the film was the first and only X-rated film to win Best Picture at the Oscars. In the post studio system Hollywood, the success of Midnight Cowboy was one of the most influential moments in the American New Wave. A mainstream film about prostitution, homosexuality, drugs, sexual abuse, and poverty, winning the acclaim of the Academy was (and still is) a very big deal. Especially considering how conservative they would become over the next few decades.

Rewatching the film for this release (for the first time in many years) I was shocked at how tonally jarring it is. On paper, a film about the skid row friendship between a male prostitute and a homeless conman should result in a serious piece of social realism. And perhaps it should have done. But the film bounces to a jaunty rhythm, and is at times almost comedic. Schlesinger and his editor Hugh A Robertson, employ all the tricks that were fashionable in 60s cinema, such as trippy montages and pop songs on the soundtrack, to keep this exploration of New York’s seedy underbelly watchable.

But nothing done behind the camera can match the genius that is happening on the screen. One of the greatest screen pairings of all time, the performances of Voight and Hoffman are nothing short of sensational. The relationship of Joe and Ratso, from mistrust and opportunism to heart wrenching co-dependence, is why the film has endured. They should have both won Best Actor.

This release comes packed with extras, including an audio commentary recorded with director John Schlesinger in 1991. There are two new programmes about the film, one with noted photographer Michael Childers, and the other with cinematographer Adam Holender. Also included is the terrific The Crowd around the Cowboy, a short documentary from 1969 filmed on location featuring rare behind the scenes footage of the cast and crew.

There are two further documentaries from the 35th anniversary release of the film back in 2004. These are After Midnight and Controversy and Acclaim, both featuring interviews with Hoffman, Voight, Sylvia Miles, and Jennifer Salt.

Additionally there is an interview with John Schlesinger conducted by BAFTA in 2000, as well a tribute from BAFTA LA in 2002. Another dip into archives has uncovered an appearance from Jon Voight on the David Frost Show in 1970. If that wasn’t enough for you, there is also some brilliant improvised footage of Voight’s screen test, conducted by screenwriter Waldo Salt.

To round things off, there is the Academy Award nominated documentary Waldo Salt: A Screenwriter’s Journey, about the life and career of the writer who adapted Midnight Cowboy from the source novel. There is also the original theatrical trailer, and an essay from critic Mark Harris.

This is a terrific release of a film – which despite having dated over the years – remains an important and influential cultural landmark in American cinema. Everybody should still be talking about Midnight Cowboy.