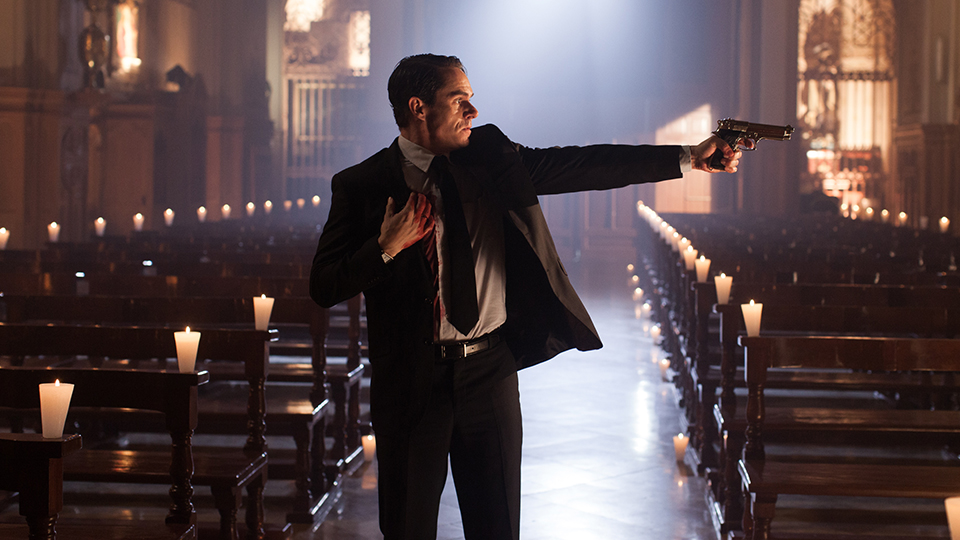 The man of the eponymous title in this Mexican thriller is a funeral director with a difference. He’s also runs a hitman for hire service. An interesting career path. But Mr Avila is a tortured soul, having lost his son (suicide – or possibly murder) and having to witness his wife incarcerated in a mental hospital (all of which would have been explained in series one).

The second series opens with a bizarre shoot out in the funeral parlour as four corpses rise up from out of their hearses and start shooting with machine guns at the parlour employees. It’s a bloody and violent opening that sets the pace for the remainder of the opening episode. There’s lots of soul-searching and furrowed brows from Mr A (played by the decidedly non-Mexican sounding Tony Dalton – a Texas-born American who found success in Mexican soap-operas) – so much so that his assistant, Ivan, starts to doubt his boss’ ability to do the job in hand. The Ivan character is an interesting one, actually; he’s like an attentive man-servant, constantly there to guide Avila on the path of good hitman-ship when his conscious starts to get the better of him.

Elsewhere we meet Detective Sanchez (Juan Carlos Remolina) and his partner, Erika Duarte (played by Ilse Salas). Sanchez has just returned to the department after an extended period of leave. But when he hears that he’s got a new female rookie partner, there’s the predictable bravado and sexism. And sure enough, she turns out to be a by-the-rules cop (with nerdy glasses and her hair tucked up in a bun – just to complete the cliché) completely at odds to his maverick approach. It’s an obvious and, frankly, tiresome approach, and somewhat out of step with the rest of the show, which is anything but obvious.

Back with Mr Avila, he’s mostly seen driving around in his Mercedes struggling with his conscious. Whilst driving, he’s frequently stopped at traffic lights, where street jugglers in clown masks perform a fire breathing act to waiting traffic. You can see what I mean about it being anything but obvious.

The first series of Sr. Ávila (to give it its Spanish title) was a huge success, winning ATVC and Telly Awards, as well as an Emmy for best non-English US primetime programme. And the production values are clearly very high. Having not seen the first series, I can’t comment – but the opening gambit of the second one didn’t grab me as much as I’d hoped. It was at times both confusing (am I watching a dream sequence or not?) and slow to get going.

Comparisons to the The Sopranos and Six Feet Under are obvious, but the script – certainly from the one episode I saw – fell a little short of those heights. It might be worth sticking with, as there’s plenty of potential there. Seeing it from the first season would be preferable, of course; but coming in cold to season two has me a little bewildered.

Mr Avila series 2 will be available to stream for free from 4th May 2018.

In this article:Mr Avila, Walter Presents