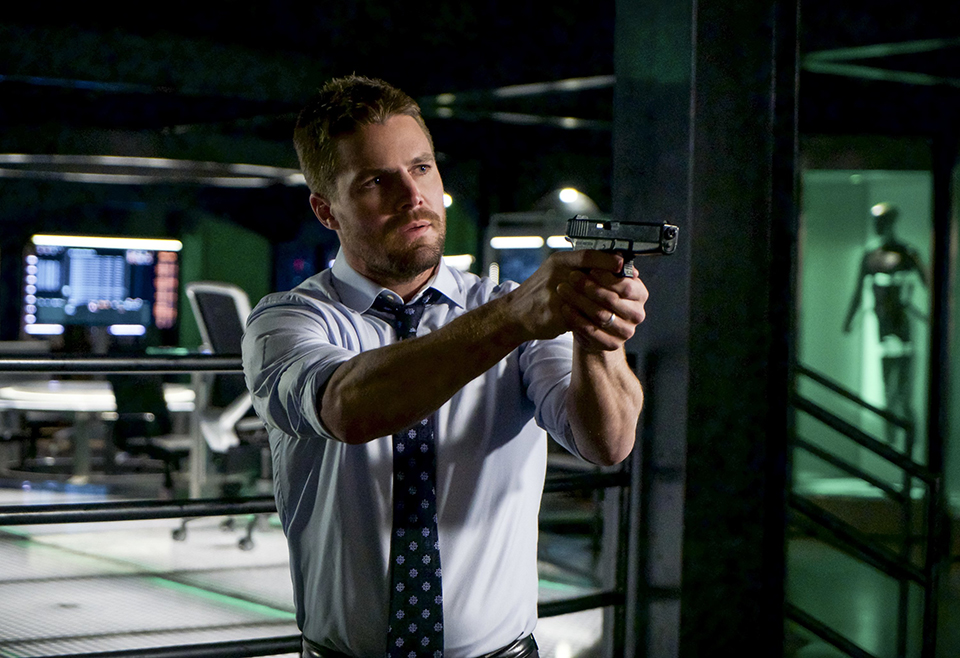 Oliver (Stephen Amell) and Diggle (David Ramsey) came to blows on the latest episode of Arrow.

After much prompting by Felicity (Emily Bett Rickards), Oliver apologised to Diggle for not giving the green hood back to him as he’d promised. Initially Diggle seemed to accept the apology but secretly he was seething about it.

Following a confrontation during a mission, Diggle questioned Olivier’s leadership skills leading to Oliver attacking Diggle’s character. The two friends engaged in a fist fight that was stopped by Felicity.

Lila (Audrey Marie Anderson) told Diggle he should consider teaming up with her at A.R.G.U.S. and he decided to quit Team Arrow.

Meanwhile Dinah (Juliana Harkavy) arrested Anatoly (David Nykl) but was forced to release him by Captain Hill (Tina Huang) and DA Sam Armand (Pej Vahdat). Oliver fired them both after learning that they worked for Diaz (Kirk Acevedo) and they retaliated by claiming on TV that Oliver had obstructed justice and calling for his impeachment and firing all of their clean cops, including Dinah.

Elsewhere Curtis (Echo Kellum) was exposed as a vigilante to his new boyfriend and Laurel (Katie Cassidy) continued to play Quentin (Paul Blackthorne) as she cosied up to Diaz.

The next episode of the season is Fundamentals. Convinced he’s failed as a father, a mayor and a hero, Oliver is in a dark place. That’s until a ghostly visitor shows up with a wake-up call.

Tune in to Sky 1 HD at 8pm tonight to see the episode. Preview it with our gallery below: