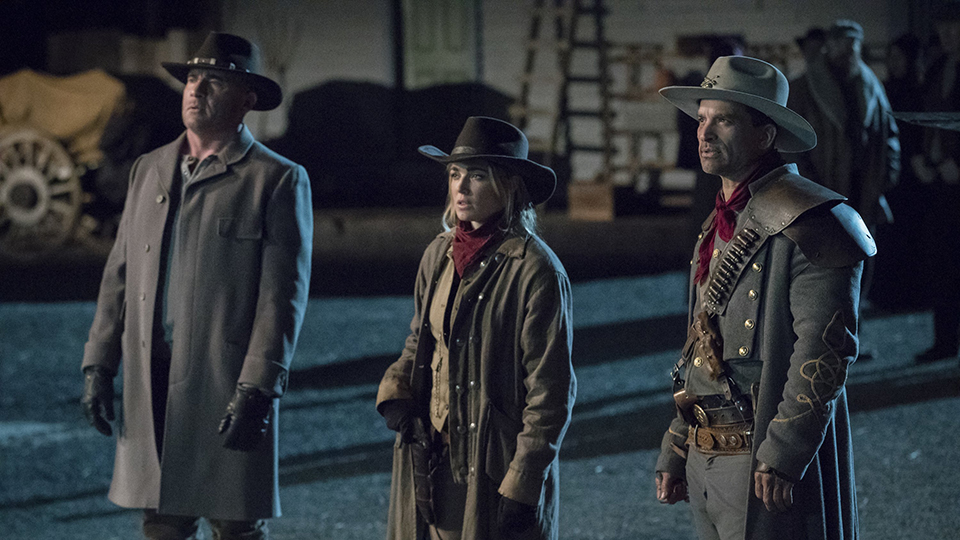 The Legends worked on delaying Mallus’ release on the penultimate episode of DC’s Legends of Tomorrow’s third season.

First they stopped Gorilla Grodd from killing a young Barack Obama (Lovell Adams-Gray) and then they reluctantly teamed up with Damien Darhk (Neal McDonough) who asked them to help save Nora (Courtney Ford). Darhk realised that once Mallus was released, Nora would be killed.

Ray (Brandon Routh) tracked down actor John Noble and asked him to impersonate the voice of Mallus so they could trick Nora onto the Waverider. That worked but Sara (Caity Lotz) ultimately decided to let Mallus out to help Amaya (Maisie Richardson-Sellers) to secure the future of her family.

She gave the Death Totem to Darhk and he tried to keep Mallus from being freed by releasing Grodd on Zambesi to stop Amaya causing the final anachronism. Nate (Nick Zano) stopped Grodd with the Earth Totem and Mallus broke free from his prison, revealing himself to the Legends.

Elsewhere Rip (Arthur Darvill) told Ava (Jes Macallan) she was the 12th clone he’d recruited and Sara told Ava that she wanted to be with her.

The next episode of the season is The Good, The Bad and The Cuddly. Things start to get messy when the Legends’ grand plan to take down Mallus goes down the pan.

Tune in to Sky 1 HD at 8pm on Wednesday to see the season finale. Preview it with our gallery below: