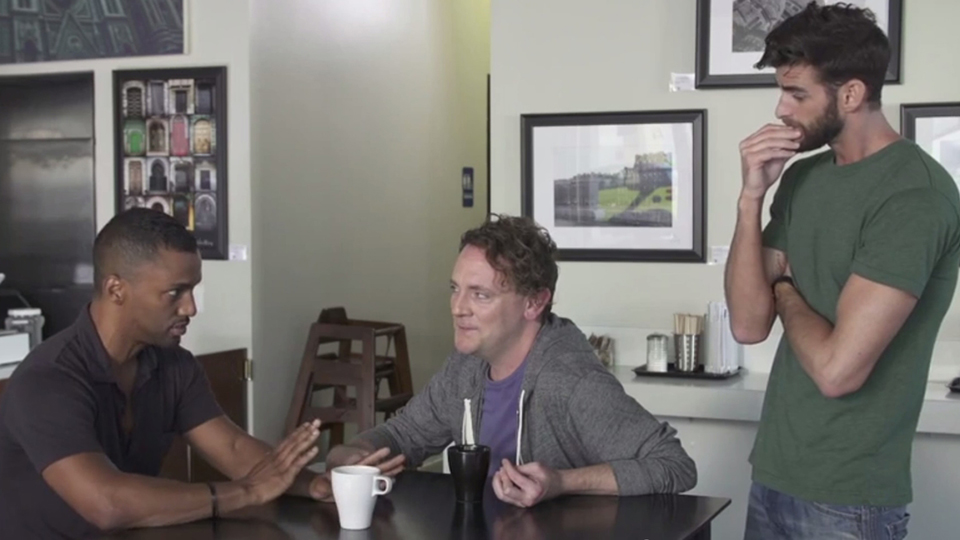 Coffee House Chronicles was written as a YouTube series with the aim of creating vignettes that reflected different aspects of the LGBT community. The series was edited into a 75-minute movie for its arrival on streaming platform Dekkoo and that’s the version that’s been picked up and released on DVD by TLA Releasing. Coffee House Chronicles: The Movie features a host of familiar faces and it tackles a wide range of subjects that affect the LGBT community every day.

The movie opens with Eli (Luis Selgas) arriving at a coffee house for a hook-up arranged over an app. Of course when he arrives, the guy waiting for him looks nothing like his picture and he quickly makes his excuses and leaves. Over the duration of the movie we’re introduced to a variety of characters and get to glimpse at them in situations that range from awkward to emotional. One of the best involves transgender man Leo (Ian Harvie) who arrives for a date with Rachel (Trace Lysette) and tries to pre-empt all of the personal questions she may have for him. It soon transpires that Rachel is hiding a rather large secret from Leo and when she discloses it, he’s forced to address his own prejudice in an interesting way.

Another vignette features married men Matt (Eric B. Anthony) and David (Eric Colton) who are forced into an awkward meet-up by their wives who don’t know that they’ve been having an affair. There’s a fun twist in that story that I thought was pretty clever and entertaining. Other standout moments include teenager Owen (Hunter Doohan) tricking older guy Dan (Nicholas Downs) into meeting up and a hook-up between Darin (Mykee Steen) and Matthew (Cesar Cipriano) that turns into an interesting discussion about racial prejudice.

The finest moment is between Jeff (Darryl Stephens) and his best friend Anthony (Drew Droege), who are talking about Jeff’s latest one-night-stand while the ghost of his late boyfriend Mitch (Chris Salvatore) watches on. It’s a surprisingly touching moment and one that addresses the idea of being open to new possibilities, wherever they present themselves.

Most of the vignettes in Coffee House Chronicles: The Movie are entertaining. The main problem is that it’s pretty obvious this wasn’t envisaged as a movie and while each story relates in some way, it doesn’t hang together brilliantly as a film. The actors vary wildly too in terms of their abilities and believability. Some were clearly cast for their looks but there are a fair amount of decent performances in the mix too with Ian Harvie, Darryl Stephens and Nicholas Downs standing out for me.

Coffee House Chronicles: The Movie is a fun watch. It tackles some interesting issues and subjects, and it paints a pretty accurate picture of the West Hollywood scene. If you’ve not been exposed to that, you may not quite get all of these characters but there’s plenty there to engage and entertain. Coffee House Chronicles: The Movie is worth your time despite being a little clunky and uneven in places.

In this article:Coffee House Chronicles: The Movie, TLA Releasing