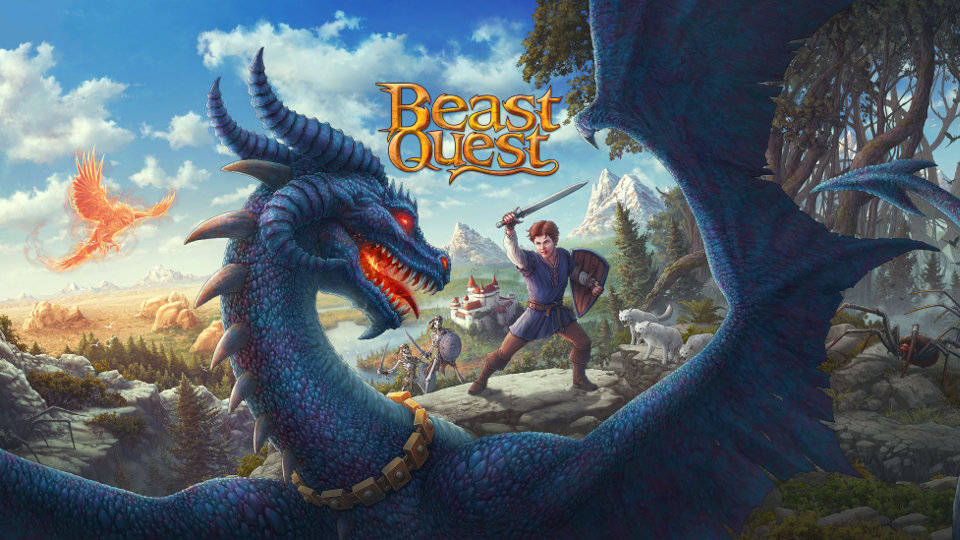 I’ve done something a bit different for this review. As it’s a game geared toward the younger crowd, I harnessed my eight year old boy in for a play of his own. To give you a bit of background, we played it both together and apart–he also kept a sheet of pros and cons which he thoughtfully wrote down for me to see. No stranger to video games in general, his dossier includes having a love for ‘retro’ titles such as Perfect Dark, Rollercoaster Tycoon, Bubsy/Sonic as well as a great appreciation of newer releases like Minecraft. I think this is important to mention as it no doubt shapes the way he looks at video games and their design through his little lenses.

Beast Quest is a charming tale of a young boy named Tom meant to save a kingdom from…well, mind controlled beasts, as dark magic has successfully corrupted the giant kaiju-like roster. Tom is a classic case of a hero that didn’t know he was meant to be a hero, but ultimately takes up the task for the sake of the beloved kingdom.

The game is a cute concept with decent graphics–you run, jump, fight your way to solve quests, and perhaps pick up a few along the way. In fact, most villagers have something to say to you–collect me ten flowers, fifteen of this, bring me back five of that. It breaks up your main questline, giving options to free movement within the world. It very much feels like baby’s first Fable. My boy particularly didn’t have a problem with grinding for points to upgrade his gear–he enjoyed how the results were there, and not out of reach to get. Oh, to be young again and not feel crushed under the weight of in-game grinding!

The combat system is a neat one. When entering a fight, it singles you out to face a handful of enemies RPG style. You get a hit in, they get a hit in. But the cool thing here is how you have the option to dodge and counter, along with shifting yourself completely on the playing field in battle. When you’re grinding, things can get quite tedious fast, but this serves well to break up that mundane feeling. It also helps to make you really feel like you’ve earned your points and aren’t just clicking text attacks Pokemon or Final Fantasy style, which if not for the themes we all love, would become quite boring after a while.

Now, for the bad. There are nitpicks, then there are the real problems. Starting with the most notable real problem–the game doesn’t feel complete. It’s a nice enough title, but the build feels lackluster, even for a game aimed towards kids. Solidifying this was when Sprout (my boy) completely gave it up to play Need for Speed Underground (A Gamecube game) one night. I asked how he was getting on with Beast Quest and the answer was very clear: the bugs had added up. And it was enough for a child to notice. I’m not saying he’s a expert analyzer, but for instincts at that age to kick in and go “This isn’t fun anymore” really tells a lot.

The jump animation bothered us both–it’s not even fully done, as Tom hovers and hangs in the air amateurishly. This lends to awkward climbing and platforming puzzles. The villagers have little to no basic animations. They all stand around stationary (with minimal shuffling), waiting to be approached. This isn’t uncommon in other games, however, they’re all programmed to move like one another and instead of this being effective to giving them life–it comes off as creepy.

View some Beast Quest screenshots in our gallery:

As the game is fairly linear on paths, it felt as if we were one jump on the boarder wall terrain from completely glitching out the game. The decision to not include swimming in the game was also one I found a bit peculiar. Instead of it being a way to keep the player on their toes, it felt lazy–as if it simply couldn’t be bothered with to animate and program. This is what the whole of the game feels like–one big cut corner.

A very valuable lesson to take away–kids are simple. They enjoy simplistic things, don’t need eighteen hours of gameplay, or customization options to the Moon and back. They don’t need pages upon pages of voice acting to be satisfied–what they do demand is honest quality. Even if a young player can’t quite articulate what it is they don’t like, they will sense it–and instead of writing a review for others to read, they will just not pick up the controller to play it again.

I think what Maxiumum Games attempted to do with Beast Quest is deliver a spellbinding fantasy RPG, but fell incredibly short. I am still impressed with their marketing campaign–Sprout proudly stated to me that he had seen an advert on the television for Beast Quest. Given the already discussed feelings on the matter, I was surprised. But even in the trailers for the game you know immediately what you’re up against. Tread cautiously if considering it as a buy for a young one–and probably best to steer clear if an adult.

Beast Quest was reviewed using a digital code supplied by the publisher.