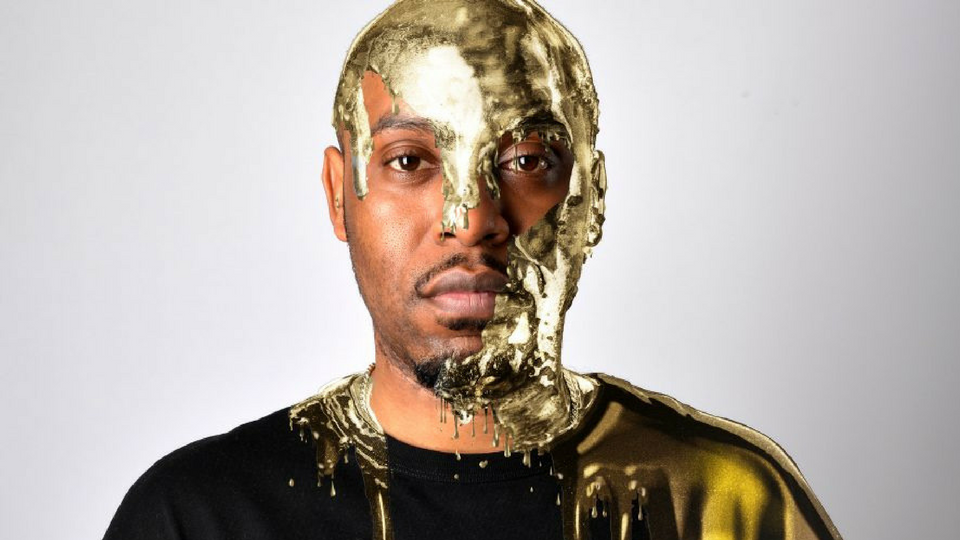 The time is now to become a follower of comic turned guru Dane Baptiste, whose critically acclaimed G.O.D. tour addresses today’s ‘new religions’ of Gold, Oil and Drugs in humanity’s pursuit of the ‘good life’. Carefully unpacking 2018’s revered ‘holy trinity’ of wealth, power and pleasure – from ‘money making the world go round’, to science being the ‘new God’, to drugs killing less people [and cows] than fast food, the show challenges why we’re OK with what we’re told.

Can comedy legitimately provide a new rhetoric and the much-needed counter narratives to not only encourage audiences to laugh, but question identities and perceptions and promote at its heart respect for all? Yes, and it starts with gaining grass roots support for Britain to leave the Eurovision song contest.

“The tour’s already kicked off and i’ve been to Belgium, Netherlands, Estonia -the Eurovision leg – and I have to say, they did not like my Eurovision joke.”

“They need to be told how they come across, because there’s a real snobbery towards Britain with Eurovision. Why do we care so much about it as a nation? Eurovision is for acts in the UK who have no other options. We have good music here, why do we need to prove that to the rest of Europe? The bar has become ridiculously low. Obviously Brexit happened, for one reason or another, but basically the question needs to be asked – why are we still putting ourselves through this as a nation?’

Having a pop at Eurovision isn’t just about challenging socially constructed identities in Britain, Europe and beyond. The context for the show couldn’t be more timely, although admittedly global instability ​seems to be the norm these days​ with widespread public distrust of political establishments, Facebook influenced elections and and fake news. In a world where the word ‘God’ has become the new ‘C-bomb’, G.O.D. sees the stand-up comedian, Sunny D BBC sitcom writer ​and panel show regular ​deliver some home truths on a global stage.

“Taking my narrative around the world is very pertinent right now, with UK government involvement in a war on the cards – although coinciding with it wasn’t part of the plan!” says Dane.

Before becoming a global campaigner on serious social issues through the medium of comedy, Dane has been well documented as having worked in an office prior to his comedic career – a move that is intrinsically linked to his ability to relate to the vast number of ‘nine to fivers’ who enjoy his shows and ultimately he attributes this to his success.

“Comedy has universal appeal and my entire creative vision is to provide a narrative from the other side of the microphone, as I can relate to broad based comedy audiences who go out each day, commute, work hard and come home.”

“I understand the emotional disposition of my audience – social commentary can be quite heavy going and I don’t want it to be too daunting, so I understand how far I can address it to get the right balance.”

“Sometimes views and ideas on the world of work are expressed by other comedians but not directly experienced. But it’s not just about having that awareness to inform my work, the understanding is also critical to how my shows develop.”

Dane Baptiste Live At The Apollo

Similarly, on the rise of comedy through the democratisation of the media particularly through social media, Dane sees this as the true gauge of his work by engaging with his audiences directly. He doesn’t read any reviews by the comedy establishment as they simply don’t form part of his creative motivations.

“If there are misconceptions around my work and art is subjective, that’s the way it goes. I’m not in the business of pandering to people. I don’t read reviews by critics or insular reviews in the industry. There is an inherent conflict between what tends to be older white men deciding the theory behind what makes something funny in order to review it, especially when they aren’t putting their theories into practice. When it comes to my work and how it is received, I stand by all my statements in my shows and if they’re misconstrued, i’m happy for anyone to contact me directly and i’ll dissect them. Though if the shoe fits…”

Original, provocative and exceptionally crafted, G.O.D. explores the distractions and attractions of modern human life; and how the pursuit of the ‘Good life’ can involve a lot of evil, vice and debauchery. But is that really a bad thing? It’s an exciting time to see this work.

The world tour hits Australia this month and is back at London’s Soho Theatre 29th May – 2nd June 2018.