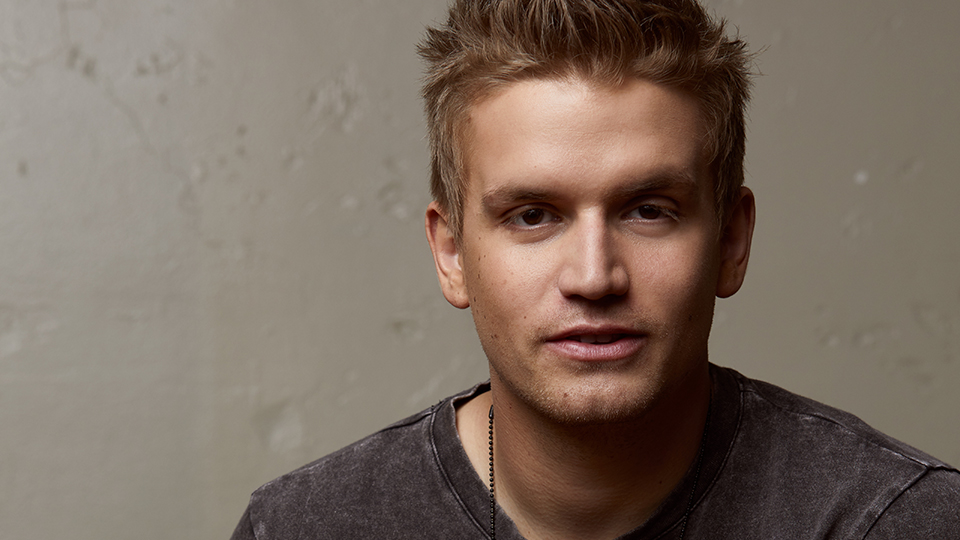 Levi Hummon may come from a country music dynasty, but he’s definitely carving out his own path in the genre.

The son of legendary Nashville songwriter Marcus Hummon, Levi has been making a name for himself with a clutch of catchy, upbeat tracks since releasing his debut EP in 2016. His single Stupid recently passed 10 million streams on Spotify, and he’s also been winning over fans in the UK since appearing at Country Music Week and C2C Festival.

I caught up with Levi at the end of the C2C Roadshow (where he appeared alongside Kristian Bush, Lindsay Ell and Twinnie) to talk about playing Country to Country, his new single Songs We Sang, and his top three dinner party guests.

It’s been so fun! We started off at C2C Festival here in London, then worked our way from the north all the way to the south. So we went to Glasgow, which was so fun. The other place which was amazing was Bristol, which was insane. It’s just fun seeing an audience actually growing in the UK and being part of the first wave of country artists who are here doing this.

Speaking of C2C – how did you find that?

Yeah, we actually had people singing the words back which was actually pretty cool. I find that the crowds here in the UK really listen, and they’re very excited after the song. It’s a very appreciative crowd. They know the words of the songs and they really concentrate.

Are there any songs that you’ve had a particularly good response to from the UK audience?

I think the song that I just released with Alison Krauss, called Love Heals, has been going down really, really well. Because it’s really got a message behind it, and people seem to really love Alison Krauss out here. They’re big fans! [laughs]

You’ve been over to the UK a few times recently – what is it that keeps you coming back?

So we originally came over here for Country Music Week in October, and I just fell in love. We had people that came to the shows three or four times. But I always try to come over to the UK when we travel. It’s such a great experience for me. I feel like the UK’s a new market for any fanbase. It’s a great group of people and I’m excited to be a part of it.

Tell us about your new single, Songs We Sang…

Yeah, so we released it just this past Friday in London. The song is just about growing up back in Nashville and all the things I used to remember. It’s crazy but I feel like every single song we sang had these amazing lyrics. It’s about me being at a point in my life where I’m starting to forget things from my teenage years and being in high school – I don’t remember some of the places we hung out or things that we did, but I do remember the songs we sang. So it’s about how music links in with those memories.

What were those ‘songs we sang’ for you?

Yeah, growing up I listened to Cat Stevens and then like Bob Marley, as well as country music. But the songs we used to sing were things like Dierks Bentley.

You grew up in Nashville – what impact did that have on your music?

Well my dad’s a songwriter, so I grew up in the world of songwriters and creative people. And so it was really always about finding those creative people and being around them. Nashville is such a centre for creativity – there’s so many songwriters and so much music that it’s almost impossible not to pick up on that. So I think that had a big impact on me.

What made you decide you wanted to pursue music as a career?

I don’t think I decided so much as it found me. I was always creative – I was really into art and drawing when I was younger – but music wasn’t something I got into until I was older, and then it just seemed like that was it for me.

…and then there was a podcast with you and your dad where you said that when you wrote Don’t Waste The Night you wanted to do something that felt like Fast Car. Is that typical of how you write?

That is actually so untypical from how I usually write. When I wrote that song I wanted to capture a vibe, kind of a combination of Ed Sheeran’s Don’t and the guitar part from Fast Car. So that was where that came from. But no, I definitely don’t usually write like that.

Are you someone who keeps writing and touring separate or do you write wherever you can?

I think I do separate them out. Like when I’m touring and performing, I’m focused on that, but when I go back to Nashville I’ll be concentrating on writing and recording and it’s totally creative mode.

Oh man, there are so many! But I wish I wrote The House That Built Me by Miranda Lambert. It’s such a good song, one of my favourites.

Who would your three ideal dinner party guests be?

Jesus, Gandhi and Buddha [laughs]. That was pretty easy actually. And I’d probably want some music there, so Elton John too.

You recently made your Grand Ole Opry debut – what was that like?

It was incredible. We’ve actually played there three times now and every time I think I’m going to be less nervous, but my knees are still shaking right before I go on stage!

Your song Stupid recently hit 10m streams on Spotify – what did it feel like to hear that?

That was huge. My manager kept updating me on the numbers and I was like ‘when we get to 10m I want to celebrate it’. And then it happened. It was so awesome to see that number hit.

Do you think the rise of streaming services has helped artists to reach audiences they otherwise might not be able to?

I don’t think I’d be in London right now if it wasn’t for streaming. It’s such an avenue for songwriting and for reaching new audiences. I am so grateful to the likes of Spotify and Pandora because they’ve made it so much easier for us to build fanbases around the world, and I feel like that enables us to come over here and play. It’s an amazing outlet for my music.

You recently released the video for Love Heals which featured your mum’s project Thistle Farms – can you tell us more about that?

Yeah, Thistle Farms is an organisation that works with women who’ve been the victims of drug abuse and prostitution in the United States. It’s such an important thing and I really wanted to do something to celebrate that and what my mom has done. She wanted to be part of the video so we worked together on it. For me it was important to feature the women who’ve been supported by the project – I wanted them to really feel like the rock stars of that video.

What’s the one thing you’ve learnt from being on the road?

Oh my gosh! I think you learn a lot from opening for other artists. I’ve had the opportunity to open for people like Sam Hunt and Kip Moore, and it was amazing. You watch a show, you watch an artist, and you learn from them. I think my shows are an amalgamation of all the people I’ve watched and who I am as an artist too. It’s awesome.

If you had a career bucket list, what would be on that?

I want to sell out the Ryman.

I really want to come back to the UK – that would be amazing. There’ll probably be some new music later in the year and I’ll be working on that. But right now it’s just about enjoying it. Good things always seem to happen when we release new music in London so hopefully I’ll come back to London!

Levi Hummon’s new single Songs We Sang is available to stream and download now. Listen to the song below: