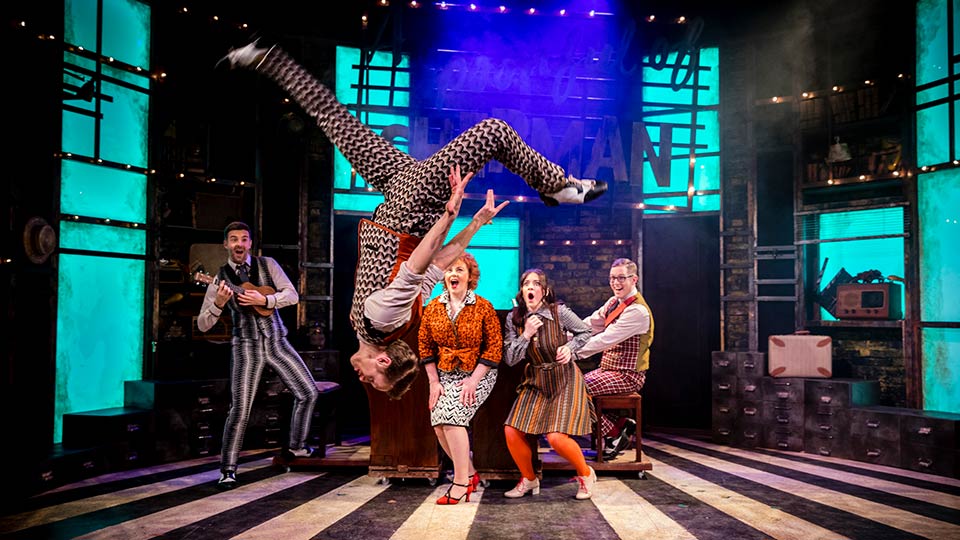 Subtitled the Songbook of your Childhood, this is a solid gold revue of Sherman
songs, serving delicious memories for a mostly adult audience. It’s a safe and
wonderful, grin-making experience, bright as a crafted toy, with more than just a
spoonful of sentiment.

The five performers – all dazzlers – hold the evening of song together with
biographical titbits from the Sherman brothers’ lifetime in song. Gathered round two
wheeled-around pianos, they tell us we’re about to hear songs where we know all
the words. A little strange given the initial songs aren’t that familiar, certainly not the
earworms that defined Sherman’s work with Disney. But no matter. We’re here to
smile and marvel at the deceptively simple genius of Richard and Robert Sherman.
And it is genius. Driven by father Al Sherman’s three ‘S’ rule – songs should be
singable, simple and sincere – we learn that the brothers slowly blossomed from
pop song writers to Oscar-winning tunesmiths at the top of the Disney table. As
we’re told with winking grins, they were an overnight success that took ten years to
make.

Even the less familiar tunes are instantly enjoyable. The early rendition of ‘Comes A-Long A-Love’ from Sophie-Louise Dan is everything the rule asks: a simple, giddy love song that grows before you, with a performer that knows how to sell it.

Moving on through the ‘Ugly Bug Ball’ and ‘The Wonderful Thing About Tiggers’, the
Sherman’s love of character shines through. And we’re kids in front of the screen again,
bobbing our heads, on the verge of singing along.

The Mary Poppins segment is achingly beautiful, dimming the lights for the hymn-like ‘Feed the Birds’ and culminating with the glory that is ‘Supercalifragilisticexpialidocious’. Glen Facey’s athletic rendition of ‘I Wanna Be Like You’ from The Jungle Book is another beacon of joy, lighting up the second act.

The Sherman family motto runs through the show, something like the Musketeers’
all-for- one-and- one-for- all. It means we’re treated to a little of father Al Sherman’s
work in the opening. Later we get a little from Robbie, their son and nephew, who
penned the recent Edinburgh hit, Lovebirds. It’s a neat way to hold the revue
together even if it’s a little generous on the sugar, making you wonder what salt’s
been left from the night’s biography. Still, it gives a sense of hope never fading and
talent ever-moving onwards.

It’s hope that’s addressed in the closing scene, as the cast recount the Sherman’s
fading stock in a changing world. But remember, we’re not here for sad songs and
creative difficulties. We’re here for happiness. So we’re told of the two West End hits
– Mary Poppins and Chitty Chitty Bang Bang – and worldwide tours that introduced
new generations to the Sherman brilliance.

The encore is a welcome return to Mary Poppins, with ‘Let’s Go Fly A Kite’ bringing
the sweetest of evenings to a satisfying close. Even though the audience are
encouraged to clap and sway along – a little music hall for my tastes – it guarantees
one final soar that sends us into the night with huge, dopey grins. Children again for
an hour or two.

A Spoonful of Sherman has more than just a spoon of the sweet stuff but it’s also a
feel-good treat for any fans of song and musical theatre, or those long-ago days
when life seemed a simpler affair. Which I think means an audience of just about,
well, everyone.