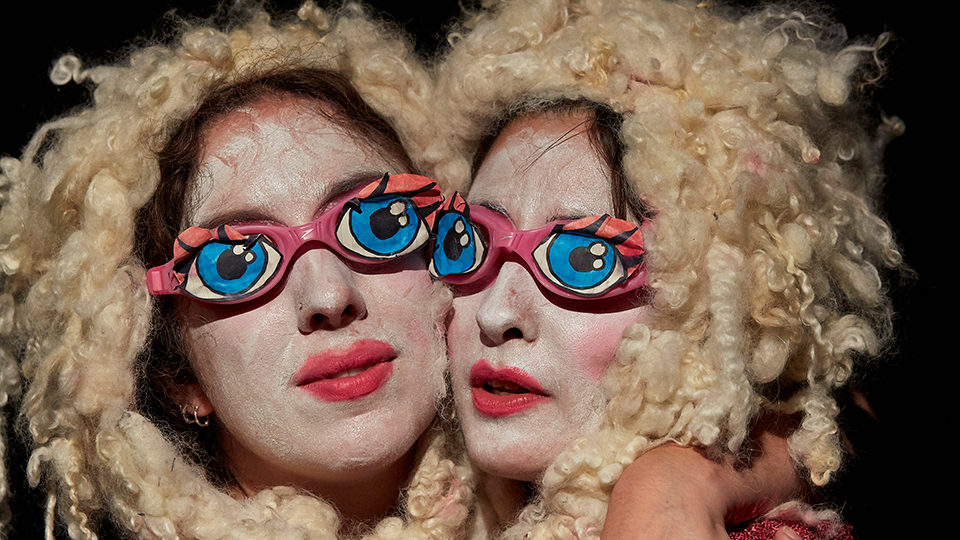 Dolly Would. That’s a great title. What would she do? I often say this to myself when I’m feeling a bit weak, not about Dolly, but about Madonna. What would Madonna do? But then, there’s not a lot that she wouldn’t do, but hey, you catch my drift. From the title and the poster for the show I was expecting two drag queens camping it up and being OTT fabulous as they visit Dollywood. If you’re not aware, Dollywood is Dolly Parton’s very own theme park, based in Nashville. Or, I was thinking, maybe the show will resemble something like Priscilla Queen of the Desert, that was just my mental image from the poster and the text introducing the show. More fool me for judging a book by its cover. The first shock of the evening came in the form that the ‘men’, were actually women! No drag queens here.

The show is billed as a show about: Dolly Parton, Cloning, Immortality and Death. I’d say the show is about: Dolly Parton, Dollywood, Dolly the Sheep, Silliness and Boobs. Or just mainly about boobs, actually, in every scene. But, what would art be without a little nudity, hey? It’s one of those shows that you may find yourself in, in the early afternoon in Edinburgh and you sit there thinking: what on earth is this? I’m betting it would be a lot funnier after a few pints, the excessive silliness might then make a bit more sense. Flitting between Dolly Parton, and Dolly the Sheep, the show is just absolutely bonkers.

The two performers have clearly put a lot of work in to the show. The background videos that are projected behind them throughout the show – in which they semi-narrate, make the show funny. Selfies at Dollywood and the various tat that they find on sale there, in which they devour, is a particular highlight and a very funny moment. I felt that they definitely tapped in to the old eccentric and sometimes childish British sense of humour, because we are generally, as a nation, often so outwardly conservative in public. A bit like laughing at farts, or fart jokes. Except in this case, the punchline was boobs. Walking around as two giant inflatable boobs, trying to crush balloons as they rolled around the floor was just strange. There are a lot of strange moments.

They show their talent in the songs that they have written, and they are very liberal performers. Dolly Would is a good bit of fun at times, but I just found the show to be a bit too wacky and silly, rather than laugh-out-loud funny.