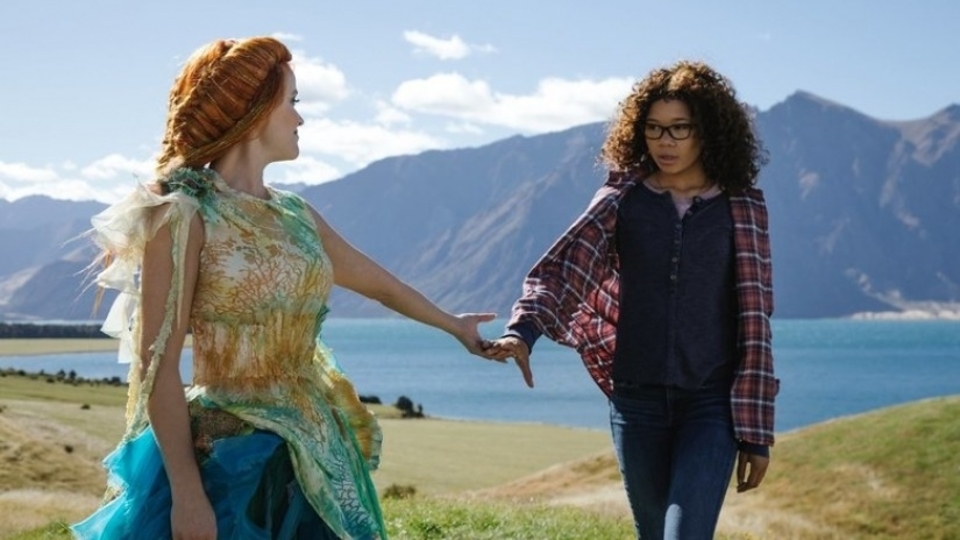 A Wrinkle in Time, in many respects, feels like The Matrix Reloaded of family films – a confusing and uneven adventure that’s a bit too cerebral for its own good, but has moments of wondrous spectacle. It’s such a mixed bag that the end product leaves you feeling underwhelmed, despite the film managing to conjure up some genuine warmth and compassion which does just about enough to hold it all together.

Young Meg (Storm Reid) was a bright and engaging pupil until the mysterious disappearance of her scientist father (Chris Pine). Now struggling to find peace, she is an outcast at school and can’t come to terms with the loss of her father for the past 4 years. Her younger brother Charles Wallace (Deric McCabe) and a fellow student named Calvin (Levi Miller) find themselves transported to a far away land by three peculiar beings named Mrs. Which (Oprah Winfrey), Mrs. Whatsit (Reese Witherspoon) and Mrs. Who (Mindy Kaling), who have information about her Dad. He’s lost in a wrinkle in time and space, so Meg must get to him before it’s too late.

The hype machine has been in full swing for this, with Selma director Ava DuVernay heralded by many as a beacon towards a more diverse and well represented Hollywood. To her credit, the film looks stunning, with effects and situations that genuinely hook you in. It may be a tad too frightening for younger kids but there are moments in A Wrinkle in Time where DuVernay’s keen eye for grandeur really comes through with startling effect. But the whole project seems confused to what kind of a film it really wants to be.

For all its bells and whistles, the film has to deliver in some key areas and it fails to do that. The screenplay by Jennifer Lee and Jeff Stockwell seems to lack the vibrancy of Madeleine L’Engle’s book. The cast are in no way to blame, and they all do exceptionally well given the circumstances. Chris Pine and Gugu Mbatha-Raw are as engaging and watchable as you expect them to be, and were an inspired casting choice to make. Levi Miller does well as the token love interest while Deric McCabe shows some impressive potential as kid-genius Charles Wallace. But it’s Storm Reid’s star that shines brightest here, handling the responsibility of leading such a big project with a calming authority well beyond her years.

The same can’t be said for Winfrey (who looks bored throughout), Witherspoon (who seems to be in a different film entirely) and Kaling (extremely underused). These characters should have been the emotional glue for the whole story to come together but they seem under-developed throughout. There are some great cameos from Michael Peña and Zach Galifianakis though, and David Oyelowo does well as The It – the demonic like presence that stalks them all.

A Wrinkle in Time has merits and it’s a well made movie – it just lacks that honest spark of magic. Some basics should have been addressed to ensure that this story did the book justice, and it really should have used its cast in a more engaging way. Too inwardly convoluted for younger souls, A Wrinkle in Time is a passable family film that could and should have been infinitely better given the sum of its parts.