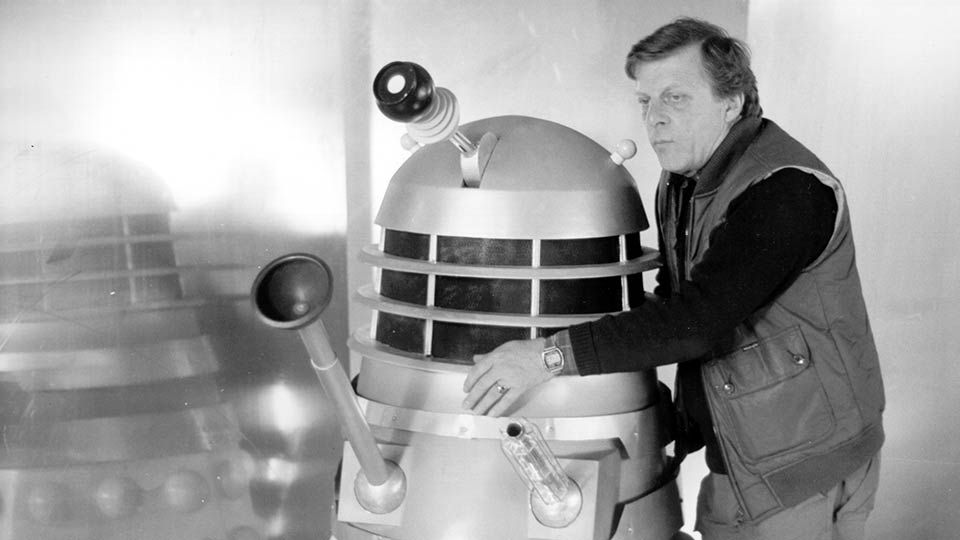 The wonderful world of Doctor Who (1963-89) is celebrated as Koch Media thankfully continues to compile the Myth Makers interviews in compilations, releasing them on DVD for the first time.

Earlier releases of these treasure troves from Keith Barnfather and Nicholas Briggs have featured the companions of particular Doctors’ eras. This time, it’s the actors who sent you scurrying behind the sofa who are given the spotlight! From Cybermen to Daleks and their creator Davros, you meet the actors behind the costumes who provided the nightmares to generations of children!

After a banter-rich introduction from the dynamic duo Briggs and Barnfather, the first disc opens with the documentary I Was a Doctor Who Monster! which was made in 1996 at the time the Paul McGann TV movie was being made. It’s presented by that most loveable of Doctors, Sylvester McCoy (check out our recent tribute to the Seventh Doctor), based on his idea. Filming took place inside and outside of Riverside Studios, where many of the classic 1960s stories had been shot (now a pleasant theatre). Rather than just assemble the actors, the documentary also reconstructs some of the early sets – a startling insight into the magical illusion of television – complete with a few tongue-in-cheek reconstructions. The early years are covered by John Scott-Martin, Cy Town and others, right up to David Banks and Lisa Bowerman from the 1980s’ era. It’s the only place you’ll see Cybermen and Dalek operators of every decade of Who sharing stories, making it a must-see for fans, and the inclusion of Sophie Aldred is a welcome bonus.

The rest of the first disc contains interviews with two famous names in Doctor Who folklore. What more appropriate way to begin than with the man who designed the Daleks – Ray Cusick? Always of a serious disposition, there isn’t too much levity to be had here, despite Briggs’ best efforts to make Cusick crack a smile. But as a designer on early Doctor Who, and of course, the man who designed the Daleks – an iconic image known the world over and still terrifying children today – he was an extraordinary man. Filmed at him home, Cusick produces some of his early hand-drawn designs for Doctor Who’s most famous monster.

Next up is Michael Wisher, who originated the role of Davros in the classic Tom Baker serial Genesis of the Daleks. Michael died in 1995, so his instalment is interspersed with reminiscences from Barnfather and Briggs, and, touchingly, his son Andy Wisher, and the recently-deceased Peter Miles. Barnfather explains that he wanted the Myth Makers documentaries to give a rounded view of the talent involved, rather than focussing on their contributions to Doctor Who. In my view, that’s what makes this series so special and rewarding. Doctor Who is by no means diminished though – and there’s plenty of footage that fans will adore – namely Wisher taking to the stage in a smart suit and Davros mask in a convention in 1984!

The second disc starts with David Banks, the distinctively tall actor with the rich voice who properly defined the Cybermen throughout the 1980s through his recurring role as the Cyber Leader. Briggs catches up with David in Brighton during the production of the Doctor Who stage spectacular – The Ultimate Adventure. Some of the interview takes place on stage, as Banks shows Briggs his then-new Cybermen book, though the props and sets for the show also appear in a backstage segment. David later talks from his dressing room in the costume he wore to understudy the Doctor, before a drastic change into his Karl the Mercenary regalia! Check out our in-depth interview with David Banks for more.

A man with a list of credits longer than most actors could dream of – but mostly for a rapid succession of tiny parts – comes next. It’s always fun spotting Cy Town in Doctor Who, though it’s often blink-and-you-miss-him (he’s the first victim of Helen A in The Happiness Patrol). His greatest claim to fame is being a Dalek operator, and he’s filmed at a convention in Ipswich in 2006, talking individually, but he also appears on stage with Terry Molloy.

The last contributor is the late Jack Pitt, whose acting career stalled after his involvement with the show during the Hartnell era, during which time he played a succession of monsters. What Pitt gives is an astonishingly frank insight into what William Hartnell was like as a man, and an anecdote about Hartnell and Bernard Lee (M in the early Bond movies) squaring up to one another in a pub has to be heard to be believed. Gossipy, certainly. Malicious? No, not at all. Pitt clearly adored Hartnell – an unusual friendship you may have thought – but his contribution is a personal and affectionate look at the genesis of the show, as well as on the original lead actor.

The Monsters collection is another reminder of how grateful fans of the show can now be that these intimate and loving interviews with the stars of the original series were made, and the debt of gratitude owed to Briggs and Barnfather. Sadly, from this collection, Wisher, Cusick and Pitt are no longer with us, but these features are a lasting testament to their life and work, and their remembered contribution to arguably the most iconic British television series ever made.