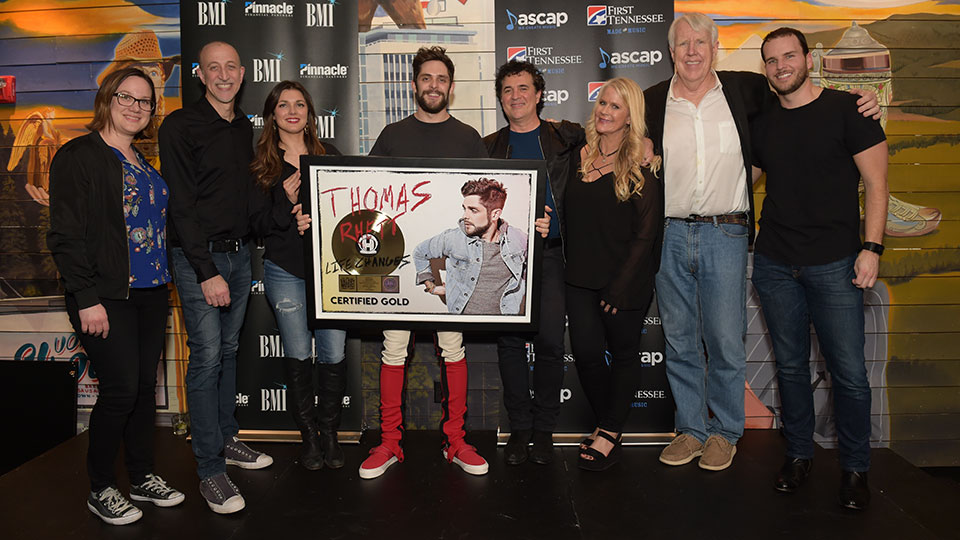 Thomas Rhett recently celebrated his eighth and ninth career number ones and he was surprised with a plaque to commemorate his latest album Life Changes being certified RIAA Gold.

Rhett gathered with friends and family in Nashville to celebrate his Platinum hit Craving You (featuring Maren Morris) and Gold hit Unforgettable topping the charts. He was joined by Craving You songwriters Dave Barnes and Julian Bunetta and Unforgettable’s Jesse Frasure, Ashley Gorley and Shane McAnally.

Life Changes has surpassed 500,000 units sold in less than six months and Rhett is heading towards another career milestone with current single Marry Me, which was recently certified Gold.

This week Rhett will be recognised as a CMA Triple Play Award recipient, which honors songwriters who have penned three No. 1 songs within a 12-month period. Rhett’s own songs Die A Happy Man and Star of the Show make up two of the three, with the third being Think a Little Less, which was co-written by Rhett and recorded by Michael Ray.

Life Changes is Rhett’s boldest album to date and he continues to push the boundaries of contemporary Country music. The album was nominated for a 2018 Grammy for Best Country Album and has been streamed more than 400 million times.

In April Rhett kicks off his Life Changes Tour 2018, which is the follow-up to his globe-trotting debut headlining tour Home Team Tour.