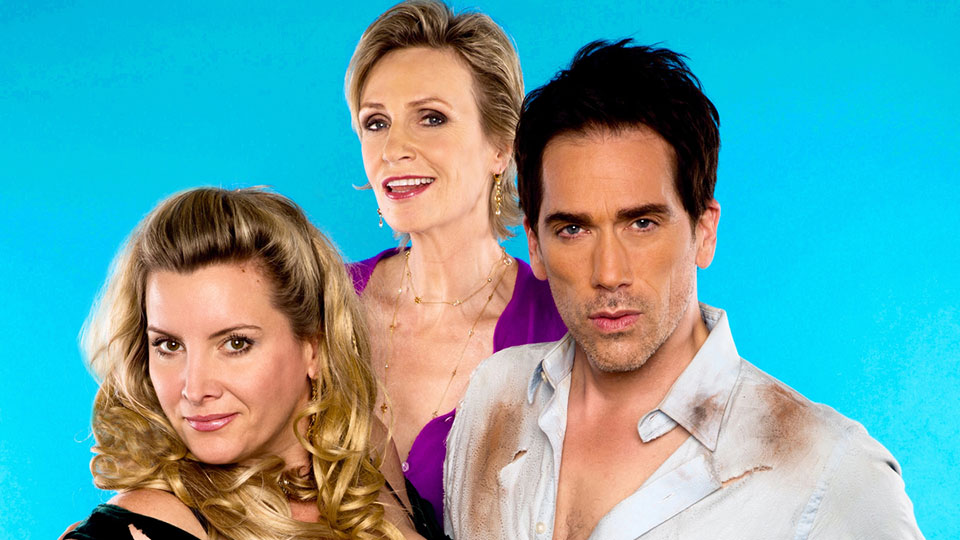 Dropping the Soap first premiered on streaming platform Dekkoo in 2017 after being in development since 2013. Originally Lisa Kudrow, Dan Bucatinsky and Don Roos were attached as executive producers along with Glee star Jane Lynch but only Lynch, who also stars, was involved with the finished product. The web series features 10 episodes that tell the story of the cast and crew of daytime soap Collided Lives, which is suffering from poor ratings and being threatened with budget cuts.

New producer Olivia Vanderstein (Jane Lynch) takes over the show and she immediately makes her presence known by firing lots of people and shaking things up. Leading man Julian Draker (Paul Witten) is safe from Olivia’s vision as she likes him but she’s completely unaware that he’s in the closet. As Julian tries to stay in the closet using his co-star Shea (Suzanne Friedline) as his beard, not that she’s aware, he locks horns with Kit Knockers (Kate Mines), the entitled daughter of the show’s former producer who co-stars in Collided Lives and has leverage to use against him.

Dropping the Soap really is quite hysterical. It perfectly skewers the ridiculous soap opera genre that is so deeply rooted in the US culture. Each episode opens with scenes from an episode of Collided Lives and as the 10 episodes progress, they get wackier and wackier ranging from a Titanic rip-off through to aliens. Julian, perfectly played by a very funny Paul Witten who co-wrote the show, is desperate to be acknowledged as the number one reason why people tune in and it’s interesting that he’s almost as deluded as the rest of his cast-mates.

Kate Mines is hilarious as Kit Knockers, often matching Witten’s sharp comedic performance and stealing a few scenes. A favourite moment that comes to mind is her insistence on inserting herself in a fragrance commercial shoot of Julian’s that has nothing to do with her. While he’s chewing scenery, she’s doing everything she can to be the centre of attention and she’s brilliant.

Jane Lynch doesn’t stray too far from Sue Sylvester territory here but she did pick up an Emmy for her performance. No one delivers cutting and deadpan quite like she does and while the character is hardly a stretch for her, she ensures she’s memorable every time she appears on screen.

My only real complaint about Dropping the Soap is that it’s too short. I could have stayed in this world for a lot longer and I hope that more episodes are on the way. It’s genuinely very funny, the cast put in superb performances and there’s definitely plenty of mileage for the show. Paul Witten and Kate Mines are so wonderful together on screen that I’m desperate to see them facing off for another season, especially given the jaw-dropping way the season ends.