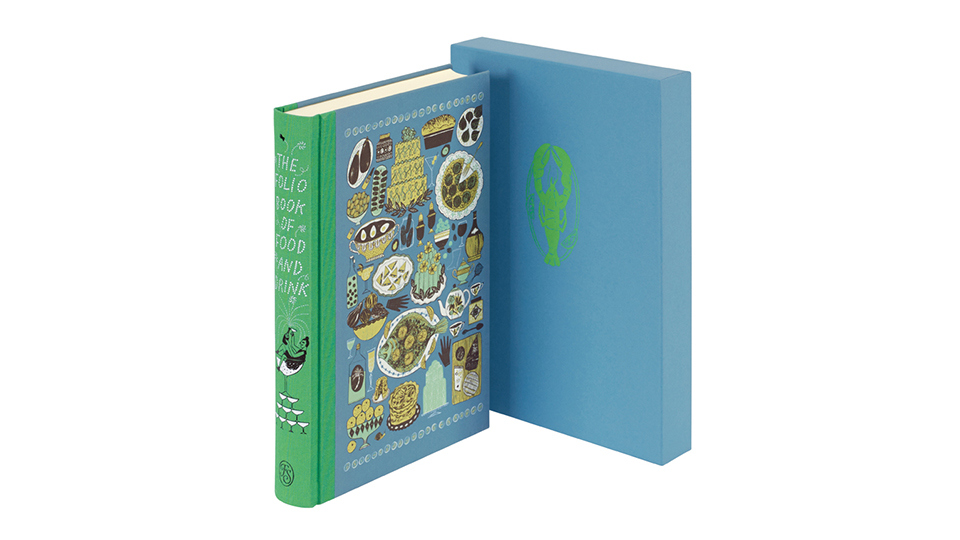 Known for their beautifully designed and illustrated collectible books, The Folio Society has really found a market for itself with those of us that prefer physical copies of our reading material. Not only that but these beautiful editions look stunning displayed on your bookcase and are of the highest quality you can get. One of the latest releases is The Folio Book of Food and Drink, an anthology based around culinary enjoyment.

Contained in a blue protector case with a lobster printed on it in green, The Folio Book of Food and Drink is a collection of extracts from fiction, non-fiction, poetry, prose and drama. The book features an introduction from Jojo Tulloh, the former food editor of The Week. She does a wonderful job of describing what you’re about to read and reminds you of the close links between food and writing, something that has existed for hundreds of years.

In many ways The Folio Book of Food and Drinks takes you on a journey. Following Tulloh’s engaging introduction, the book begins with a chapter titled The Fat of the Land, after John Seymour’s book of the same name. An excerpt from that book is included here and Seymour explains the horrified reaction of guests when they realised he had killed the animals that resulted in the meal they were about to eat. He ponders about a life of vegetarianism and explores the idea that many people prefer not to think about where their food comes from.

The whole chapter looks at where food comes from and the brutal nature of how it ends up on your plate. As Seymour stated, it’s something most of us don’t want to think about when we’re tucking into a meat casserole or enjoying a bacon sandwich.

After that first chapter each subsequent one tackles a different area of food and drink from seafood to wine through to being a respectable host and everything in between. For the casual reader they will pick out the selections from more well-known names such as Jane Austen, Charles Dickens and Oscar Wilde, while the more discerning reader will be delighted by some of the lesser known inclusions here such as Alexis Soyer, William Hazlitt and Jan Struther.

One of my favourite inclusions in the book is the excerpt ‘Not So Very Depressing’ from Kenneth Grahame’s The Wind in the Willows, which features in the Melancholia chapter. The passage is a conversation between Rat and Mole as they reveal different ways of looking at their food shortage. For Rat it’s an opportunity to scavenge and find food but for Mole, he’s given up before he’s even started.

Another favourite is ‘Vomitoria’ by Juvenal from The Satires, which is featured in the Stimulants chapter. Written in the late 1st to early 2nd century AD the passage shows just how long our awkward relationship with alcohol has existed. It describes a woman who guzzles down plenty of wine before bringing it all back up when she vomits on the pavement. It conjures a very vivid image and one that is easily relatable to in the present day.

Throughout the book there are a selection of cartoons and 19th century illustrations that break up the text and add further enjoyment as you work your way through the hefty tome.

The Folio Book of Food and Drink is a real delight for anyone who enjoys spending time in the kitchen or eating out at a restaurant. The anthology spans such a long period of time that it’s fascinating to see how some views have evolved when it comes to food and drink while others have stayed fairly similar. It also serves to highlight a ton of books you’ll want to add to your reading list so you can read the full works.

The Folio Book of Food and Drink is available now exclusively from The Folio Society.

Published by: The Folio Society

In this article:The Folio Book of Food and Drink, The Folio Society