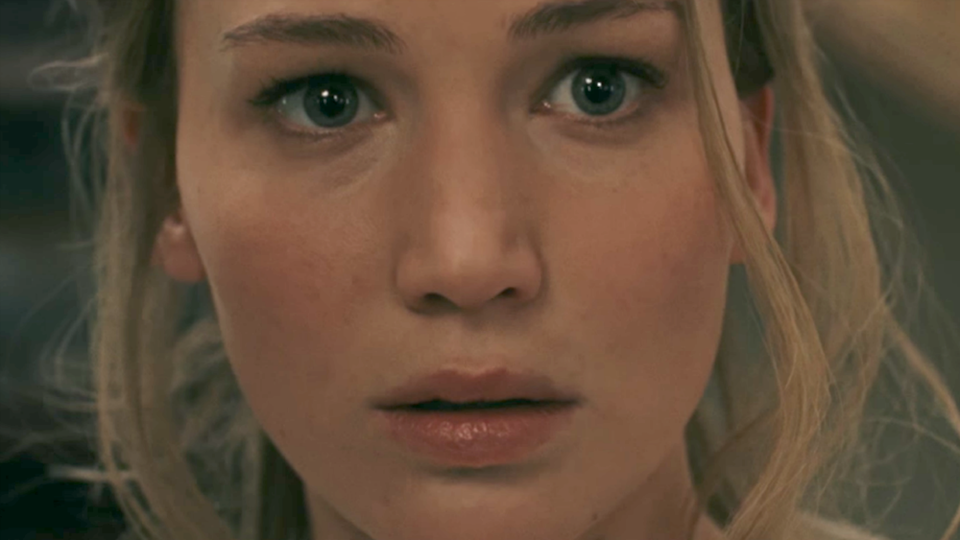 For the majority of the running time of Darren Aronofsky’s mother! (the exclamation mark is wholly earned) I wasn’t sure if I was supposed to be terrified, horrified, completely nonplussed, or roaring with hysterics. That it elicited all of these reactions over its two-hour running time, should perhaps give you an indicator of the bug-eyed craziness of this film. An allegorical Grand-Guignol that very few filmmakers would have the balls (or the clout) to get on screen, but with the star power of Jennifer Lawrence front and centre for every single frame of this madness, Aronofsky somehow pulls it off.

The film sees Lawrence’s mother living in a tranquil paradise in the middle of nowhere with her much older husband, Him, played by the impressively intense Javier Bardem. He is a famous poet searching for inspiration, whilst she busies herself with the epic task of remodelling their huge sprawling house. Their peace is shattered by the arrival of a mysterious and vaguely threatening couple, Ed Harris and Michelle Pfeiffer. Bardem welcomes them into their home without question, and so begins a strange, and deeply unsettling psychological thriller as Lawrence tries to regain control of her home from these parasitic intruders.

As he has shown on numerous occasions, Aronofsky is well versed in the language of horror cinema, and with mother! he playfully teases us with what this film could be. A haunted house thriller with things that go bump in the night. A fleshy, Cronenbergian horror, with hints that the house itself may be alive. A paranoid thriller, riffing on early Polanski. Or a new take on the classic uninvited guest. But really, it’s none of these things.

He throws all of these genre tropes at the screen, whilst also making the stylistic choice of shooting the entire film around Jennifer Lawrence’s face. Every single frame of mother! is either her face, over her shoulder, or her POV. It has the simultaneous effect of ramping up the claustrophobia, paranoia, and fear she is feeling, and making it teeth-gnashingly uncomfortable for us to watch. As her agency is stripped away, and her husband just lets these people bring their entire lives into their home, I found it at times to be incredibly difficult to sit through.

But this is only half the story. At the mid-point of the film, something happens which changes everything. And when that change comes, the film explodes into something genuinely unexpected and shocking. The final half hour of mother! makes Black Swan look like Paddington. Swerving between unnerving, nauseating, and downright horrible, mother! is a vivid and original piece of filmmaking. It is also a very challenging viewing experience, likely to test your patience, not just with the film itself, but also with Aronofsky’s eye-rolling pretentions.

For all it’s technical merits and excellent performances, mother! is ultimately a frustrating and empty vanity project. An exploitation movie retelling of the story of creation, crossbred with Aronofsky’s own conceited metaphor for the struggles of artistic creation. He’s a great filmmaker, with a unique and original voice, and anyone who can get a film like this through a major studio deserves some credit. Likewise Jennifer Lawrence is extraordinary in what is surely going to be one of the most challenging roles of her career. But this is not as clever as they think it is. It’s about as subtle as being smacked in the face by the Codex Gigas.

mother! is definitely worth a watch, and I guarantee it will be unlike anything you’ve ever seen before. Fans of extreme gore will also be satisfied by the film’s more extreme and controversial moments. Just don’t take it too seriously. It is absolutely fucking bonkers.