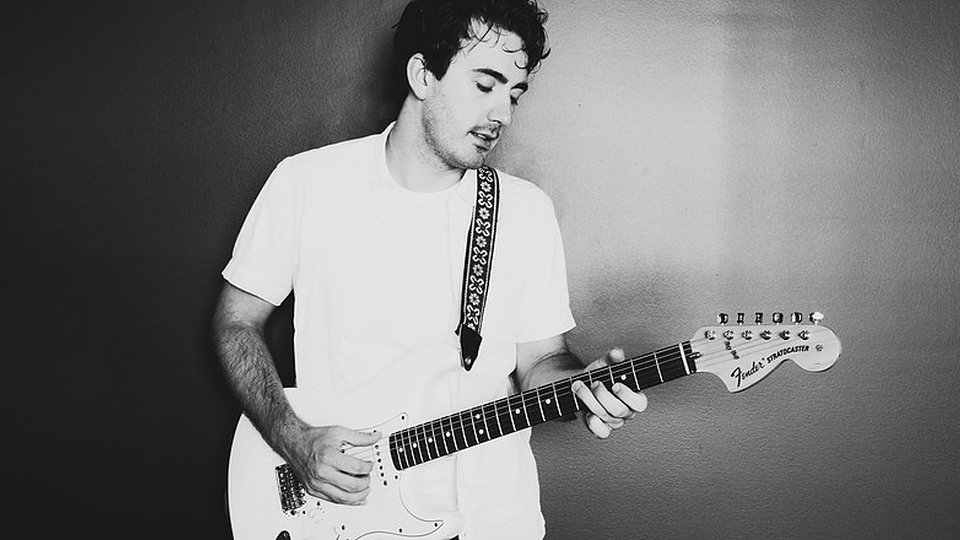 Nashville recording artist Paul Childers has big plans for 2018, and at the top of the list is introducing himself to UK and European audiences.

Childers somehow magically connects youthful pop enthusiasm with jazz, blues and RnB influences, as well as remarkable guitar skills. Bursting with creativity and bouncy, hooky choruses, he ties it altogether with a repertoire of well-written songs that tug on the heartstrings.

The young musician recorded his debut album last year, Naked Poetry, which reached #27 as a best-selling pop album on the global chart in its first week.

He chatted with me about working his way up the music ranks, where his unique sound is derived from, and why conquering Europe is his next step.

Congratulations on the new live album! Tell me about the night you recorded it.

We recorded it in the best club in Nashville, the first floor at Acme Feed & Seed. Oh my gosh, it was a night. I was so scared, because we knew we were going to have a live album and this performance is going to be it. Sometimes you can record the next four shows and then deliberate, but we didn’t have that, so there was a heighted sense of importance. On the night, one of my friends pulled me aside and was like, ‘dude, who cares?’ And that was all I needed to jump on stage. The crowd was amazing; people singing your songs back to you, that’s still not something I’m over.

I don’t know if I ever will be. The set list included eight original songs and two covers; Sir Duke (Stevie Wonder) and Roxanne/Ain’t No Sunshine (The Police/Bill Withers). We cut it that night, September 29th and, my God it felt good.

Why was recording a live album important to you, considering Naked Poetry has only been out a short while?

Because my stage self, and my album self, are almost two different people.
My favourite song is whatever feels good live, because every night I find something new in these songs. If a song is truly well-crafted, you can play it in any format; you can make it a Bossa nova, a reggae, it will still have that quality that you go back to the place where you wrote it. I’m a master of nostalgia and writing songs is a great way to time travel.

Tell me some of the stories behind Naked Poetry, I believe you wanted it to follow an arc, or timeline covering your life in the past few years?

I love the idea that, from the beginning to the end, this story, Naked Poetry is a concept and my life is in this state.

It begins with Music Pulls You Through, which is a mantra, everything I’ve ever needed can be found in music, and that’s all I wanted to convey. I start that song with two different people’s perspectives, because everybody’s affected by it.

Then, it moves to The Art of Being 20, which I thought would be 20, but it’s also 21, 22, 23 (laughing)…and that’s autobiographical, it’s my life right now. My Love of the Rain is the cinematic piece, we were playing wine glasses on it, all kinds of crazy. I wanted it to have water in it, and it rained on the day we recorded it, so we stuck mics outside with umbrellas stuck to ‘em. You can hear cars whooshing by. Naked Poetry is the title track, and then there’s No One Goes Dancing Anymore… Then they get slightly darker, Disclosure is about finding oneself and maybe not being thrilled by the image.

Sometimes, it only lasts the four minutes that the song is, and sometimes it lasts a year. And, there’s the final reprise of the very first love song, which is Stay a Little Longer.

The whole album was an accident. At the time, I was in a studio cleaning up after other musicians making my album at night, no plan. I was just writing what was happening to me.

Now, I’m writing in a very different way, I’m writing empathetically about people I don’t know and making up stories, and it’s fun. Whereas that one was just ‘this is my life as I know it’. It’s a 13-song exodus of my life.

How did the opportunity come up to secure the studio time to record Naked Poetry?

I was in university, and I found a friend I had done some projects with, he knew I was a guitar player, and he just flat out said, ‘hey man, if you to intern here, you’re more than welcome to come by (the studio). I can’t pay you, but I can teach you’, and that, to me, was the warmest invitation I could have received. I know an opportunity when I see one, so every day I would turn up, and it was a very interesting, journeyman way to learn. I learned how to do the taxes, how to balance the budget, and I was 17. To do it in that way just dropkicked me into the real world. It was at MagmaTone Recording Studio and it’s not actually a studio anymore, but I had luckily met friends and moved to this new place called County Q, which is now a forever home. That was where we did Naked Poetry and all these things.

I was just kind of goofing around and I befriended an engineer, who is now one of my best friends, Nick Lutz, and he said, ‘this stuff is so cool, I’ll work on it for free’. That was all I needed. I now had the room and the engineer. I realised this is the total backwards way to do things, but it felt so good, we have to do it now, this isn’t a choice anymore.

I had my band who I tour with, everyone is my age so the record has a sense of youth, so it’s bouncy. It feels that way because we were all just standing there so excited saying, ‘look at us. This is happening’. There might not be a better feeling than when you play a take, you look at each other and say, ‘I think that was the one’, and you slide the headphones off, and you go listen, and then that first hear outside of the headphones; you’re hitting each other going, ‘this is it!’ It’s such a fraternal camaraderie, and I wouldn’t have done it any other way.

Who were your early music influences, and how have they shaped the artist you’ve become?

When I started out playing guitar, I wasn’t going to be a singer or a writer, I was like a Stevie Ray Vaughan nut. I loved everything he did and loved everything that Hendrix did, and B.B. King, so Blues music was my baptism. Later I found out, well, these heroes of mine, they do sing, and a voice is like any other instrument, a muscle that you train. And, I feel like anyone can sing if you work at it enough, so I tried and worked harder, and I had something to say. Not everyone does. I wanted to sing songs and there weren’t covers to do that, so, I needed to write it. I wrote some terrible songs. I started when I was 13, and I guess over time, you meet these friends in college who change, not only the way you think, but also your sound, and you change. I met a guy who was a jazz nut who introduced me to Miles Davis and that changed everything, in terms of song structure and harmony. Like, I can go beyond the blues chords. And so, I guess that lead to slowly getting jobs in studios. I moved down to Nashville to study accounting. I knew this was the place, I didn’t want to be an accountant, but music is a business and I’m independent, so it’s just as important that I understand how to stay afloat as well as creatively be explosive. Both are just as important, one can’t live without the other. I knew that if I got to this city, I could make a path. That was five years ago, and Nashville in these five years has mushroomed into this mecca. People are coming from all over the world to see what Nashville’s all about and I’m so grateful. I play on country records all the time. I’m a studio musician working at County Q and every day there’s a country record.

Early last year you performed a gig with Vince Gill to officially open the Songbirds Guitar Museum in Chattanooga. What was the experience like?

That whole day we went through the museum together, and they had guitars all of us had never seen. It was magnificent. It came about because my team took a chance and saw it through and now the relationship with the museum is incredible. Recently, it was Chuck Berry’s birthday bash and I played his 335. He had played Johnny B. Goode on it, and then they asked me to play Johnny B. Goode on it. It was one of the most incredible experiences of my life. I always think about guitars as notebooks, and Chuck Berry has most of the pages on that one, but every time someone else plays it, they get to add a line, or say, ‘may I contribute a verse’? The museum really helps that process because they say, ‘come and play, don’t look at these things in glass boxes’.
Bar none, one of the greatest experiences of my life. It’s been a good year.

What do you have planned for 2018, and can we expect to see you over in the UK/Europe soon?

As this new record evolves, there will be more guitar. It will be almost like a duet between me and a guitar on the next album, whereas the first one I had to prove I could write songs. We constantly evolve and I think, right now I’m in the phase of finding people around the country who are going to let me. And, let me do it forever. I don’t want 15 minutes, I don’t need the TV spot, just let me create something that might change somebody’s life at some point.

We’ve hit all the big goals so far, I wanted to tour internationally and get regional airplay on at least one tune.

For 2018, one of the big goals is Europe. I think all of Europe would be so open and like, ‘what is this?’, because it’s kind of got that Sam Smith-y thing, with the RnB and guitar, and nothing on the live album is a track, it’s all drums, keys, bass, guitar and my vocal. Europe’s always been more accepting of weird, they let people be weird. And there’s all these incredible people and writers.

I think there’ll be such a great response.

Paul Childers Live At Acme is released on Friday 19th January. Watch the video for Music Pulls You Through below: