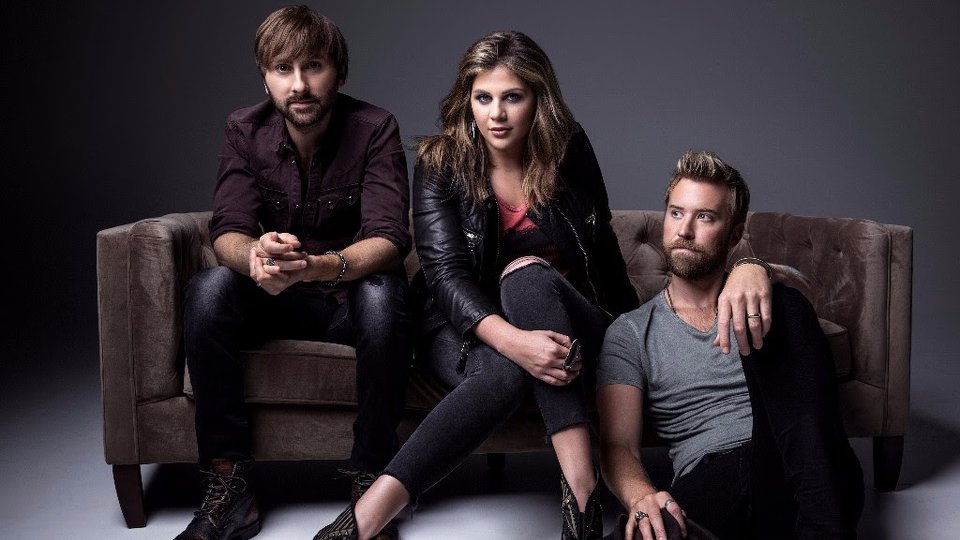 Lady Antebellum’s love affair with the UK has been going on for quite some time and it’s been two and a half years since they wowed C2C: Country to Country as one of the headliners. In that time the trio – Charles Kelley, Hillary Scott and Dave Haywood – have explored solo endeavours before reuniting to release their latest album Heart Break earlier this year. They’ve been on the road with Brett Young and Kelsea Ballerini all summer and last night they made their final stop on the tour at London’s The O2 Arena.

Opening the set with Downtown, Lady Antebellum made it clear that they were up for having a party as it was the last night of the World Tour. The trio were clearly emotional and Scott was giving it her all despite being fairly heavily pregnant with twins. The set list for the evening was a celebration of the band’s career picking out all the hits as well as fan favourites and highlights from Heart Break. As always, Lady Antebellum worked the stage as they delivered flawless vocals and strong harmonies throughout the set.

New UK single This City went down well with the audience as did the title track from the band’s current album Heart Break. Things really kicked up a notch though when the trio delved into their back catalogue starting with a mash-up of Compass and We Owned the Night. American Honey was next up and the audience sang so loudly that for various parts of the song, Lady Antebellum just pointed their mics into the crowd. An emotional rendition of I Run To You was dedicated to the victims and survivors of the Route 91 Harvest Festival shooting in Las Vegas.

Good Time to Be Alive, from Heart Break, lifted the mood once again and served as the band introduction too. It was quite exhausting watching Kelley running around the stage, releasing way too much energy for someone on the last night of a very extensive tour. For Love Don’t Live Here Anymore later in the set, Kelley ran out into the audience, climbed up railings and covered an impressive amount of ground in a short space of time. It was at that point I thought, ‘I’ll have what he’s having!’

Kelsea Ballerini and Brett Young returned to the stage following their respective supporting slots and joined Lady Antebellum for a cover of Shania Twain’s You’re Still the One. They had clearly bonded with the trio as the chemistry was evident and they interacted and joked with one another throughout the performance. It was a nice touch and further proof that Lady Antebellum are some of the nicest people in music who want to champion and embrace emerging talent.

For their encore, Lady Antebellum performed their signature hit Need You Now and a cover of Tom Petty’s Learning to Fly. Both songs gave the audience an opportunity to sing along and it was an uplifting end to a very enjoyable evening.

Lady Antebellum always put on a superb show. I often think they are better experienced live than just listening to their CDs. They have a real energy and chemistry on stage that is infectious, and their passion for their music oozes from them. With Scott giving birth in a few short months, it may well be the last time we see Lady A on these shores for a while but I look forward to their return in the future!