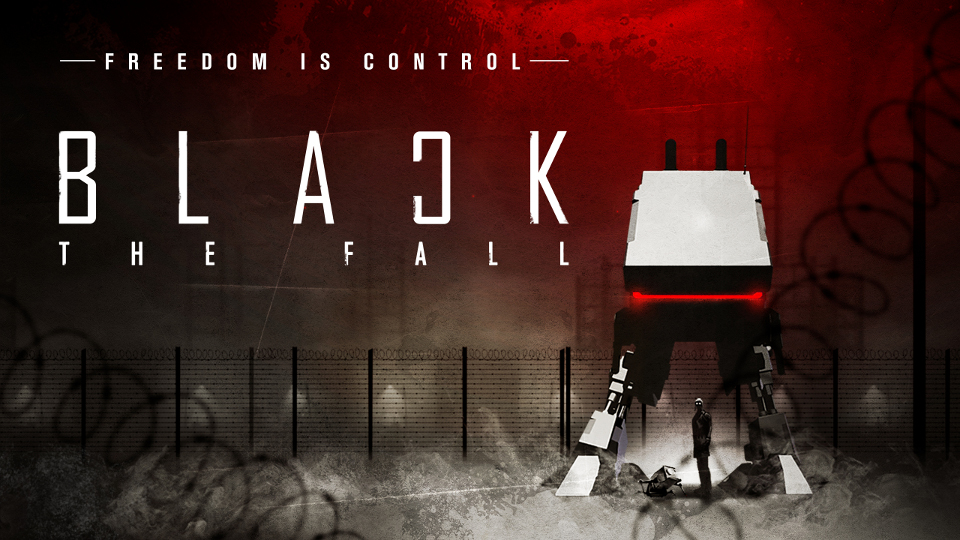 Black The Fall has come to PlayStation 4, a dark, dystopian puzzler from Sand Sailor Studios.

I was excited by this game having been aware of it for some time following its successful Kickstarter campaign at its inception. I was picturing something akin to the Portal games but was pleasantly surprised to find something entirely different. I am not going to get too deep in terms of storyline and many comparisons have been made to Inside from Playdead but I choose to view this game in its own light and review it on its own merits.

The visuals are excellent, the monochromatic effects really add to the industrial dystopian setting as we see our hero, machinist Black, make his way out of the hellish life he has been forced to lead to an eventual redemption. Occasional flashes of colour appear and serve only to reinforce the bleakness of the setting, the injection of bright red laser beams and dark red blood had a similar effect on me as I felt watching Schindler’s List and it’s little girl in red, and the fiery orange glows seeping from below the floors of the factories heightened the oppressive and lonely atmosphere.

The player sees the world as a harsh, cruel place, seemingly revelling in its decay. Black The Fall brings in imagery from classic novels like 1984 and Brave New World and twists them in Kafkaesque fashion to be both subversive and deeply unsettling. It doesn’t take long before you feel completely immersed in the experience and grimly determined to assist in the greatest escape.

Watch the Black The Fall trailer below:

Gameplay is relatively straightforward, the control system works well for the 2D platformer style and the interaction with objects and people as a method of solving the puzzles and problems is smooth and logical. In a way, the ease of control and the methodical way in which the player succeeds and progresses are entirely in keeping with such an industrial and dehumanising game world. There is a definite deliberateness to the way the mechanics work as you would expect to find in a factory such as the one you are attempting to escape from, even the 2D aspect of it feels very much like being on a production line. Unlike other games I have played with a similar style which have been let down by either clunky or overly complex controls, this one enabled me to be completely immersed in the experience without having to second guess either myself or the game mechanics.

As the player through Black explores the factory we are shown disturbing images of other areas of production, each featuring thoroughly dehumanised people and numerous atrocities committed by those in charge. Even when outside the factory the scene is not much improved. The air is stale with toxic pollution and the world appears effectively dead. Armed security cameras track the player’s every move and some of the most disturbing imagery is contained outside the walls of the factory. One that will stick with me for a long time is the ghoulish image of a woman hung from a tree, the lack of background makes this all the more unsettling; either she was unable to take the strain of the subversion of individuality and took her own life, or she was subjected to a lynch mob for an unknown crime. Either way the harrowing image was a shock even given the scenes seen previously.

The puzzles themselves escalate in difficulty as the game progresses and range from simple distractions of guards to the more complex three, four, five step puzzles (e.g. neutralising an enemy, using his equipment to progress but needing to use a third party to open the door) this requires either very careful planning or, quite often, trial and error. With each successful puzzle solved (and the accompanying ‘how did it take me so long to work that one out?’ muttered angrily under my breath) Black moves closer to his escape. The progress is assisted by his attaining a laser pointer with which he can interact with items far away and even control other people within the factory via the red lights above their heads; these people are never freed by Black, nor are they assisted by him in any way often breaking down in tears as the complete tasks. This is perhaps the most enduring image from Black The Fall, its sole interloping into humanity and emotion during which the player is unable and Black unwilling to do anything outside of his objective. Once again, even this has a very mechanised industrial feel to it, a single goal to be attained at whatever cost without unnecessary time wasting or additional risk. The desolate nature of the game is alleviated slightly when you procure a robot dog to assist you, but even this descends from a companion to a tool with alarming rapidity.

View some Black The Fall screenshots in our gallery:

That is not to say that Black the Fall is without its faults. I must say that I found many of the initial puzzles without assistance overly difficult and the whole ‘instant death’ side of the game can become quite frustrating, particularly early on. However, push through that and the game itself becomes immersive and enjoyable. Though the puzzles become more difficult your mind-set adapts to fit in with what the game wants from you and you are able to complete the tasks required. Again, much like the brainwashed workers in the factory (but in an infinitely more enjoyable way!)

There are also issues concerning some of the level design. I found that as I approached various obstacles I could often not make out the signage around it. This led to many unnecessary deaths as I tried to work out the pitfalls which would often become clear as I progressed through better signage in the background where it was uncovered or unobscured. This was frustrating but overall didn’t really dampen my enthusiasm for the game.

Overall, Black the Fall is a great little game. I say little as from start to finish the game took me a touch under 3 hours to complete. Though I was pleased to finish it I was actually quite disappointed, I had hoped that it would last longer and that there would be an opportunity to escape further and see more of what the world had become, though I guess this would be asking a bit too much. It is no surprise that the game is so bleak, Sand Sailor is based in Romania who for much of the Twentieth Century were under the jackboot of the vicious Nicolae Ceausescu whose dictatorship was known to be excessively oppressive even in comparison to the Stalinist Soviet Union. This is further illustrated as the credits roll and we see images of the uprising that finally rid Romania of his tyranny. Black The Fall offers a glimpse into what could have been had he been able to continue ruling and accelerate his collectivisation of the populace. My background and interests are wide and are rooted in history and philosophy as well as gaming and to be able to play through such a stark visualisation of how society could be if extremist dictatorships had been allowed to flourish was an incredible synergy and one that I really enjoyed. Yes there are a couple of minor flaws but overall Black The Fall more than compensates and is a thoroughly immersive and worthwhile gaming experience, one that I would heartily recommend.

Black The Fall was reviewed using a digital code supplied by the publisher.