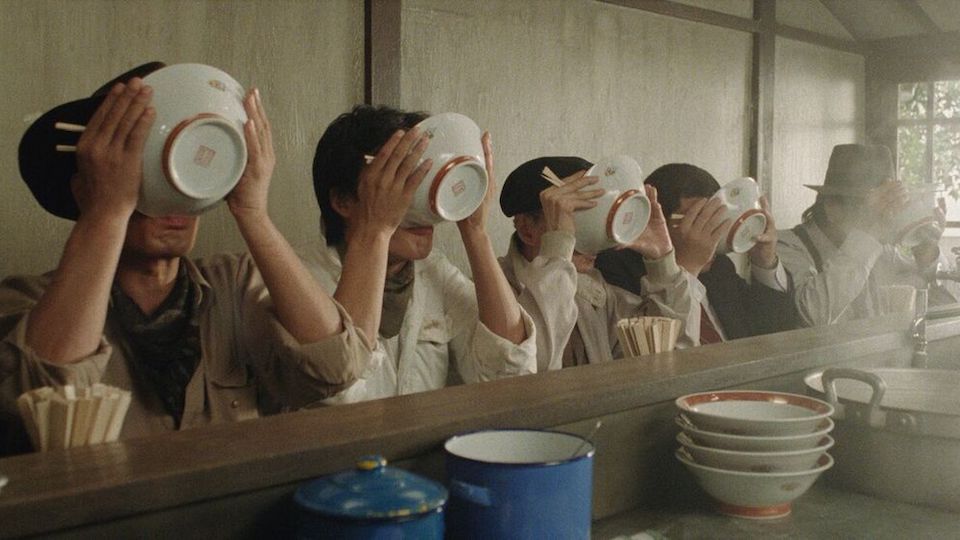 Do not watch this film on an empty stomach. Any attempt to do so will render you incapable of coherent thought, as you charge off into the night in search of the nearest bowl of steaming ramen. Juzo Itami’s raucous and ambitious comedy is many things, but above all it is a love letter to what is our most basic need and also our greatest desire: food.

The main thrust of the film involves Tampopo (Nobuko Miyamoto) the widowed owner of a run down Ramen shop. When cowboy hat wearing trucker Gorõ rolls into town, he gives Tampopo his critical appraisal of her noodles, and she begs him to become her Ramen mentor. You’ve no doubt heard of spaghetti westerns, well this is the world’s first Ramen Western.

In true Magnificent Seven style, Gorõ sets about assembling an unstoppable gang of noodle experts to train Tampopo in the ancient art of soup-making. It’s obviously played for laughs. It is daft, it is bawdy, but it is a helluva lot of fun. It’s also only half the story.

Juzo Itami throws absolutely everything at this film, and in less confident hands it would be a recipe for disaster. But rest assured this is a very tasty broth. The film opens with a smartly suited gangster taking his seat on the front row of a cinema. His men place tables covered in delectable foods and fine wines in front of him. This is surely a breach of the Wittertainment Code of Conduct? Then the gangster starts speaking directly to us, about people making noise in cinemas. Then his film starts, and we find ourselves watching a film within a film within a book, and soon enough we are watching an old man explain the correct way to eat Ramen. “First…contemplate the ramen.” Good advice.

Fourth wall breaking and narrative gymnastics aside, Itami never loses focus of his central concern – the primal and sensual joy of food. As the main story unfolds, Itami takes us on a series of wonderful and extraordinary tangents, including a woman rising from her deathbed to cook her family one last meal, or an etiquette class for Japanese people to be taught how to eat spaghetti quietly with a fork and spoon like foreigners do.

The funniest of these vignettes sees a group of boardroom executives arrive at an exquisite French restaurant for lunch. The chairman orders the most ascetic thing on the menu, and the other men all follow suit. Apart from the most junior executive, a pure gastronome, who indulges his appetites in the most wonderful ways.

As is customary with Criterion releases, the disc is packed with delicious extras, including a 90-minute documentary, The Making of Tampopo, produced the year after the film was released, and narrated by Juzo Itami. There are new interviews with lead actress Nobuko Miyamoto, as well as Ramen scholars, food stylists, and influential American chefs. The disc also includes Itami’s debut short film from 1962, the original trailer, and an essay by food and culture writer Willy Blackmore. This is an excellent release, and looks absolutely stunning in its new 4K restoration.

Taking the humble bowl of noodles as his starting point, Itami created a film about life, love, sex, and death. The entire human experience encapsulated in 114 minutes. To see it, you just have to contemplate the ramen. Tampopo is quite simply a film that cannot fail to leave you with anything other than joy in your heart and a beaming smile on your face. Oh, and a deep rumble in your belly.