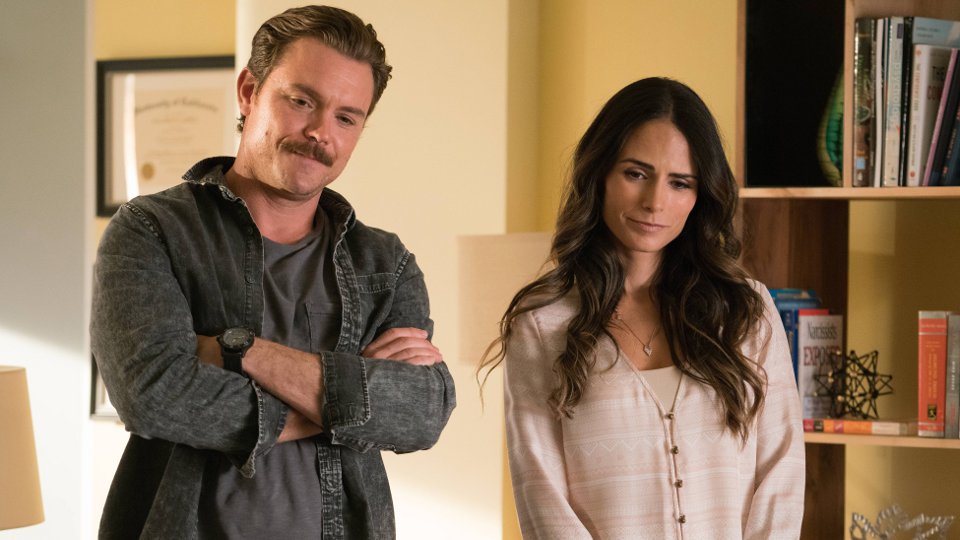 At the start of the episode, a young boy was playing on the beach with his father. The father got a text message and left promptly to go to his hotel room. There a man was waiting for him and said they had a problem. The father pulled a gun out of a bag and shot him dead.

Riggs was waking up from dreams of his wife Miranda taking a shower. As he came out of the dream he realised there was a stray dog relieving itself on his floor.

At Murtaugh’s house he was looking after his baby daughter while waiting for the babysitter. He had the house to himself for the first time in ages as Trish (Keesha Sharp) and Riana (Chandler Kinney) were off looking at colleges. Murtaugh had a night in with the boys planned so was disappointed when the sitter called to say she had food poisoning.

At the office, Riggs fell asleep during a session with Cahill (Jordana Brewster). When he awoke she asked him questions about his dreams about Miranda. As usual Riggs preferred to avoid answering and was soon called off on a case.

The man killed at the start of the episode had been found stuffed inside a suitcase. Murtaugh arrived on the scene with his baby daughter as he had no one else to look after her. Riggs spotted some people passing by looking suspicious and went after them. Murtaugh handed his daughter to Bailey (Michelle Mitchenor) to look after so he could go with Riggs.

Riggs caught up with the people who worked at a sweatshop. He discovered that their son was friends with the dead man. They said he wasn’t involved in drugs. Out the window Riggs spotted a truck being loaded with stuffed soft toys and decided to investigate.

He managed to get hold of a chain on the back of it as it pulled off. He struggled to keep hold of it but Murtaugh arrived on the scene in his car and blocked the truck. The driver ran off so Riggs gave chase before slamming into a car door. Inside was a female DEA agent called Karen Palmer (Hilarie Burton) who said they were interfering with her investigation.

Back at the precinct, Captain Avery (Kevin Rahm) argued with Palmer. She refused to tell him about the investigation so he told Riggs and Murtaugh to keep on the case. Scorsese (Johnathan Fernandez) found some paint on the dead man that matched some paint Murtaugh touched at the sweatshop.

At night Riggs and Murtaugh went back to the sweatshop and broke in without a warrant. Riggs smashed through a fake wall inside and discovered $90 million in cash which Avery seized and announced via a press conference. Palmer told them that her investigation revolved around the money which was being laundered.

Further investigation by Scorsese uncovered some sand which could be traced to a specific beach at a bar. Murtaugh tried to suggest that Riggs could maybe go out with Palmer. CCTV footage at the bar showed the hitman and a rental car.

They tracked the hitman down and found him about to kill Palmer and the people from the sweatshop. Without thinking Riggs smashed his car into Palmer’s which saved her life but the hitman got away.

An interrogation of the sweatshop people gave them the name of a fashion buyer for the cartel. Palmer suggested a stakeout and asked for help from Riggs and Murtaugh. They agreed but Murtaugh requested to take the final shift because of his boys night.

Riggs took the first shift while Palmer slept. Before she did she checked that Riggs had brought himself some food and was shocked to see him produce a can of spray cheese. Meanwhile, Murtaugh had all his boys cancel on him so his night was ruined. He brought the food to the stakeout the next day.

Palmer waited for a good opening to attempt to bug their target but Riggs decided to just go and do it anyway. He went into the fashion shop and asked for a handbag for his wife. Palmer came in pretending to be his wife and they distracted the owner while they placed the bug.

Riggs later got Cruz (Richard Cabral) to pose as a gangster to intimidate their target. It worked and the bug picked up a phone call asking for a meeting. Riggs without a care for his own safety went and hid in her car boot. He took another bug with him so they could track his location.

The woman drove to meet the hitman and he noticed her car was low at the back. He realised there was someone in the boot and fired a shot at it to get Riggs to comply. When Murtaugh and Palmer arrived at the scene Riggs was gone.

The hitman wanted to find out what Riggs and the police knew about him. He killed the woman and tortured Riggs by holding his head in a barrel of water. Riggs didn’t have the answers he wanted but taunted him with his wicked sense of humour. The hitman realised that Riggs was happy to die.

The hitman decided to threaten Murtaugh and his family instead. Riggs managed to break free and a fight broke out. The hitman fled but then cornered Riggs outside with a gun. Murtaugh spotted something as he and Palmer drove around. They went to investigate and Palmer drove over the hitman, narrowly missing Riggs.

Back at the precinct, Cahill was waiting when Riggs returned. He gave her some info on his dreams of Miranda. She gave him some advice to connect with people to help him through. Before he left, Palmer asked him out.

At the end of the episode, Riggs went to see Murtaugh and they had a boys night in themselves. He brought the dog with him which relieved itself on Murtaugh’s floor as the pair passed out.

Watch the trailer for Lethal Weapon 1×08 Can I Get a Witness? below:

The official synopsis for Lethal Weapon 1×08 Can I Get a Witness? reads:

When a million dollar casino heist takes a deadly turn, Riggs befriends the only credible witness, an eight-year-old boy, and takes him into his care. On the flip side, Murtaugh pulls some dangerous stunts in an attempt to prove to everyone that he can be a motorcycle guy. Meanwhile, Riggs contemplates what to do with the money he received from selling his home in Texas.