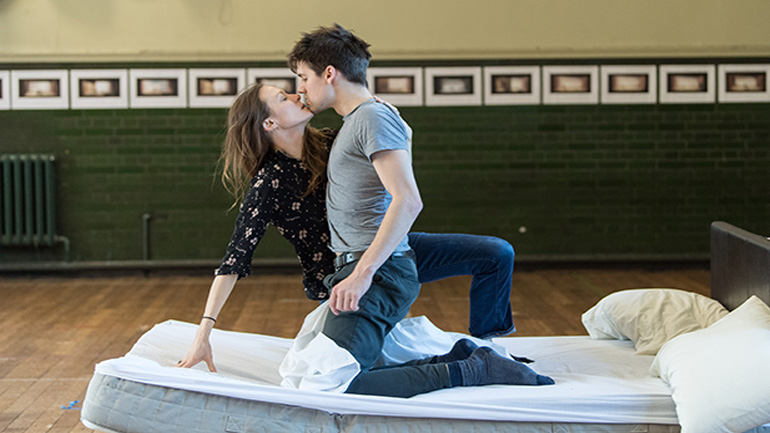 West Yorkshire Playhouse and Curve in association with Simon Friend and Gavin Kalin Productions*1 are set to revive The Graduate, which opens in at the Playhouse in May.

Pictured in character for the first time, Catherine McCormack and Jack Monaghan take up their roles fifty years since the runaway success of Mike Nichols’ hit film starring Dustin Hoffman and Anne Bancroft. Based on Charles Webb’s novel, The Graduate sees an educated young man swept into an illicit encounter with an older married woman, setting them both on a thrillingly destructive course.

Director Lucy Bailey said: “The Graduate is a satire on the values and lifestyle of middle class suburban America. The world seen through Benjamin’s eyes is a heightened surreal version of reality, at times grotesques and absurd. It’s a coming of age play – painfully funny and deeply human.”

Artistic Director of West Yorkshire Playhouse James Brining adds: “Our productions this season return to the journey for voice and identity. Benjamin, the Graduate’s central character, is completely disaffected and alienated until he begins to break with convention and take his own path. In the hands of the talented Lucy Bailey, whose celebrated production of Great Expectations at the Playhouse thrilled audiences, this promises to be a smart and stylish telling, rich in wry humour.”

The Graduate is adapted by Terry Johnson, based on the novel by Charles Webb and the motion picture screenplay by Calder Willingham & Buck Henry by special arrangement with StudioCanal.