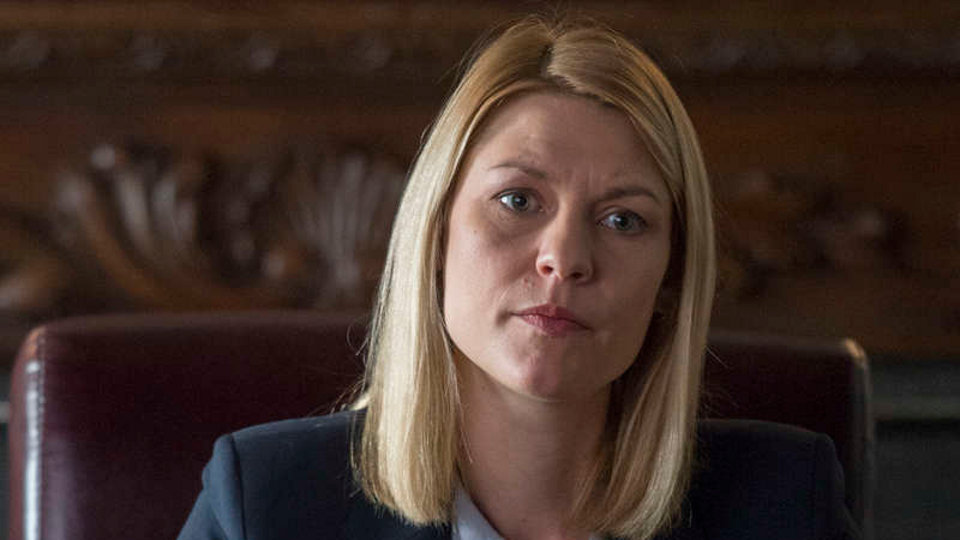 On the latest episode of Homeland, Carrie (Claire Danes) and Quinn (Rupert Friend) made a discovery.

After meeting with Quinn opposite the Flag House last episode, they continued to watch the house. Quinn explained that the man who was watching Carrie’s house was there along with other presumably special ops. He also told her that inside the garage of the house was Sekou’s original van. It had been swapped for one loaded with explosives.

Carrie was delighted at the news and explained that she could make a call to the Solicitor General and bring them to justice. Quinn said the van was for Carrie but that the man was his to kill. After a disagreement, Quinn revealed that he knew about Carrie waking him from a coma in Berlin which caused his stroke.

The next morning Quinn prepped to leave to follow the special ops guys who were moving out. Once they had left Carrie gained access to the flag house with a key Quinn left for her. The house appeared empty but she noticed that the alarm system hadn’t been set.

After finding the van she took a look inside and found a photograph of Sekou and his family behind one of the sun visors. As she moved back into the house, Carrie was attacked by the man. She put up a fight but was soon overpowered.

Lucky for her Quinn burst in and shot the man. He then sat astride him and beat him to death with his gun. Carrie had tried to stop him but failed. Quinn revealed that the man had killed Astrid. Carrie then put a call into the Solicitor General and worked to get Quinn an immunity deal.

Meanwhile, Saul (Mandy Patinkin) paid a visit to President-elect Elizabeth Keane (Elizabeth Marvel) who was making a statement in defense of her son Andrew. She called for the people responsible for making the video to come forward. After the statement Saul gave her evidence that linked Dar Adal (F Abraham Murray) with Brett O’Keefe (Jake Weber).

O’Keefe decided he would come forward and challenged Keane to appear on his show. At Saul’s advice she accepted and really took him to task. She explained to those watching how he had manipulated the video of her son and use bots to create fake reactions to influence opinion. She also revealed the location of his firm and said it was being funded by parts of the government.

Elsewhere in the episode, Max (Maury Sterling) was being held in a room, at O’Keefe’s company, for breaking the rules last episode and taking a phone into the office. Dar Adal paid him a visit and interrogated him but Max gave little up.

Later when a meal tray was brought to Max he found a key card under his milk. Presuming someone was helping him he got out of the holding room and made his way out of the building. As he crossed the parking lot he was grabbed by some men and bundled into a black van.

They delivered him to Dar who requested his help to access the computer of O’Keefe. During a previous visit he spotted a website about Quinn which O’Keefe kept secret. Max hacked into the company backup and found a large amount of data. It was a fake site pretending to be Quinn and showed he was not a fan of Keane.

At the end of the episode, Quinn inspected a partially erased whiteboard in the flag house. He could make out code letters related to the special ops assignment. Worried for the President-elect, Carrie put in a call to Rob (Hill Harper) but struggled to speak with him as he was so busy and the line was bad.

She went outside and noticed the FBI team about to open the garage where the van was stored. She had a bad feeling and shouted for them to stop but it was too late. A hidden bomb exploded, devastating the house and injuring or killing the surrounding FBI personnel. Quinn made his way out and the pair checked for survivors.

Check out the Homeland 6×12 trailer below: