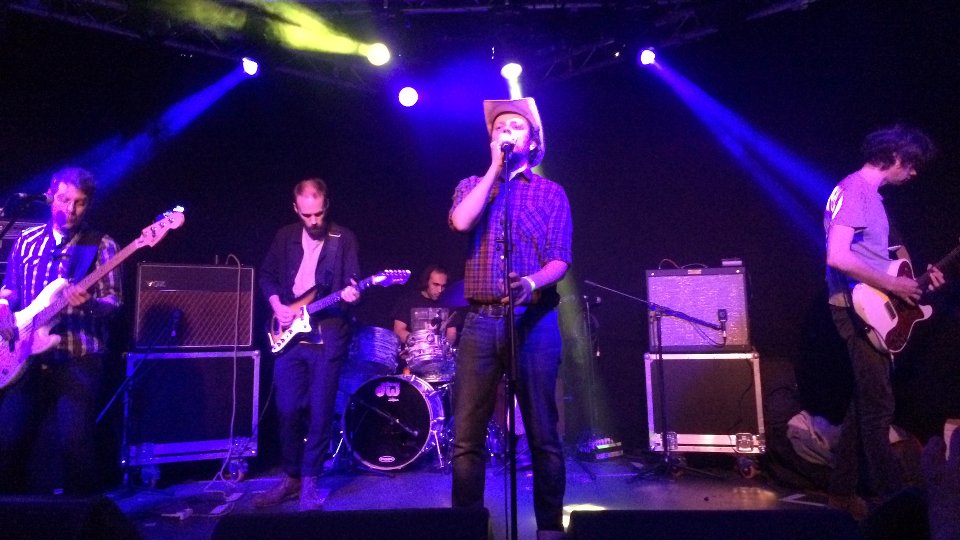 As country music becomes increasingly mainstream in the UK, there are more events popping up all over the country showcasing the best of British talent. This weekend it was the turn of Ramblin’ Roots Revue, a new event with a particular focus on Americana-influenced and more traditional country acts.

I caught the end of Paul McClure and the Local Heroes’ set and have to say they were highly impressive. The room was absolutely packed – indicating a strong local following, which many of the acts at the festival seemed to have – and the band did a great job of keeping the crowd entertained, laughing and joking with them as well as encouraging a singalong on ‘My Little Ray of Sunshine’ (which has been stuck in my head ever since).

Next up were Legends of Country, who I’d been keen to see at C2C this year. Their set was packed full of twang and cheeky lyrics, putting a uniquely British spin on country traditions in tracks like ‘Gone Leaving’ and ‘That’s What We Talk About When We Talk About Country’. The standout songs for me though were the ballads ‘Saturday Dads’, looking at the relationship between a divorced father and his son, and ‘Long Way Back From A Dream’, the tale of a Welsh darts player on the road to Frimley Green.

I’d heard lots of good things about The Rosellys ahead of their set and they didn’t disappoint. Their traditional style married beautifully with the gorgeous harmonies of boyfriend and girlfriend Rebecca and Simon on songs such as ‘A Thousand Miles’ and ‘On The Porch’. Rebecca’s lovely sweet voice also stood out on ‘Don’t Let The Whiskey Win’, ‘No More Dark Days’ and a fantastic high note on ‘Don’t Pull Away’. They had fantastic chemistry together which shone through in their banter with each other and the crowd, as well as in the lovely ‘Something Special’ which Rebecca wrote for Simon’s birthday. I really loved their mix of humorous lyrics and darker subject matter too.

Loud Mountains have been one of my favourite UK country acts since I saw them at the Holiday Hoedown in December, and they’ve come on leaps and bounds since. Despite an ill-advised choice of shirts on the hottest day of the year, brothers Kevin and Shawn showcased their fantastic harmonies and the sheer range of styles they can cover, with everything from rockier numbers like ‘Gasoline’ to more stripped-back slower songs such as ‘Eloise’, via the nostalgia of ‘Too Far Gone’. They got an incredibly enthusiastic response from the crowd and I can’t wait to see what they do next.

Then it was time for Case Hardin, who’ve become something of a staple at these types of events lately. Their lead singer has a great bluesy tone to his voice with just a touch of growl where needed, and I really liked the elements of showmanship they brought to their set with touches of different styles such as 50s rock and roll. The driving rhythms and rocky guitar on ‘Jesus Christ Tomorrow Morning Do I Still Have To Feel This Way’ and ‘The Streets Are Where The Bars Are (The Bars Are Where The Girls Will Be)’ reminded me of The Eagles and it sounded like the kind of music you’d blast from your convertible driving down a desert road. Personally I felt their choice of songs lacked a little variety but it was clear from the audience reaction that that definitely isn’t holding them back.

I’ve been a fan of The Magic Numbers for years so was keen to see what their bassist Michele Stodart could do as a solo act. What really struck me was how she conveyed the emotion in her songs; you could really feel every word on ‘Tell Her’, ‘When Is It Over’ and ‘Wait Fore Me’. Her guitar playing was great too and I loved watching her rocking out with her band on the more uptempo numbers. Plus she built a great rapport with the crowd, bringing us in closer to her and improvising a riff with her band when she was interrupted by an alarm going off! She was definitely my highlight of the day.

Last but not least, I popped over to see Yola Carter, another act whom I’d heard a lot about but had never seen live before. She has a voice I could listen to all day – beautiful and soaring on songs like ‘Home’, yet powerful too on the more emotional numbers like ‘Orphan Country’. I really liked the balance of songs in her set too; she showed that she could do just as well on uptempo numbers ‘Mitch Thompson’ and ‘Gaslight’, whose folky melodies belied their darker lyrics.

Overall Ramblin’ Roots Revue showed the sheer variety of acts the UK country scene has to offer and that there is a thriving and enthusiastic community out there who are willing to embrace it in all its forms. Here’s hoping it makes a return next year!