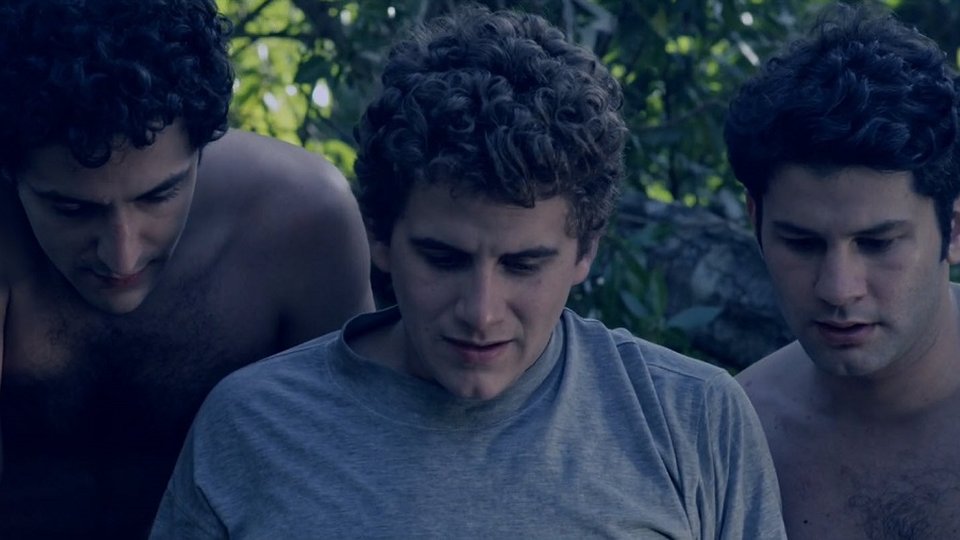 Daniel (Javier De Pietro), Adrian (Agustin Pardella) and Santiago (Marcos Ribas) decide to go camping together and Daniel wants to capture their adventures on his video camera. As the three friends find a location to pitch their tents, the arrival of Julieta (Luana Pascual) causes friction. Santiago and Julieta quickly become a couple, much to the annoyance of Adrian and Daniel. With the friends keeping secrets from one another, it doesn’t take long before the tension threatens to pull them apart and their bond is tested.

Bromance is directed by Lucas Santa Ana who co-wrote the film with Diego Mina. At its heart, the film is a coming of age tale that deals with three young men transitioning from juveniles to adults. It becomes clear early on that Daniel’s feelings for Santiago are more than simply platonic and their evolving relationship is one of the central storylines of the movie. Daniel makes a move, which is reciprocated, but quickly afterwards Santiago busies himself with Julieta, who isn’t convinced that her new beau is being honest with her.

Where Bromance really shows its strength is in the exploration of the friendships between the three central men. At the beginning of the movie they are established as very close friends but as the film progresses you start to realise how little the trio really knows about each other. Daniel’s sexuality seems like a complete surprise to them and when the group starts to suspect he may be gay, they aren’t all that pleasant to him either.

The performances from the three male leads are very good. Javier De Petro, who excelled in the fantastic Absent, is the standout here playing a fine line between endearing and tormented. He brings Daniel’s feelings and struggle to life believably and he really is excellent to watch.

The end of Bromance has come in for some criticism. For my money it ended the way it had to. I don’t want to give too much away but when secrets are revealed between friends, it can make or break a friendship and I actually found the conclusion to be satisfying. In fact there’s room for a sequel to follow-up where the trio goes from that point.

Bromance is a slow-moving but rewarding watch. The small but talented cast keep you hooked and the stunning backdrop is pleasing to the eye (as are the three male leads). The film explores relatable themes that anyone coming to terms with their sexuality will have experienced at one point or another. The dynamic between the friends is at the heart of the film, and there’s no stone left unturned by the time the credits roll.