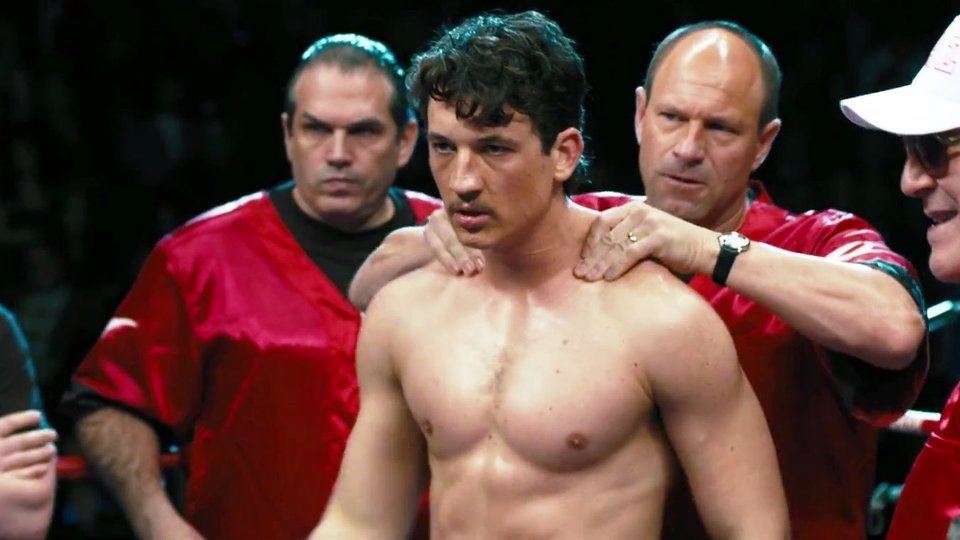 Boxing movies are a tough proposition. Whether fictional or based on a true story, there is very little we’ve not already seen, and they are ripe for cliché. There’s a lot of films already out there about working class bruisers, fighting their way off the streets, and then having one last shot to triumph against the odds. Bleed for This ticks all the boxes for the conventional boxing movie, but as a true story of such an extraordinary comeback – perhaps the greatest in sports history – it is never anything but immensely watchable.

The film starts promisingly, with a glimpse into the life of a boxer that is very rarely documented in films – the battle to make weight. As his opponent waits impatiently at the weigh ahead of their title bout, Vinny Pazienza (Miles Teller) is in his hotel room, wrapped in cling-film, pedaling like a maniac on an exercise bike.

Within the first five minutes, writer-director Ben Younger effectively tells you everything you need to know about Vinny Pazienza. As demonstrated by his attempt to make weight, we know he’s determined. Later that day we see him in the casino playing high-stakes blackjack, so now we also know he’s a gambler. Finally in his press conference before the fight he tells his opponent that he is willing to die in the ring. This all feeds into the decision he makes later in the film.

Vinny loses the fight, ends up in hospital, and is dropped by his manager, who declares to the press that his career is over. With no other options, the washed up Pazienza ends up in the gym of washed up trainer Kevin Rooney (Aaron Eckhart), the man who coached Tyson in his prime. Rooney is now an alcoholic mess. These two underdogs are perfect for each other, and Teller and Eckhart are a terrific on screen double act. Rooney convinces Vinny to fight at his natural weight – two classes above his usual fighting weight, and then starts plotting his comeback. There’s a training montage. There’s a fight. Vinny wins against all the odds. The end….right? You ain’t seen nothing yet.

A few days after winning the title, a car swerves into his lane and Vinny is in a head-on collision, resulting in a broken neck. A fraction away from being paralysed, the doctors advise that he should have his neck fused. It will save his life, guarantee against paralysis, but the reduced movement in his neck means he will never fight again. This is unacceptable for Vinny, who instead decides to have ‘halo’ treatment, whereby a brace is screwed into his skull enabling him to heal naturally, and give him the chance to still be a boxer. The doctor tells him that one punch could sever his spinal cord. But we know Vinny is determined. We know he’s a gambler. And we know he’s willing to die in the ring.

The second half of the film intimately portrays the difficulty of Vinny’s recovery. From the overbearing family not sure how to act around him, to the exhausting and agonizing attempt to lift weights for the first time since the accident. Miles Teller absolutely dominates this film, and you can tell he is pouring every bit of himself into this role, and the comeback theme certainly resonates.

Bleed For This is something of a comeback for him too. Whiplash was an astonishing film, but when Hollywood decided to write the narrative for that film’s success it became the Damien Chazelle and J.K. Simmons show. Teller’s amazing contribution to Whiplash was largely ignored. Then there was the disastrous foray into superhero movies with the Fantastic Four reboot. Then he was cast in La La Land, and then unceremoniously replaced with Ryan Gosling. To top things off there was the cringe-inducing Esquire profile, which led to a lot of snap judgment and ridicule.

This all feeds into his terrific performance as Pazienza. Additionally, for the first time in his career, the facial scars from a car crash in his youth are not covered with makeup, but shown in detailed close-up, adding to the damage of the character.

There’s nothing particularly surprising about where the film goes from here, whether you know the story of his comeback or not. This is a sports film after all. Younger’s portrayal doesn’t show things in quite the way it happened in truth, but it hardly matters. If any story deserves a bit of Hollywood gloss, it is this one.

The disc comes with a decent selection of extras, but nothing particularly insightful. There are two featurettes, one of which focuses on Pazienza’s story, the other is all about creating an authentic world, and making the boxing convincing. Both feature interviews with the main cast and the director. The disc also comes with the theatrical trailer, and a selection of deleted scenes.