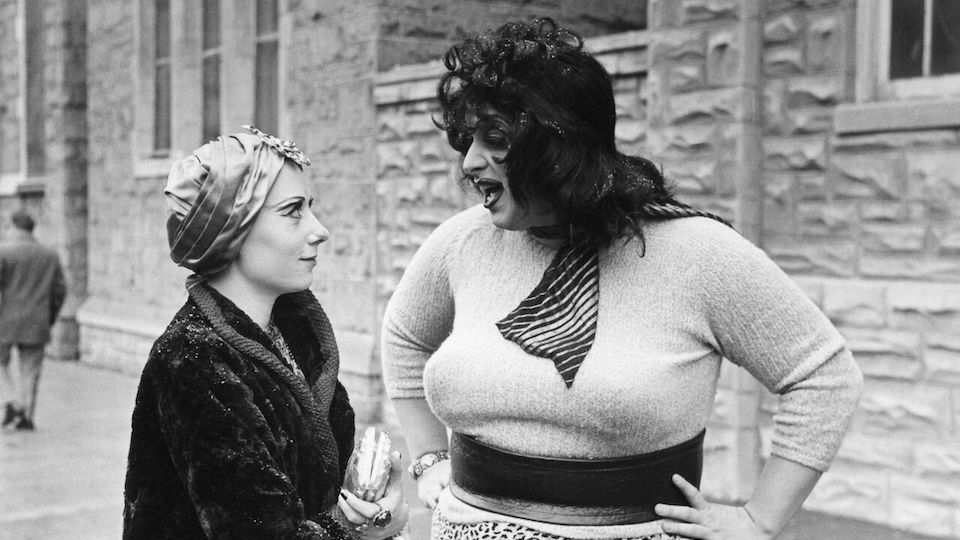 Where does one even begin to try and review Multiple Maniacs – John Waters’ second feature length film? A film that exists so far outside the realm of conventional cinema it defies all criticism. A film made by outsiders, for outsiders. On first release it played on the underground cinema scene, to audiences of hippies, bikers, and speed freaks. Watching this now, on a pristine Criterion Collection blu-ray somehow seems wrong.

Taking inspiration from the Tate murders, and the Manson family in general, Multiple Maniacs sees Waters’ regular muse Divine (performer and drag queen Harris Glenn Milstead) as the leader of a travelling freakshow: Lady Divine’s Cavalcade of Perversions. The show – featuring puke eaters, armpit lickers, live sex, and a convulsing smack head trying to go cold turkey – is just a ruse however. The show’s MC, Mr. David (David Lochary) lures in the squares, straights, and rich pigs, so that Divine and her merry band of murdering, thieving freaks can rob them. And kill them if necessary.

There’s no technique evident anywhere in this film. From the hilariously shonky opening credits onwards, there is no real skill on display. Everything looks and sounds amateur. The camera work is terrible, constantly going out of focus. Then you’ve got the actors fluffing their lines, repeating themselves, and improvising all over the place. It is, as the tagline suggests, a celluloid atrocity.

But this is all utterly beside the point. John Waters is a cinematic provocateur, not a serious filmmaker. Certainly not when he made Multiple Maniacs anyway. Even as he matured and moved into making more commercial films in the 80s and 90s, such as Cry Baby, Hairspray, and Serial Mom, he didn’t suddenly become Fellini. But then Fellini never filmed a sex scene in a church between a lesbian and a 300lb drag queen having rosary beads stuffed up her arse.

This film might be trash, but that was entirely Waters’ intention. The end of the 60s was a different world. This was the time of Warhol, Vietnam, Manson, and experimentation. The peace and love era was fading into something nastier and more paranoid. Waters wasn’t trying to create a work of art, he wanted to make something that would shock, and appall, and alienate those daring enough to sit through it. And if you do sit through it, you are treated to a final ten minutes that is so unexpected, and so original, it makes the entire sleazy enterprise worthwhile. I won’t spoil the ending here, but if you don’t know what happens, please don’t look it up. It ain’t divine, but it sure is special.

The disc comes with a newly restored 4K image, adding a ridiculous sheen to the grotesquerie. Waters himself supervised the restoration, and commented that it now looks like a bad Cassavetes film! Waters provides a commentary, recorded exclusively for this release in 2016. There are new interviews with the cast and crew, as well as the original trailer. Also on the disc is a video essay created by film scholar Gary Needham, plus an essay by critic Linda Yablonksy.