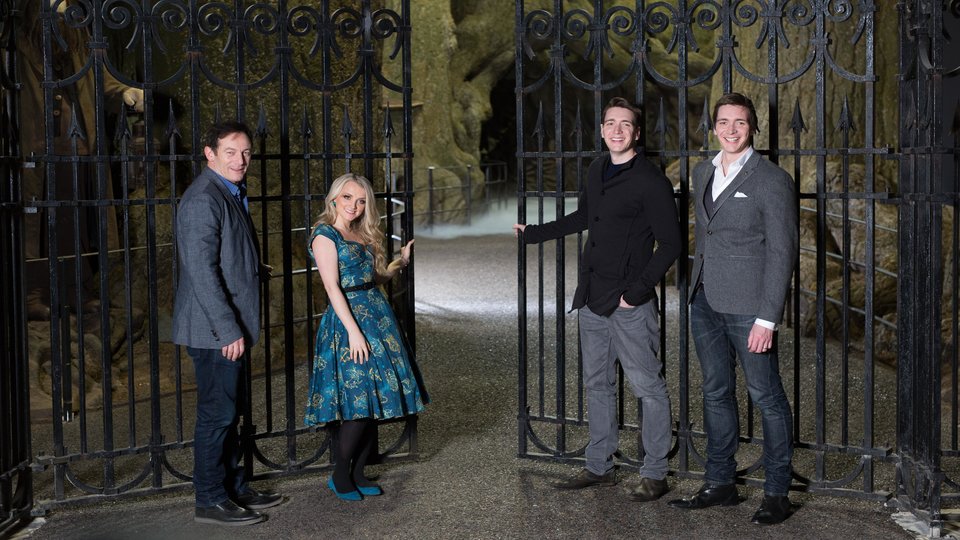 The stars of Harry Potter made it down to the brand new attraction that will launch soon at the Warner Bros. Studio Tour London – The Making of Harry Potter.

From the moss on the giant trees to the hairs on Aragog, finishing touches are currently taking place to ensure that the Forest is ready for the official opening on 31st March.

Entering this impressive set through the Hogwarts Gates, visitors will venture deep into the forest, filled with 19 enormous trees, each with a diameter of over 12 feet and walk beneath the giant entwined roots. On their journey they will pass a bowing Buckbeak and come face-to-face with Aragog, the huge spider, along with his family of spiderlings.

Evanna Lynch commented: “It’s so exciting to step in to the Forbidden Forest again; Production Designer Stuart Craig has perfectly recreated the mysterious and sometimes menacing atmosphere we all felt during filming in the ‘off-limits’ location. Being inside the forest surrounded by magical creatures always felt like a safe place for my character, Luna, so it’s amazing to be back.”

Home to an abundance of creatures, the Forbidden Forest offers shelter and protection to Hippogriffs and Acromantula among many others. It is also well known to beloved half-giant Hagrid in his role as Care of Magical Creatures professor. One of Rubeus Hagrid’s original costumes will be on display, lantern in hand, to welcome visitors through the Hogwarts Gates deep into the forest. Visitors will even be able to control the weather using the same techniques created by filmmakers.

Amongst the imposing trees, visitors will encounter a full size model of Buckbeak, which is new to the tour, and have the opportunity to bow to the majestic creature. They will see up close the incredible detail and craftsmanship that went into creating the magnificent Hippogriff. Each feather had to be individually inserted and glued by the Creature Effects team who were busy adding feathers right up until the final moment Buckbeak was needed on set for Harry Potter and the Prisoner of Azkaban.

As visitors venture deeper into the depths of the forest, they will come face-to-face with Aragog, the Acromantula. Emerging from his dark lair, the enormous spider will appear before visitors along with spiderlings from his family. Created by Nick Dudman, Creature and Make-Up Effects Designer, with help from Production Designer Stuart Craig, Aragog had a leg span of over 18 feet and was even able to crawl out of a hole and deliver dialogue in Harry Potter and the Chamber of Secrets.

Sarah Roots, Senior Vice President, Worldwide Tours commented: “We are so excited to launch the Forbidden Forest expansion of the Studio Tour, especially on the fifth anniversary of our grand opening. It’s great to be working with so many of the original filmmakers who know so much about the wizarding world. There will be an opportunity to take control of the weather and discover the techniques used to create a realistic forest within a film. We can’t wait to let visitors step into this mysterious set and discover all this amazing detail for themselves.”

Stuart Craig, Production Designer on all eight Harry Potter films, added: “Over the course of the eight films, the Forbidden Forest has played a key role and I think it’s an exciting addition to the Studio Tour. The Forbidden Forest is full of mysterious, fascinating and sometimes threatening forces. It represents the great unknown compared to the comfort and safety of Hogwarts and the Gryffindor Common Room which makes it so interesting and important to the development of the story.”

The Forbidden Forest will open on Friday 31st March and entrance will be included in the ticket price.

Warner Bros. Studio Tour London – The Making of Harry Potter opened its doors on 31st March 2012. The unique attraction offers visitors the ultimate chance to get up close to authentic sets, discover the magic behind spellbinding special effects and explore the behind-the-scenes secrets of the Harry Potter film series.

Highlights include walking through the Great Hall where so many famous scenes were shot, seeing the treasures stored in Dumbledore’s office and strolling down Diagon Alley. Tickets must be pre-booked at www.wbstudiotour.co.uk or by calling the Studio Tour’s Visitor Services Team on 0345 084 0900 and cannot be bought at the attraction.

Check out some behind the scenes videos below;