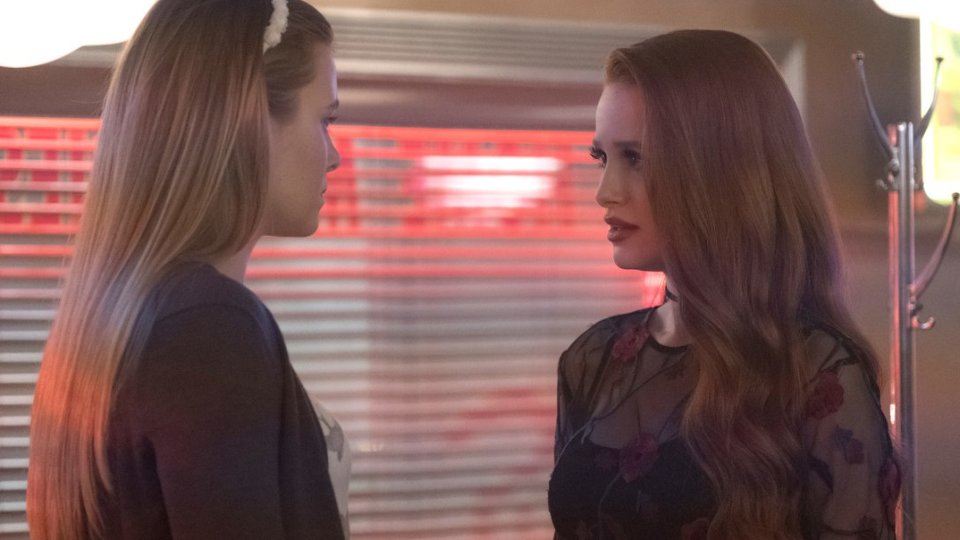 After looking through her mum’s handbag, Betty found out where her sister Polly (Tiera Skovbye) was being kept. They tracked her down and found that she was heavily pregnant with Jason’s child. Betty informed her sister of Jason’s death and was interrupted by her mother who took her home.

Betty confronted her parents and asked her father if he murdered Jason. They both denied any involvement so Betty returned to her investigation. After sharing an unexpected kiss with Jughead, Betty found a car hidden in the woods full of Jason’s belongings. Jughead took pictures and then went to get the Sheriff but when they return the car was on fire and Polly had escaped from the institution.

Elsewhere Archie (K.J. Apa) battled with nerves ahead of his performance at the Riverdale High annual variety show and upset Veronica (Camila Mendes) after choosing to work with Val (Hayley Law) instead.

Meanwhile Val fell out with Josie (Ashleigh Murray) over the amount of time she was spending with Archie, Hermione (Marisol Nichols) forged Veronica’s signature to award Fred (Luke Perry) a lucrative contract and Veronica joined Josie and the Pussycats.

The next episode of the season is Chapter Seven: In A Lonely Place. When a major piece of evidence is mysteriously destroyed, new rumours begin to swirl as to who was really behind Jason’s murder.

Tune in to The CW at 9/8c in the US on Thursday and Netflix in the UK on Friday to see the episode. Preview it with our gallery below: