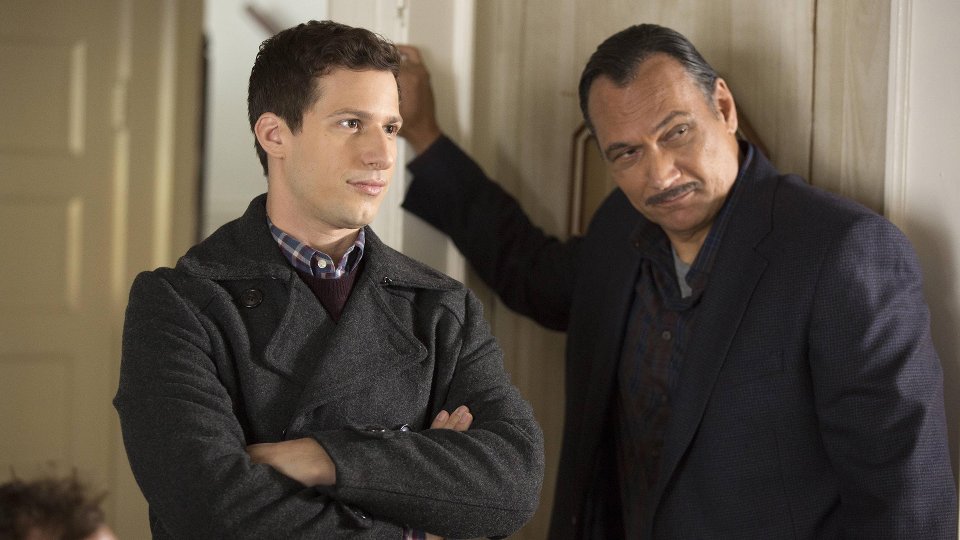 Last weeks double bill kicked off with Halloween IV as Peralta (Andy Samberg), Santiago (Melissa Fumero) and Holt (Andre Braugher) fought against one another to prove who was the true detective/genius in the team. Peralta picked Gina (Chelsea Peretti) to assist him while Santiago chose Diaz (Stephanie Beatriz) and Holt selected Boyle (Joe Lo Truglio).

Gina fooled everyone by pretending to knock her teeth out and secretly playing them all as she hid replica trophies for them all to find. After locking them in an interrogation room, Gina revealed what she’d done and demanded the award be changed to reflect that people who weren’t detectives could win.

In the second episode Monster in the Closet, Pimento (Jason Mantzoukas) returned and Diaz decided to get married. Santiago was put in charge but got frustrated when the rest of the team didn’t do what she asked; Holt built a balloon arch and Diaz got drunk along with Boyle. Peralta and Gina meanwhile accompanied Pimento to retrieve his grandmother’s earrings from a pawn shop.

In the end Pimento and Diaz got cold feet and decided not to marry as they hardly knew each other.

The next episode of the season is Mr Santiago. Peralta goes to extremes to impress Santiago’s dad at Thanksgiving dinner. Holt helps Pimento deal with no longer being able to work for the NYPD.