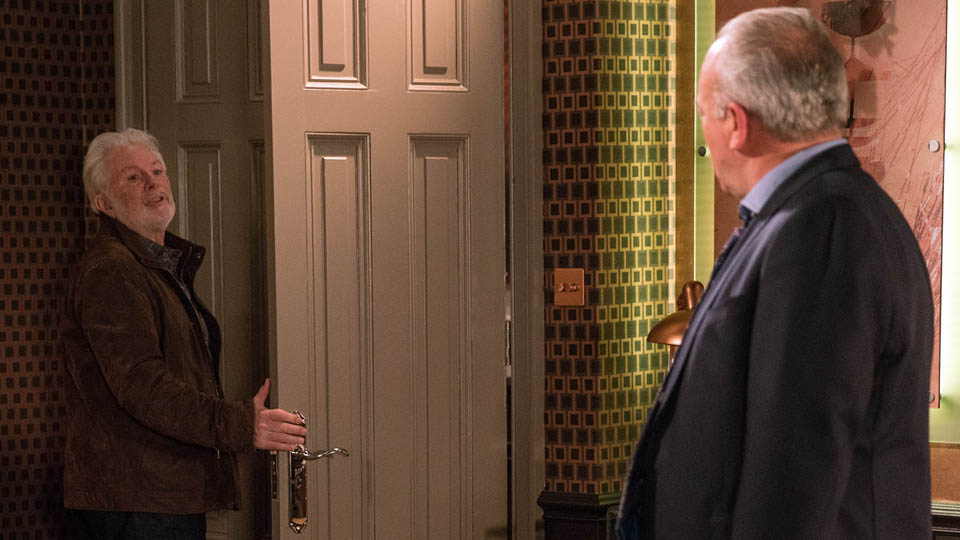 Welcome to our weekly look ahead to what’s happening in Emmerdale this week and it’s courtroom drama for Lachlan and Joanie, Tracy tries to help Finn move on and Pierce isn’t happy.

Will Lawrence make it to court?

Zak and Lisa worry about Kyle who seems withdrawn.  Lisa suggests that it’s his recent lack of stability that’s causing him to be down, but Cain is determined Kerry won’t be part of Kyle’s life.  Later, though when Kyle is playing up, Cain shocks them both by raising his fist!  Cain has a decision to make…

Cain’s fury extends to Chrissie this week also when he tells her he wants her share in the garage or Lachlan will suffer the consequences.  Lawrence and Ronnie are distraught to hear that Lachlan has been beaten up in prison – twice!  They assume Cain is behind it but Rebecca thinks he is just bluffing.  Cain decides to take things a step further and visits Lachy in prison telling him to take his advice or he’ll die.

Chrissie is tearful as she tells Lawrence that Lachlan has been attacked again and decides she has no choice but to sign the garage over to Cain, before Lachlan makes a confession.  Ronnie is shocked to learn that Lawrence went along with framing Andy and storms out.  Meanwhile, Lachlan is shown a way to get out of jail, but will he do it?

As Lawrence’s court appearance dawns he’s heartened Ronnie has come back to support him and Lawrence tells him that he’s going to take the blame.  Ronnie refuses and locks Lawrence in so he can’t do anything stupid.  There’s tension in the courtroom as everyone awaits Lawrence’s arrival but how will he get out of the locked room to make it to court?  What will happen to Lachlan if Lawrence doesn’t take the stand?

Tracy tries to help Finn get over Kasim

Finn is miserable as he waits for Kasim to call him and Tracy decides she’s going to cheer him up.  She’s sick of him wallowing in self-pity and books him a haircut.  She accompanies him to the salon and Kerry is left open mouthed when fit guy, Nathan enters too.  Will he catch Finn’s eye and is this all a bit too much of a coincidence?

Later, Pete and Emma are pleased to hear that Finn’s got a date, completely unaware Tracy has hired a male escort.  Finn sees Kasim at a bar and in an attempt to make him jealous, shows off that he’s on a date with Nathan, who is sat on the corner.

Tracy is concerned when Finn tells her that he’s got a second date with Nathan lined up.  Will she come clean?

It’s Hunk Night in the village this week, but Rhona is flagging and is aware she needs to find some energy for the night.  When she finds herself home alone with Pierce she suggests they make the most of it, but how will he respond to finding her ticket to the Hunk Night?  He tells Rhona he’s going to work leaving her confused as to his mood.

At Hunk Night, Pierce keeps calling Rhona only for Vanessa to confiscate her phone leaving Pierce anxious.  He heads to the pub and is loitering outside until he hears Rhona’s name called out and heads in to see her dancing on stage with one of the hunks.  He’s far from happy…

Birthday girl Charity gets a business idea from a misjudged visit to the B&B with Chas.  What has she planned and who’s toes is she going to be stepping on?

Frank comes to Megan’s aide seeing that the guy she crashed in to is trying to scam her; winning over Jai.

It’s Joanie’s sentencing and Zak guiltily turns up to support alongside Kerry who has to break the news of the outcome to the rest of the village.

Nicola takes an interest in the business and is fired up after spending time in the portacabin.  Jimmy is dreading her interfering and Robert is unimpressed to see Nicola barking orders, but can she win him round?

When Chrissie stands up Rebecca she turns to Ross to amuse her only for Chrissie to walk in on them.  Will the sisters resort to war?