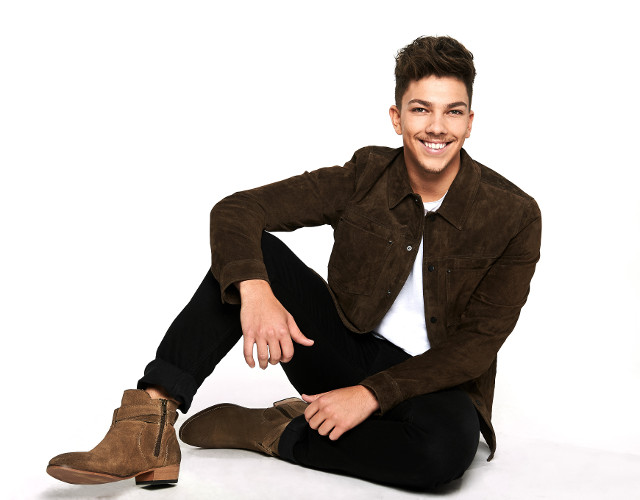 Following weeks of relentless competition, Matt Terry has been crowned The X Factor 2016 winner. The young singer sang in front of 10,000 fans at Wembley Arena and a TV audience of millions at home during the show’s final.

Matt is now releasing his debut single, When Christmas Comes Around, which was written by Ed Sheeran and all proceeds are in aid of children’s hospice charities, Together For Short Lives and Shooting Star Chase. I caught up with Matt Terry after his win to chat about the new single and the upcoming journey he is embarking on. Keep reading to find out how it went.

Hey how are you doing?

I am not too bad how are you?

I am great thank you.

Congratulations on winning the X Factor 2016!

Thank you very much I still can’t believe it.

How did you celebrate?

I haven’t celebrated yet but I am going home this weekend to see my family and I’ll be able to celebrate with them.

Is there a party planned for you?

Maybe a gathering at home would be really nice. I would love to see all my family that would be pretty awesome.

What was going through your mind before they announced you that you won?

I thought I was going to come second. I walked on stage put my head down, closed my eyes and shut everything down. When I heard my name I was in so much shock, my legs fell numb and I fell to the ground. It was pretty wild.

You had a pretty strong competition. How did you prepare each week?

For me it was about picking the right song and connecting with the lyrics. I liked to make sure that I knew the songs at the beginning of the week and I wanted to know what I wanted to do with the track and be ready to sing and perform by the weekend.

Did you want to know the songs inside out?

How did Nicole Scherzinger, your mentor help you each week?

Nicole was very hands’ on, she helped me out with everything. We listened to the songs and chose the ones that suited me better. She always made sure I had a few options and we would pick the ones we loved the most, depending on how we were feeling. She was great and I definitely feel like I hit the jackpot with her.

What was your scariest moment on The X Factor?

Probably being in the bottom two in the semi final and I just got through. I was really nervous but I gave it my everything and I am so glad I did.

Definitely dueting with Nicole and singing Purple Rain during the final that was the best thing ever and something I will never forget.

Can you tell me about the single?

Absolutely, for starters I can’t believe I have a single. It’s a charity single written by Ed Sheeran supporting two charities for children with or born with disabilities and illnesses. The charities also support the parents and families of the children. I got to visit the charities and the children and they do an amazing job. It’s really important and I hope the single brings them everything they need.

Is charity something you are passionate about?

Absolutely, I remember speaking to Sharon in my first audition and how I said that I wanted to help people and use my influence to do positive things. I feel like its really important to give back. I am glad the single is doing well because it means a lot to the charity.

Did you have any input in the writing of the single?

No, Ed Sheeran wrote it and gave it to The X Factor but I am so grateful I got to record it and release it.

How long did the recording process last?

Not very long at all, it took about an hour to record. We got sent the song three weeks ago I learnt it and went into the studio and put my own spin to it. I was really happy with it and it motivated me.

Would you like to take part in the writing process?

Definitely, I can’t wait for next year when I start recording my album. I want to get involved and write with people.

When will you start recording the new album then?

At the beginning of the year I am going to be meeting with the team and see what we come up with.

Do you know who you will be writing with at all?

I have no idea (laughs) but the minute I know I will let you know.

Who would you love to write with if you got the chance?

Probably my vocal coach from the show, Ian James, he is an amazing writer and to write with him would be incredible.

What are the plans for the rest of the year?

I will be doing a few gigs but mainly I will be going home to spend time with my family. I can’t wait to see them all

Who did you spend a lot of time with in The X Factor house?

Throughout probably, 5 After Midnight and till the end they were just great. They became like my brothers and I am definitely going to miss living with them.

Who are looking forward to see the most at home?

Definitely my mum, dad and brothers, and my dog, it’s been three months so we have a lot to catch up on.

Are you looking forward to going on tour next year?

I am excited to be reunited with everybody and go on the tour and experience it again all together. It will be wicked.

As the latest winner, what would your advice be to someone thinking of going on the show?

Definitely do it and give it everything you got! If it’s something that you want and dream of just keep on going and never give up.

Thank so much for your time.

Thank you so much and have a really good Christmas and a Happy New Year.

You can watch the video for Matt Terry’s new single, When Christmas Comes Around below:

When Christmas Comes Around is out now and released via Simco Limited.

In this article:Matt Terry, The X Factor